A large blue and white ‘bajixiang’ moonflask, Qianlong six-character seal mark in underglaze blue and of the period (1736-1795

A large blue and white ‘bajixiang’ moonflask, Qianlong six-character seal mark in underglaze blue and of the period (1736-1795 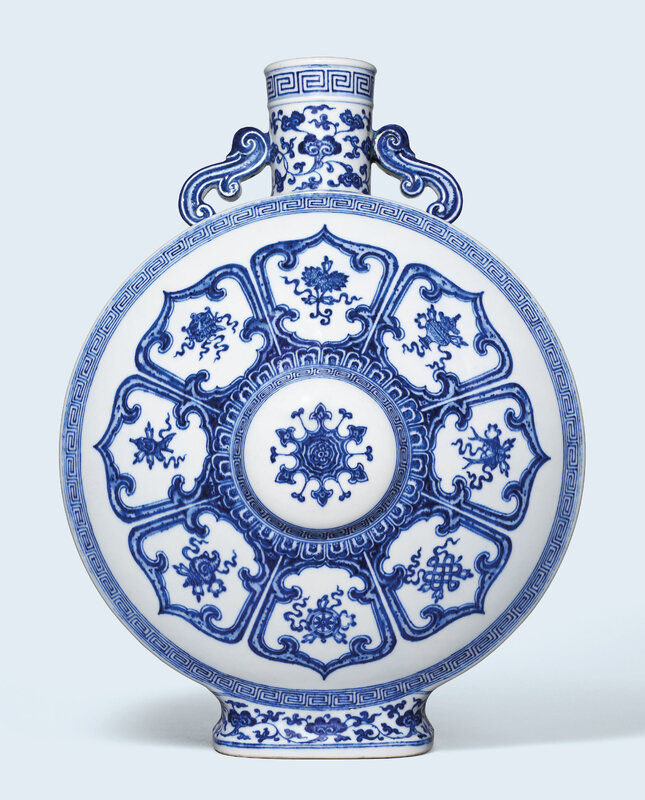 The moonflask is finely painted on the front and back in underglaze blue with eight lotus petal-shaped panels, each enclosing one of the bajixiang, Eight Buddhist Emblems, radiating from a central raised boss decorated with a stylised flower-head and divided by key-fret and lappet bands. The narrow sides are decorated with a band of stylised lotus scroll. The neck, flanked by a pair of scroll handles, is painted with lingzhi scroll and with a key-fret band at the rim, which is similarly repeated on the slightly spreading foot, box.

Note: The form of these large Qianlong flasks is based on Ming-dynasty fifteenth century prototypes, which had a convex side that was decorated and a flat unglazed back with a countersunk medallion in the centre. For a Yongle (1403-24) example see the flask in the Freer Gallery of Art, illustrated in Oriental Ceramics, The World’s Great Collections, Tokyo, vol. 9, 1981, no. 94. These fifteenth century blue and white porcelain flasks were themselves based on silver-inlaid brass prototypes.

Commentaires sur A large blue and white ‘bajixiang’ moonflask, Qianlong six-character seal mark in underglaze blue and of the period (1736-1795