A fine and rare enamelled and copper-red decorated water pot, matizun, Kangxi six-character mark in underglaze-blue and of the p

A fine and rare enamelled and copper-red decorated water pot, matizun, Kangxi six-character mark in underglaze-blue and of the p 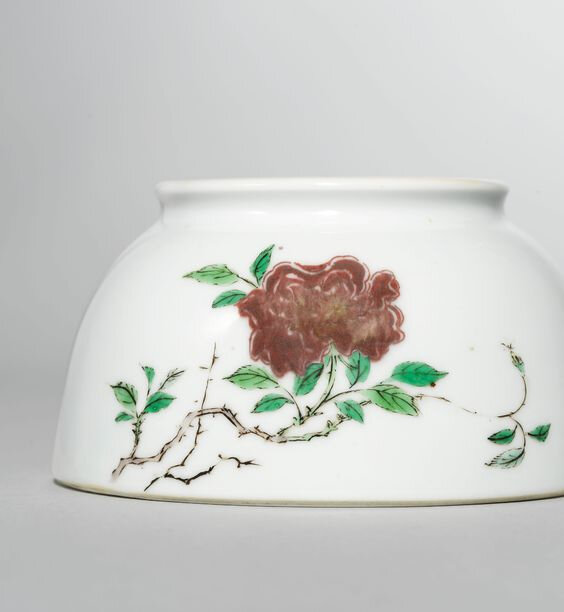 The steep incurved sides terminating in a wide mouth with lipped rim, each side painted with a rose in bloom rising on leafy stems from the foot, the flowers in copper-red with the leafy stem in green enamel detailed in black, the interior and base glazed white, box.

Note: Similar examples bearing Yongzheng marks are found in museums and private collections worldwide, including one in the Victoria & Albert Museum, illustrated by Rose Kerr, Chinese Ceramics, Porcelain of the Qing Dynasty, 1644-1911, London, 1986, no. 86; one smaller (11.3 cm.) in the Shanghai Museum of Art, illustrated in Selected Ceramics from the Collection of Mr. and Mrs. J.M. Hu, Hong Kong, 1989, no. 48; one illustrated in the exhibition catalogue, Ch’ing Porcelain from the Wah Kwong Collection, Hong Kong, 1973, no. 87; and several sold at auctions, such as one sold at Christie’s Hong Kong, 27 November 2013, lot 3430; and another sold at Christie’s Hong Kong, 6 October 2015, lot 149.

A further example is illustrated by T. Bartholomew, ‘Botanical Puns in Chinese Art from the Collection of the Asian Art Museum of San Francisco’, Orientations, September, 1985, pp. 18-34, no. 24. The author also explains that the scene depicted invokes the traditional Chinese birthday greeting ‘May your happiness be as deep as the Eastern Sea and may you live to be as old as the Southern Mountain’.

Commentaires sur A fine and rare enamelled and copper-red decorated water pot, matizun, Kangxi six-character mark in underglaze-blue and of the p