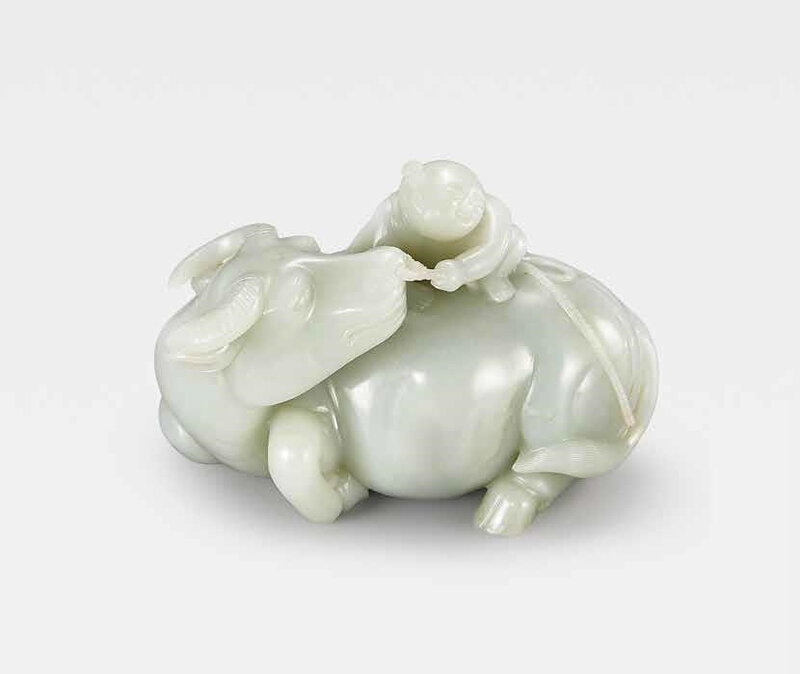 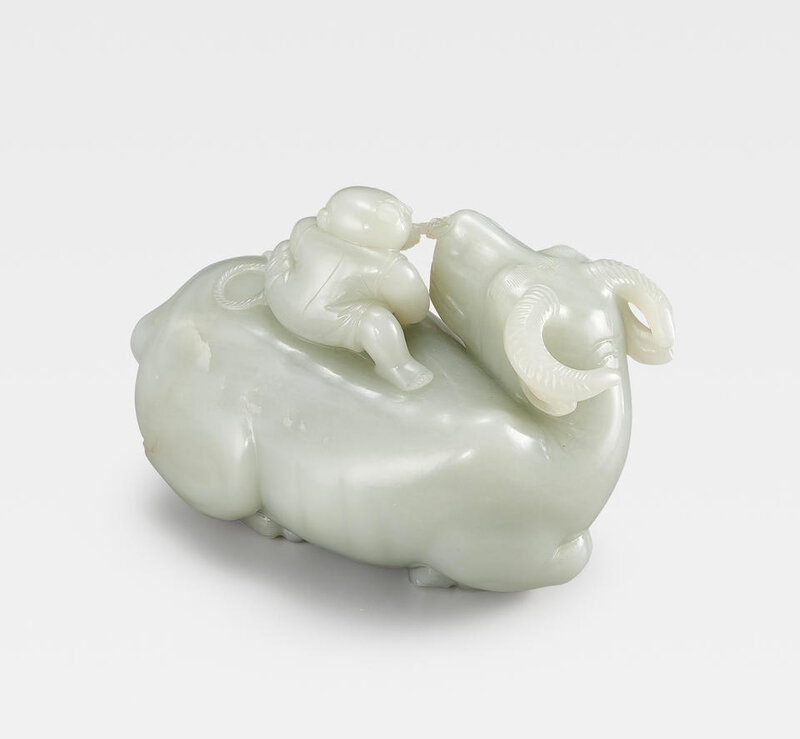 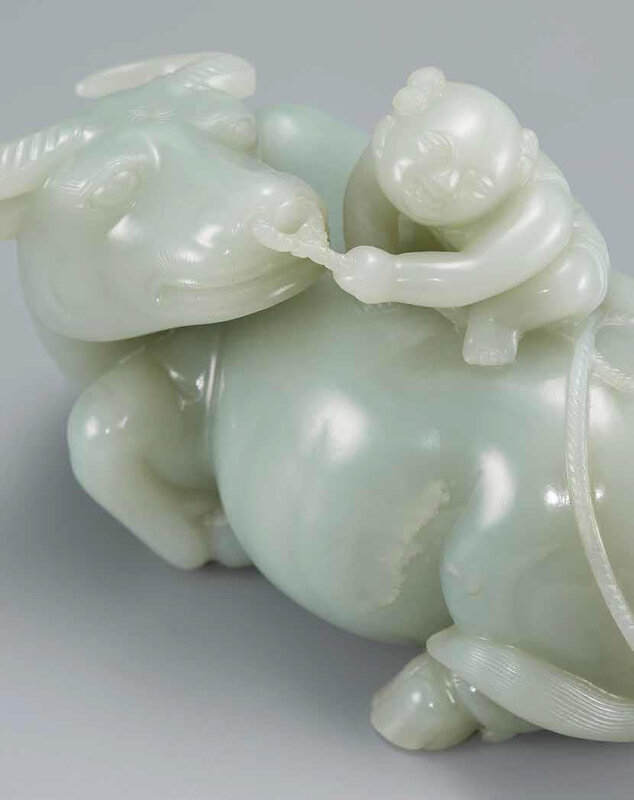 The smoothly-polished stone exquisitely carved in the round as a recumbent buffalo with its head turned to the left gazing at a boy playfully clambering on its back, the boy supporting himself with one hand on the animal's back and the other holding a rope trailing from the animal's nostrils, the ridged horns delicately depicted resting on the finely hollowed ears, the powerful body accentuated by a pronounced spine, the stone of an even pale green tone. Note: The present lot is masterfully carved from a single pebble of the evenly-toned jade stone, where the superb craftsmanship of the imperial jade lapidaries is represented in the simple and elegant form, yet skilfully detailed in its naturalistic contours, the ribbed horns, finely incised forelock, undulating dewlap and well detailed legs.

Compare with a smaller but similarly carved group from the Qing Court collection, illustrated in the Compendium of Collections in the Palace Museum, Jade 9 Qing Dynasty, Beijing, p.145, no.135. Another 18th century example with the boy standing beside a recumbent water buffalo and holding one of its horns was included by The Metropolitan Museum of Art New York in the exhibition A Passion for Jade: The Heber Bishop Collection, 2015, no.20, acc.: no.02.18.438.

Another example of similar subject matter from the Beijing Art Museum, with a boy holding a flute, his hand on the horn of the water buffalo, is illustrated in Gems of Beijing Cultural Relics Series, Jades, Beijing, 2002, p.190, no.221. See also a white jade buffalo and boy, Qianlong, from the collection of Anthony K.W. Cheung, illustrated in Virtuous Treasures, Chinese Jade for the Scholars Table, Hong Kong, 2007, pp.170-171, no.96.

Early jade carvings are closer in form and function to the imaginary protectors carved in stone, which may be a reflection of jade's traditional association with immortality and spiritual power. It is not until the Song period that jade was more generally used as a material for sculpting the creatures of daily life, and whose use was not restricted to assisting in the afterlife. Such jade carvings tend to have softer, more appealing and realistic features, and often a sense of playfulness such as the present lot.

As a familiar beast of the fields, the buffalo underpinned rice production and the rural economy. As such it is emblematic of agriculture and spring time, and represents strength, endurance, dedication to hard work, prosperity and tranquillity. It is also used in artistic representation, in particular in Chinese paintings, to evoke a bucolic, idealised existence in the countryside. This in turn feeds into a more mythical or spiritual side to the buffalo, recalling both Buddhist and Daoist concerns with simplicity and retreat, and the founder of Daoism, the philosopher Laozi, who departed from the borders of the known world on a buffalo.