"Passion for Form: Selections of Southeast Asian Art from the MacLean Collection" at Heritage Museum of Asian Art, Chicago

"Passion for Form: Selections of Southeast Asian Art from the MacLean Collection" at Heritage Museum of Asian Art, Chicago Southeast Asian pottery, bronze and sculpture have long fascinated the MacLean family. It was at an antiques shop in Bangkok, during a business trip more than forty years ago, that Barry MacLean purchased this unusually shaped blackware vessel that sparked a collecting odyssey.

Created these objects of earth, metal and stone from the cultures of Ban Chiang, Dong Son, Cham, Khmer and other civilizations – each with its own distinctive style of pottery, bronze and sculpture. The types of materials used, the evolution of decorative motifs and methods of manufacture were all captivating, but it was always shape and form combined with the patina of age that drew the MacLeans to particular objects.

The ambition behind the MacLean Collection has been to seek the best and most unique examples that can be displayed and investigated, thus ultimately contributing to the knowledge of students, scholars and connoisseurs. The values of continued learning and the pursuit of knowledge were values given to the MacLean family by their parents and is passed on to their children and grandchildren. That seeking of “knowledge for knowledge’s sake” continues through this collection. This exhibition of the MacLean Collection outside of its home on the north shore of Chicago is intended to help students of all ages learn more about the beauty and development processes of these designed objects. The MacLean Collection is intended to help future students and scholars learn about the extraordinarily skilled people that lived in Southeast Asia over the past four thousand years. This two-tiered jar rests on a raised unadorned footring while the rest of the vessel is covered in animated curvilinear forms that were incised and impressed before firing. Located in today’s northeastern Thailand, the Ban Chiang cultural tradition is best known for the unique painted and unpainted earthenware dating from the third millennium BCE to the third century CE. Earthenware with painted rather than incised geometric and curvilinear decorations date to the late Ban Chiang culture. This vessel has a wide flaring mouth and robust full body. Its appealing designs incorporate interlocking long triangles, net patterns and a pattern of elongated S-shapes with ballooning ends. Ban Chiang pottery vessels primarily functioned as burial objects. Bronze bells worn by animals were made in a wide range of shapes and sizes throughout Southeast Asia. Instead of clappers, round bronze pellets were put inside to make sounds specific to the domesticated animal wearing them. This animal bell is covered in the compressed cord design found on the large anklets over which are two opposing elongated heads and horns of a water buffalo. These massive bronze cuff anklets weigh more than 24 pounds each. Found in Battambang, Cambodia. The decoration is of cord spirals in an S-configuration. The S-configuration is a popular motif found on bronze bells and pottery jars in the early cultures of today’s Thailand and Cambodia. This Buddha triad altarpiece was cast with three images of Buddha each seated in the lotus position with hands in mediation and earth-touching gestures. The setting of stepped pedestal supported by nine lions and arches ending in snake head terminals and temple pilasters holding up the tri-lobed niche represent the architectural style favored by Khmer rulers. The trinity is encircled by an aureole of stylized flames, surmounted by leafy branches of the Bo tree rising to a peak, an icon symbolizing Buddha’s enlightenment. The slender body of this standing crowned and jeweled Buddha helps date it to the late twelfth-century. The Buddha and body halo (mandorla) supported on the backs of two mythical water creatures (makura) were cast separately and joined together by pins in the back of the halo. The smiling Buddha stands with both hands in protection and reassurance gestures (abhaya mudra). This bronze finial originally surmounted a Khmer battle standard. The Hindu god Vishnu stands atop the mythical divine half bird half human deity Garuda. Garuda, a remover of obstacles in religious attainment, is shown standing with one foot forward, arms and wings raised in an animated pose ready for battle. Vishnu stands with four arms holding his attributes of a wheel of law (chakra), a mace, and a conch shell. His lower proper right hand shows the gift-bestowing gesture. He too stands with his left leg forward in a pose ready to spring into action. This elephant bell, has a shape characteristic of the Khmer period, centered in today’s Cambodia. This bell has a large bronze pellet inside that rolls over the four fancy curvilinear striking plates along the bottom of the bell. The two prominent flanges help push the bell out while the elephant walks preventing it from getting caught and abrading the thick folds of skin on the elephant’s neck. 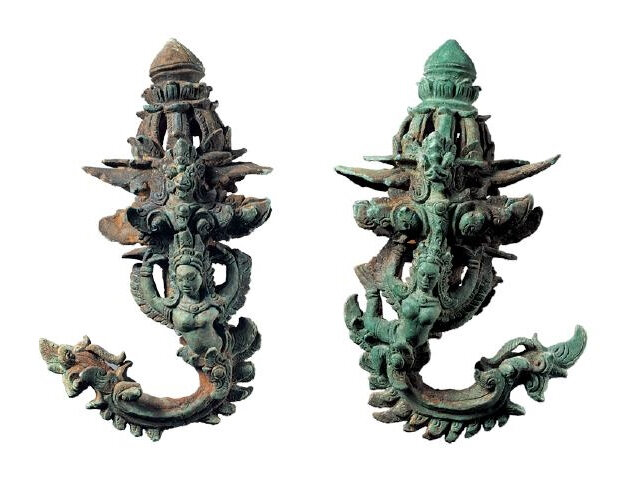 These bronze hooks served the functional and decorative needs of the Khmer court during the twelfth and thirteenth centuries as fittings for palanquin and chariots. Originally a wooden shaft would have suspended the hook and held garlands and decorative textiles. Densely packed with imagery, each hook shows a crowned and winged heavenly being on either side flying above a protective snake (naga). The heavenly beings hold up the torsos and heads of a part human and part bird deity (Garuda), on one side and a lion (singha), on the other. Supported on the shoulders of the Garuda and singha is a lotus shaped roof of a Buddhist shrine. During the millennium from the first to the tenth century, Chinese influence continuously expanded and contracted into northern Vietnam. Immediately following the period known as the Han-Viet, when bronze was used for ritual vessels, pottery examples based on the shapes of bronze counterparts were produced. Here the elongated sloping foot, the slightly compressed body and thicker neck with a wider mouth are based on Chinese shapes but are ultimately uniquely Vietnamese in style. This stoneware Hu vessel also follows the use of Chinese materials and technologies, such as stoneware and ash glaze techniques. Cast in the second century in northern Vietnam, this Hu demonstrates the Han-Viet characteristics of adaption from a Chinese bronze wine container called a Hu. The body proportions differ from Chinese counterparts with an elongated sloping foot, the slightly compressed body, the thicker neck with a wider mouth and its attached lid. The double dragon-head handle with chain attachments and stacked ring decorations are also a variation found on Chinese Hu of the Han dynasty (206 BCE–220 CE).

NDB: According to Philippe Truong, this Hu is from Hán-Viêt period. Bronze vessels made during the Dong Son period were cast in the same single-pour lost-wax processes used in making drums. This covered situla represents a hybrid form of Chinese bronze zun shaped vessel featuring a tall cylindrical body, two taotie mask handles, and three bear legs. Chinese bronzes of this type are half the height and have no lid. The relief decorations are also unique to Dong Son bronze vessels. The three registers of decoration, are divided by two wide, double-ring bands. From top to bottom, the decorations are interlocking lozenges, boats with festooned shamen, animals, fish, and a procession of animals. The domed lid is decorated with a quatre-foil motif in the center where the ring handle is attached with alternating lozenges and concentric saw-tooth patterned rings.

NDB: According to Philippe Truong, this situla is from Hán-Viêt period with Đông Sơn patterns. Bronze drums are the most characteristically representative artifacts of the Dong Son culture. They are believed to have represented symbols of legitimacy and authority presented to regional political entities. Cast using a unique single-pour, lost-wax process, this drum carries the decorative motifs typical of Dong Son drums, such as multi-pointed sunbursts in the center of the tympanum. This drum has an eight-pointed example in the center of the tympanum, surrounded by alternating bands of saw tooth patterns, birds, and beaded designs. In addition, the side of the drum has boats carrying shamen wearing spectacular feather headdresses. This wooden Buddha, covered by a matt-finished lacquer, is seated on a flat throne in the lotus position. His right hand reaches downward, palm inward and touches or reaches toward the earth in the earth-touching gesture (Bhumisparsa mudra). This gesture depicts the moment of enlightenment and the Buddha’s victory over the deity of death (Mara). This form of the Buddha has long been widely venerated in the Myanmar region.

This exhibition is in conjunction with the exhibition "Southeast Asian Ceramics: Selections from the Collection of James E. Breece III." A two-part catalog was produced for these two exhibitions.