An emerald bead and diamond bracelet

An emerald bead and diamond bracelet 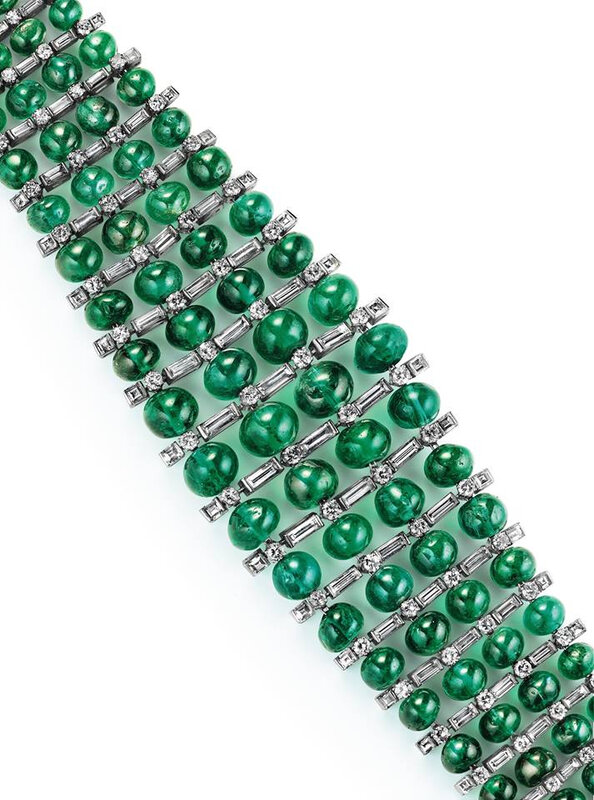 Note: Maharani Sita Devi of Baroda (1917-1989) had a passion for natural pearls, emeralds, rubies and diamonds. Her many commissions at Cartier or Van Cleef & Arpels show her love for spectacular jewelry. After her wedding to the Maharaja Pratapsingh Gaekwar of Baroda, she received jewels from the Baroda treasury to add to her collection. These gemstones and jewels dated back to the Mughal era. These included a magnificent seven-strand natural pearl necklace and a superb three-row diamond necklace that suspended the Star of the South diamond of 128.80 carats and the English Dresden of 78.53 carats.

The Maharani led a lavish lifestyle, even after her husband was deposed by the Indian Government in 1951. She and her beloved son, Sayajirao Gaekwar nicknamed ‘Princie’, continued to attend high-society events together for many years.

Her strong personality was only matched by a poised elegance and her very impressive collection of jewels contributed to her glamorous lifestyle. Legend has it that she would come to Paris and stay at the famous Ritz Hôtel, right on Place Vendôme, and that she would be seen crossing the square to go to Van Cleef & Arpels, followed by some of her aids, carrying bags of gems to be remounted by the French house.

During the 1950s, she developed a reputation for living an extravagant lifestyle in Paris. The Maharani had many of her traditional Indian jewels reset to fit the latest Western trends, most of which was handled by the workshops of Van Cleef & Arpels. Originally derived from the Baroda treasury and although unsigned, it is likely that the emerald bracelet, Lot 109, was designed by Van Cleef & Arpels. This bracelet was worn to complement a spectacular emerald necklace and a pair of earrings by Van Cleef & Arpels that she also commissioned.

Lot 110, a grey pearl and diamond bracelet, was commissioned by the Maharani from Cartier in 1953. It was one of her favorites and she paired the bracelet often with her three-row natural pearl necklace. Both bracelets, along with 46 other pieces from her collection, were sold by the Crédit Municipal de Monaco on 16 November 1974 in order to pay off the Maharani's debts.