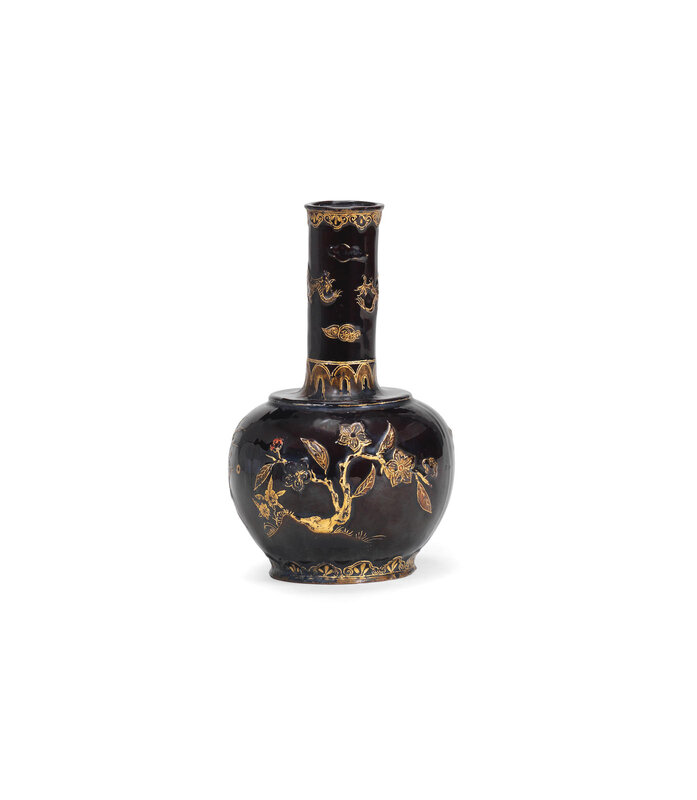 After a Chinese Yixing stoneware original, the globular body with a quilin head spout and tall cylindrical neck with flared rim, decorated in the workshop of Martin Schnell, Dresden, in imitation of lacquer with a black glaze, the body moulded with flowering plants issuing from rockwork cold-painted in gilding heightened in pale-brown and red, the spout embellished in gilding, the neck with two dragons flanking a flaming pearl above clouds and border of lappet panels, the rim with a moulded lappet border embellished in gilding (some wear to gilding and enamels overall, cover lacking).

Note: The 1719 inventories of the Dresden and Leipzig warehouses, Böttger's rooms and the stock room in Meissen, list several black-lacquered examples of this shape in the Dresden warehouse (Claus Boltz, Steinzeug und Porzellan der Böttgerperiode, in Keramos 167/168 (2000), p. 129).

According to the delivery specification of 15 March 1733 of porcelain and stoneware from the Dresden and Leipzig warehouses (the so-called 'Böttgerische Credit Wesen', ie. the administration of Böttger's bankrupt estate), the four kendis (including the present lot) decorated in imitation of lacquer that were subsequently listed in the Japanese Palace inventories under no. 64 were delivered from the Leipzig warehouse (the delivery specification of 1733 refers to '4 St.Thee Boy Kannen'(published by Claus Boltz, Japanisches Palais-Inventar 1770 und Turmzimmer-Inventar 1769, in Keramos 153 (1996), p. 114)).

Eight black-glazed kendis were listed in the Japanese Palace inventory of 1721 under nos. 35-37; none remain in Dresden and their whereabouts is uncertain, though they could include the two examples with covers now in the Stiftung Schloss Friedenstein, Gotha (M. Eberle, Das rote Gold (n.d.), no. 16), and in the Grassi Museum, Leipzig (D. Gielke, Meissener Porzellan des 18. und 19. Jahrhunderts (2003), no. 9), and the example without a cover in Serves Cité de la céramique (MNC 2244/8, purchased in Dresden in 1836 by Alexandre Brongniart).

Of the four delivered in 1733 and listed under no. 64, two (including the present lot) were sold from the Dresden collection in 1920 and were subsequently in the collection of Siegfried Salz, Berlin.

Two others with covers had been sold from the Dresden collections in 1919 with no mention of the Japanese Palace inventory number, so it is not certain whether they were among the eight kendis listed in the inventory under nos. 35-37, or the two others delivered in 1733 and listed under no. 64 (Lepke's, 7-8 October 1919, lots 54 and 55).

One is in the Gardiner Museum, Toronto (inv. no. G83.1.573), another in the Los Angeles County Museum (inv. no. 87.5.1, formerly in the Nyffeler Collection). A third is in a New York private collection.