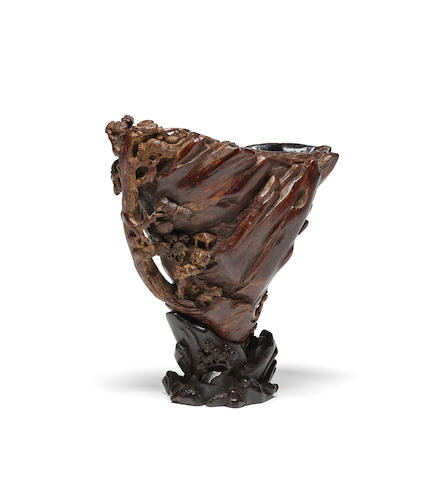 Made to resemble a rhinoceros horn libation cup, the sides carved in high relief with a mountainous landscape peppered with travelers, pavilions and trees, a large undercut pine tree at one end forming the handle, with two figures in a raft at the base, incised with characters reading Chen Yang Weizhan gong zhi (respectfully made by minister Yang Weizhan), the rich dark wood with a shiny patina on the raised areas, the interior lacquered black, wood stand.

Note: Yang Weizhan was an ivory carver, originally from Guangdong who worked for the Imperial court. Extant Imperial records record him as having carved a pair of ivory lamps in 1744. While working for the court he also carved in chenxiangmu. A chenxiangmu carving of the 'Nine Elders of Fragrant Mountain' in the collection of the National Palace Museum, Taipei, is illustrated in James C.Y. Watt, Possessing the Past, Treasures from the National Palace Museum, Taipei, New York and Taipei, 1996, p. 528, pl. 325.