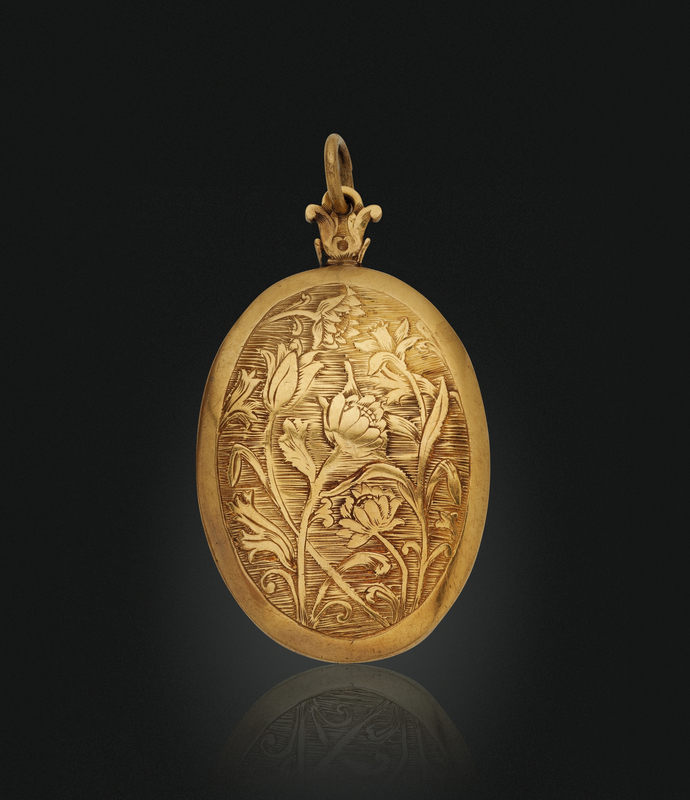 Set in a gold pendant mount, the reverse engraved with flowers.

Note: This rare, carved agate depiction of Jahangir finds comparison with a small group of Mughal cameos all bearing an image of Shah Jahan, produced by European or Indian lapidaries working at the Mughal court. These include a sardonyx cameo of Shah Jahan by a European craftsman at the Mughal court, circa 1630-40, in the Victoria and Albert Museum, London, inv. IS.14-1974. A sardonyx cameo with enamelled gold mount, attributed to Kan Atamm (‘the Supreme Engraver’), circa 1630-40, illustrating the famous incident of a young Shah Jahan as Prince Khurram slaying a lion, is now in the Bibliothèque Nationale de France, Paris, inv. Camee.366 (Paris, 2017, p.29). An agate cameo portrait with a ruby surround is in the Al-Sabah Collection, Kuwait (inv.no. LNS 43 J; Keene and Kaoukji, 2001, no.9.11, p.114). Another sardonyx cameo, quite similar to the example in the Victoria and Albert Museum, sold at Bonhams, London, 1 May 2003, lot 380.

Amina Okada suggests that the ‘relatively dry and angular’ treatment of Jahangir’s face indicates that this is the work of a European lapidary probably working in France or Italy. It is quite likely that the cameo was carved after an engraving or portrait of the Mughal emperor (Paris, 2017, p.30).

For a gold-mounted agate bazuband in the sale, see lot 288.