'Buried by Vesuvius: Treasures from the Villa dei Papiri' at the Getty Villa

'Buried by Vesuvius: Treasures from the Villa dei Papiri' at the Getty Villa

LOS ANGELES – The Getty Villa is modeled on the Villa dei Papiri at Herculaneum, an ancient Roman villa buried by the eruption of Mount Vesuvius in AD 79. Rediscovered in the 1750s and explored further in the 1990s and early 2000s, the Villa dei Papiri has yielded spectacular colored marble and mosaic floors, frescoed walls, a large collection of bronze and marble statuary, and a unique library of more than a thousand papyrus scrolls (from which it gets its name). On view June 26 to October 28, 2019, Buried by Vesuvius: Treasures from the Villa dei Papiri presents many of the most significant artifacts discovered in the 1750s, along with recent finds from the still active archeological site, and explores ongoing efforts to open and read the badly damaged papyri.

“The Villa dei Papiri is one of the most luxurious private residences of the ancient classical world ever discovered and one which had an important role in the early history of archeology. Especially important are its unique collection of ancient bronze statuary and antiquity’s only surviving library of papyrus scrolls, which provide an unprecedented insight into the philosophical interests of its aristocratic Roman occupant – none other than the father-in-law of Julius Caesar,” says Timothy Potts, director of the J. Paul Getty Museum. “Among the most impressive of these finds is a rare bronze sculpture of a drunken satyr, which, as part of a collaborative conservation project with the Museo Archeologico Nazionale di Napoli (MANN), is undergoing analysis and conservation treatment in our conservation studios before going on display in the exhibition.” Potts adds, “For several decades, we have worked closely with Italian colleagues and institutions in conserving, protecting, researching and celebrating Italy’s extraordinary cultural heritage. We are delighted now to be collaborating with MANN, the Parco Archeologico di Ercolano (PA-Erco), and the Biblioteca Nazionale “Vittorio Emanuele” di Napoli (BNN) in organizing this exhibition. We have had several successful collaborative conservation projects with MANN over the past few years including, most recently, their monumental funerary vessel (krater) from Altamura in 2018, and three of their splendid bronzes: the Ephebe (Youth) in 2009, the Apollo Saettante in 2011, and the over-life-size sculpture of Tiberius in 2013.”

The Villa dei Papiri was a sumptuous private residence on the Bay of Naples, just outside the Roman town of Herculaneum. Deeply buried by the eruption of Mount Vesuvius in AD 79, it was rediscovered in 1750 when well-diggers struck a spectacular circular multicolored marble floor that belonged to the luxurious Roman villa (a full-scale replica of this floor decorates the Getty Villa’s Temple of Hercules gallery). Under the sponsorship of King Charles VII, Karl Weber, a Swiss military engineer in the royal guard, was entrusted with excavating the site. Weber directed a crew of conscripts and convicts to dig a series of shafts and tunnels to seek and remove the most impressive finds to augment the collections of the recently established Royal Herculanean Museum. Although his superiors were chiefly interested in recovering artifacts to enhance the royal collections, Weber carefully recorded their findspots and architectural contexts. Weber’s excavation plan of the Villa dei Papiri, on display in the exhibition, provides detailed evidence for the layout and decoration of the building, including discovery dates and locations of sculptures, frescos, papyri, columns, pools, fountains, gutters, hinges, and other architectural features. In the early 1970s, when J. Paul Getty decided to replicate the Villa dei Papiri for his museum in Malibu, his architects relied on Karl Weber’s eighteenth-century plan, since the original building remained inaccessible underground. They also employed elements from other ancient structures discovered around the Bay of Naples.

“It is only fitting that the first major exhibition on the Villa dei Papiri takes place at the Getty Villa, which is a recreation of the famous villa in Herculaneum,” says Kenneth Lapatin, curator of antiquities at the J. Paul Getty Museum. “Recreating the Villa dei Papiri appealed to Mr. Getty because of its association with Julius Caesar through his father-in-law, Lucius Calpurnius Piso Caesoninus, the villa’s supposed owner. Getty often compared himself to ancient Roman rulers and particularly admired Julius Caesar and the emperor Hadrian, a fellow art collector and villa owner. Although Getty, unlike Hadrian, did not live in his villa, his reconstruction was a key component in his attempts to refashion himself from a Midwestern businessman into a European aristocrat.” One of the most significant finds recovered in the 1750s was a first-century bronze statue of a Drunken Satyr in dynamic motion. The middle-aged figure was praised by the eighteenth-century German scholar J. J. Winckelmann as one of the most beautiful bronze statues to survive from antiquity. The satyr, a mythical follower of the wine god Bacchus, wears a pine wreath with flower clusters and has pointed ears, small horns, wild hair, and wattles. He snaps his right thumb and middle finger in a gesture associated by ancient authors with Bacchic abandon. A replica of the satyr can be found in the Getty Villa’s Outer Peristyle pool.

The ancient Drunken Satyr, which is usually on view in Naples, arrived to the Getty early in October 2018 for conservation treatment and analysis as part of a collaborative project with MANN. The project aims to identify past interventions—what was done to the statue in both ancient and early modern times to repair it, stabilize it, or change its appearance. There will also be an investigation of any potential instabilities, including metal corrosion and the connection between the statue’s various parts, as well as their connections to its early modern stone base. In collaboration with their colleagues at MANN, Getty conservators will also evaluate possible aesthetic issues, considering how to best display the sculpture to enhance viewers’ appreciation of its artistry. How the statue was originally manufactured will also be explored through techniques such as X-radiography, endoscopy, technical imaging, and non-invasive analytical methods. Another important discovery was the cache of approximately 1,100 papyrus scrolls recovered from the ancient villa in 1752-54, which constitute the only surviving library from the classical world. Camillo Paderni (about 1715–1781), the first director of the royal museum in Portici, was the first to attempt to open the carbonized scrolls by slicing the scrolls lengthwise, cutting through their charred outer “bark” to expose the writing. The texts were copied for study and eventual publication, and then the papyri were scraped to reveal additional layers. In 1753, Father Antonio Piaggio, a curator of manuscripts at the Vatican, devised a more successful system, inventing and refining a series of unrolling machines, one of which is on view in the exhibition.

In the late 1900s and early 2000s, advanced imaging technologies enhanced the legibility of the previously opened papyri. Today, they offer the prospect of digital unrolling and decipherment of the hundreds that remain closed. An in-gallery video addressing recent attempts to virtually open and read the scrolls will also be part of the exhibition. In addition, a group of papyrus scrolls on loan from Bibiloteca Nazionale “Vittorio Emanuele” in Naples, which will be on display for the first time in the US, will undergo a major research project at UCLA of imaging and virtual unscrolling prior to being placed in the exhibition. The results of the project will be available later in the summer after the exhibition opens. Most of the texts opened to date are Greek philosophical treatises, particularly by Philodemus of Gadara (about 110–30 BC), a follower of Epicurus. The Athenian philosopher Epicurus (341–270 BC) founded a popular school called the Garden, which recognized pleasure as the greatest good. Images of Greek intellectuals, including busts of Epicurus, and other artifacts, such as a bronze piglet and a portable sundial, recovered from the Villa dei Papiri, further reflects the owner’s interest in Epicurean philosophy and rhetoric.

The rooms and gardens of the Villa dei Papiri were enlivened by approximately 90 sculptures in bronze and marble depicting mythological figures, athletes, rulers, statesmen, poets, and philosophers. Portraits of eminent figures of the Hellenistic period (323–31 BC) predominate, which reflects the particular interests of the villa’s owners in Hellenistic philosophy and politics. The arrangement of the sculptures also appears to have been programmatic, presenting particular groupings that invited viewers to compare the accomplishments and failings of the subjects as well as the artistic styles of the works.

For wealthy Romans, otium, or leisure, presented a chance to forget the concerns of urban life, abandon worry about politics or business (negotium). A seaside estate such as the Villa dei Papiri was the perfect place for an escape. Its owners could host elaborate banquets where guests were surrounded by art, sating both their gastronomic and aesthetic appetites. Gardens, baths, and athletic spaces, as well as long walkways for undistracted contemplation, invited visitors to pause and discuss the representations of mythological figures, men of letters, and famous statesmen. The exhibition will include many of these ancient bronze and marble representations, not far from their replicas on display throughout the Getty Villa’s gardens, including two famous figures of bronze runners.

Exploration of the Villa dei Papiri was abandoned in 1764 and remained entirely buried for more than two centuries until new excavations were undertaken in the 1990s and 2000s. Renewed interested brought to light a portion of the building’s atrium as well as lower levels that were unknown in the eighteenth century. 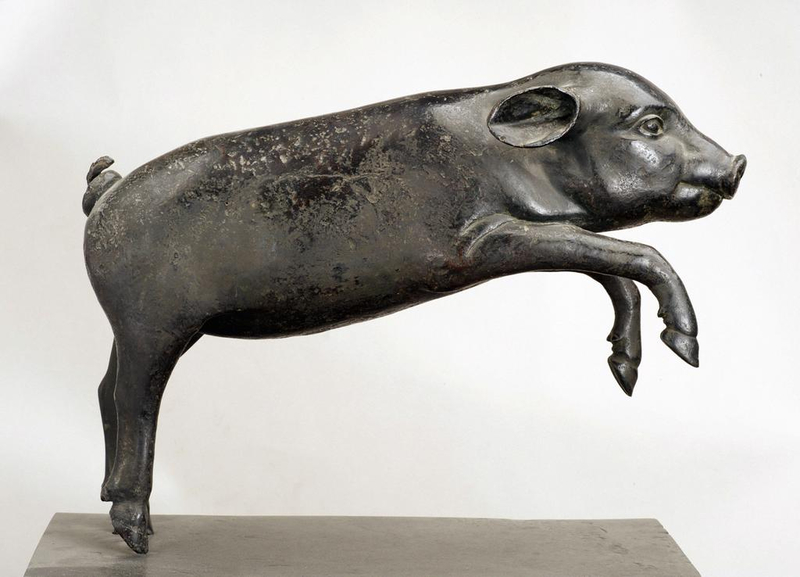 Among the new discoveries were rooms with colorful mosaic floors and spectacular frescoed walls and stuccoed ceilings. Finds also included a seaside pavilion and swimming pool, where archaeologists recovered two marble sculptures and luxurious wood and ivory furniture components, on view here for the first time. These recent excavations helped clarify the chronology of the villa, which is now thought to have been built around 40 BC, with the seaside pavilion added around AD 20. Ongoing research continues to advance our understanding of the initial finds from the site.

Buried by Vesuvius: Treasures from the Villa dei Papiri is curated by Kenneth Lapatin, curator of antiquities at the J. Paul Getty Museum. The exhibition was organized in collaboration with the Museo Archeologico Nazionale di Napoli, Parco Archeologico di Ercolano, and Biblioteca Nazionale di Napoli “Vittorio Emanuele III”, and with the generous participation of the Bodleian Libraries of the University of Oxford, the Metropolitan Museum of Art New York. The exhibition is made possible with major support from Elizabeth and Bruce Dunlevie. It is generously supported by The Spogli Family Foundation. Additional support is provided by the J. Paul Getty Museum’s Villa Council and the Italian Cultural Institute. 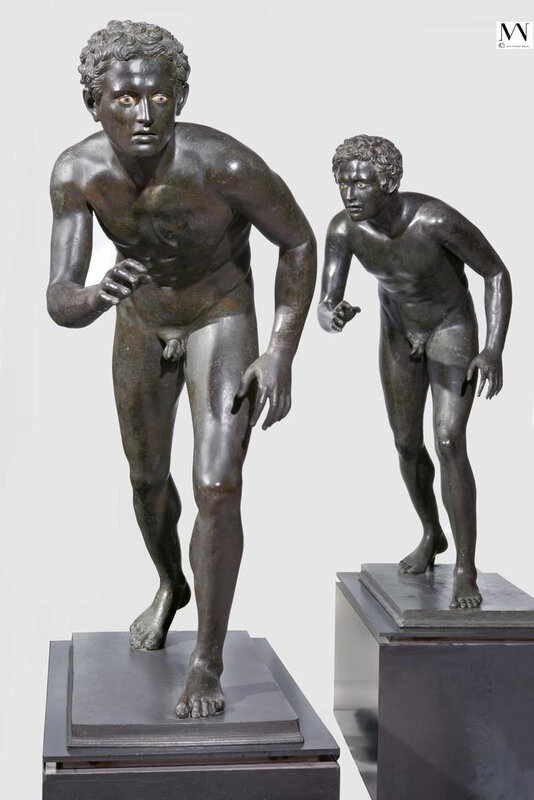 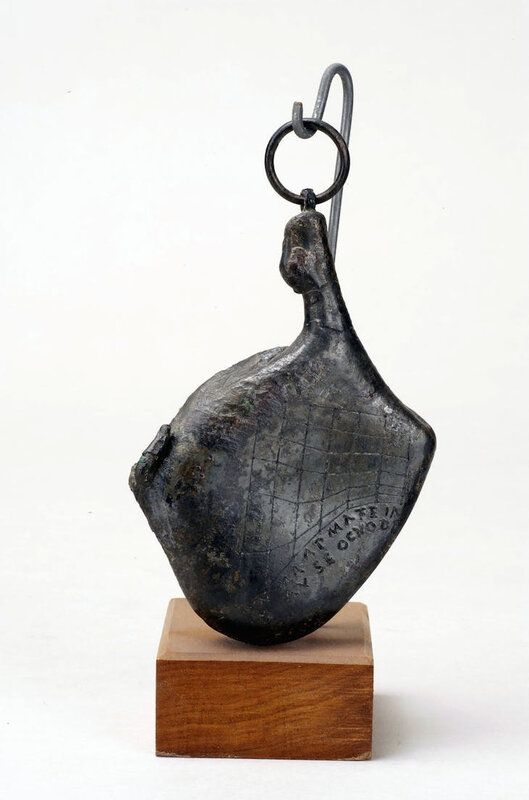 Commentaires sur 'Buried by Vesuvius: Treasures from the Villa dei Papiri' at the Getty Villa