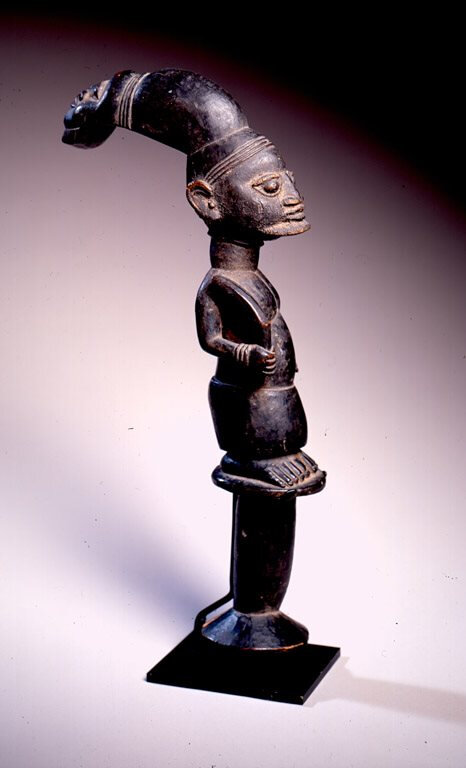 In this dance staff made to honor Èshù, two faces look in opposite directions.
Èshù is a deity honored by the Yoruba people of Nigeria and known throughout the African Diaspora as Elegua or Elegba.
Èshù mediates opposing forces to bring together different worlds. He bears messages from the ancestral and spiritual realms, opens doors, and guards crossroads.
Shrines to Èshù are placed wherever there is potential for conflict. Though known as a mischief-maker and agent provocateur, Èshù ultimately works to promote order and harmony in the universe.
Èshù teaches wisdom, reminding people to look at the world from more than one point of view. The kneeling gift bearer is common on many altars because of its capacity to serve as a surrogate for the owner of an altar or the person who commissioned it.

This example is unusual for its elongated form. Its kneeling pose communicates respect, courtesy, and supplication.

When placed on an altar that represents the “outer head” of a Yoruba deity, the receptacles of kneeling figures such as this one are used to conceal natural objects signifying the “inner head” of a that deity. 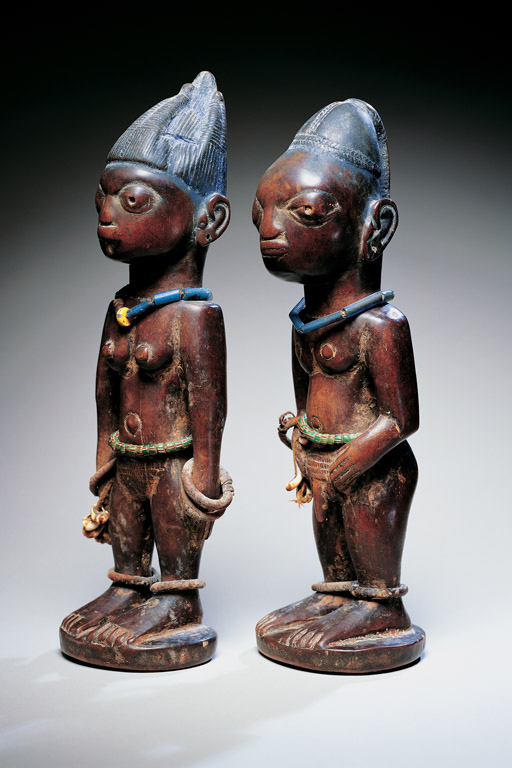 Twins are more common in Yoruba communities than anywhere else in the world. Ère ìbejì figures such as these represent deceased twin children. When a twin dies, a figure is carved to localize the spirit of the deceased. If neglected, its spirit might feel abandoned and invite the soul of the surviving twin to join it in the beyond. The smooth, worn surfaces of these figures show that they have been cared for devotedly. Their elaborate ceremonial coiffures are rubbed with a powdered dye called Rickett’s blueing, which was used by the British to whiten laundry during the colonial era. Yoruba artists used the powder as a substitute for indigo. 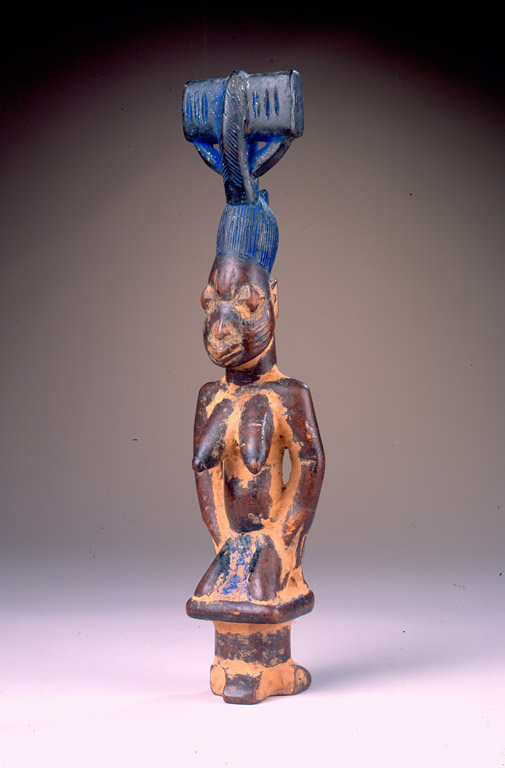 The kneeling female figure depicted on this dance staff represents a priestess or devotee of Shango.

Shango is symbolized by the double-axe-blade motif, which refers to thunderstorms (Neolithic axe-heads are described as having being thrown down from the sky by the thunder deity). 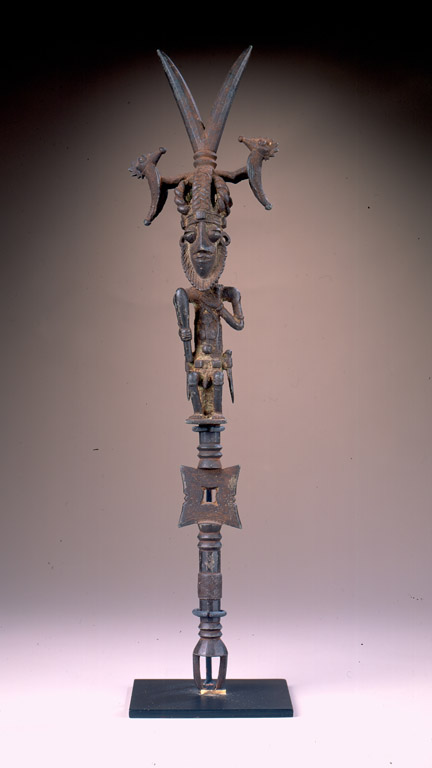 Designed for ceremonial use, this staff (òpá Ògún) distinguishes an individual as a senior blacksmith and possibly a renowned hunter and warrior who has been honored by the king with a chieftaincy title.

The bird motifs and projections on the figure’s headgear signify an ability to wield enormous physical and metaphysical powers due to close association with Ògún, the Yoruba god of iron. 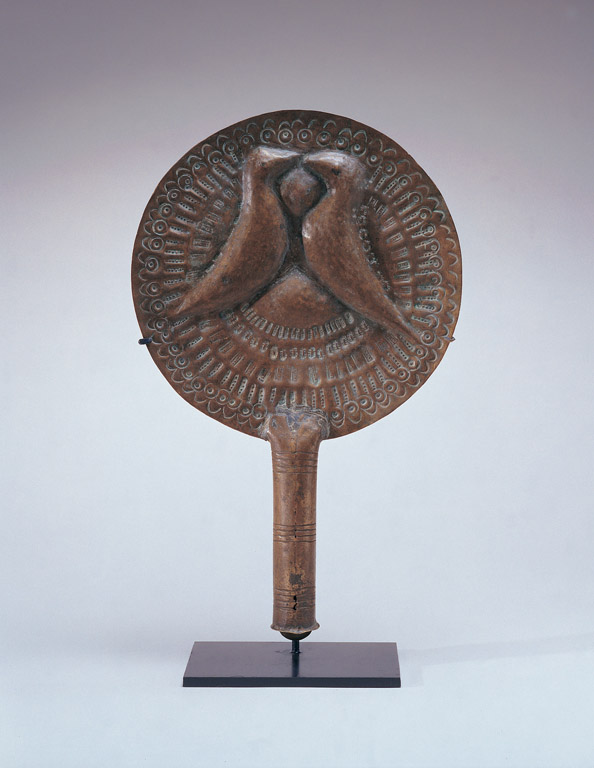 This elegant brass fan was created to honor Osun, the Yoruba goddess of beauty and fertility. Priestesses of Osun carry brass fans in processions along the banks of the Osun River during annual festivals dedicated to the deity.

Osun relieves human anxiety in the same way that a fan cools the body. According to Yoruba oral tradition, Osun was excluded from the all-male council of gods. Consequently, their sacrifices were rejected at the door to paradise until Osun gave birth to Èshù, who served as mediator between this world and beyond, allowing order and prosperity to reign. 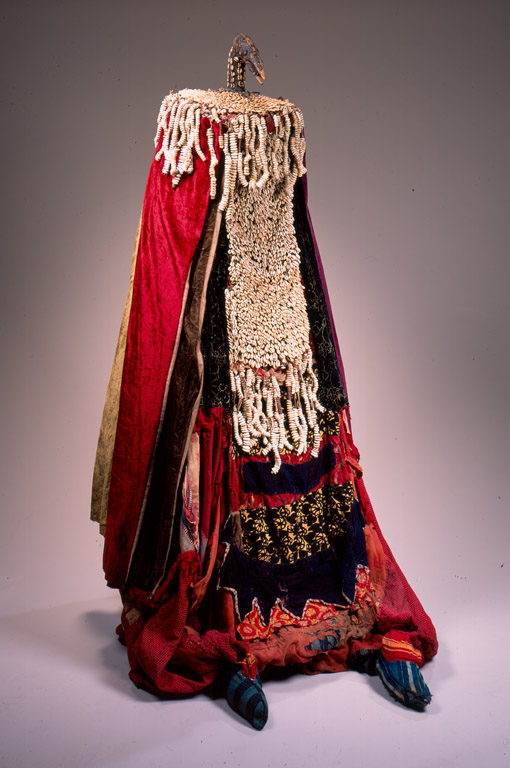 In Yoruba communities ancestors are described as “beings from beyond,” aptly personified by otherworldly Egúngún masks such as this one.
These masks are worn at annual street festivals held in honor of the ancestors of a city’s founding lineages. This masquerade’s outer layers are made from imported velvets and factory manufactured cloth, while the inner layers are made of local handspun, hand-woven, indigo dyed cotton cloth.
An abundance of cowrie shells adorn the front of the mask and cascade in multiple strands both above and below. It is capped by a carved wooden bird’s head, which projects from a circular platform densely embedded with additional shells. 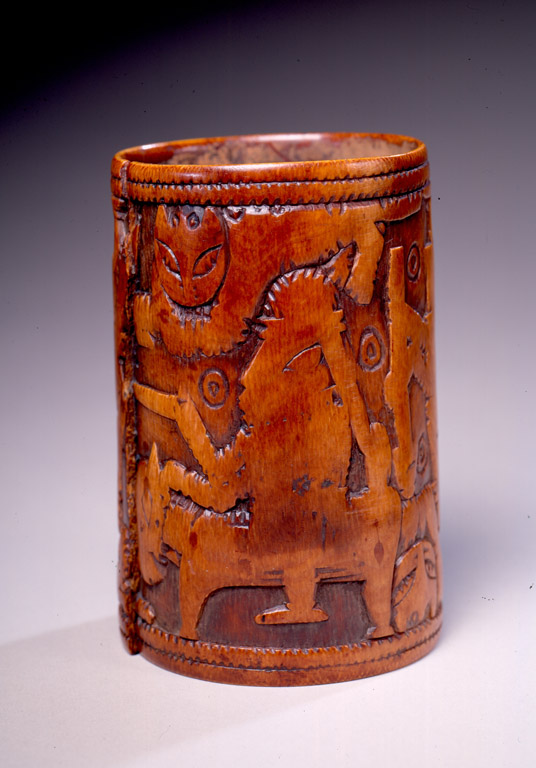 This ivory bracelet from the 800-year-old Edo Kingdom of Benin is decorated with motifs that refer to the great sixteenth-century warrior king Oba Esigie.

Motifs associated with Esigie were popular during the reign of the late-nineteenth-century king Oba Ovoranmwen.

The motifs include a Portuguese soldier on horseback and an image of the king himself, depicted in the guise of a leopard. The bracelet’s deep burgundy color is the result of repeated applications of red palm oil mixed with spirits. 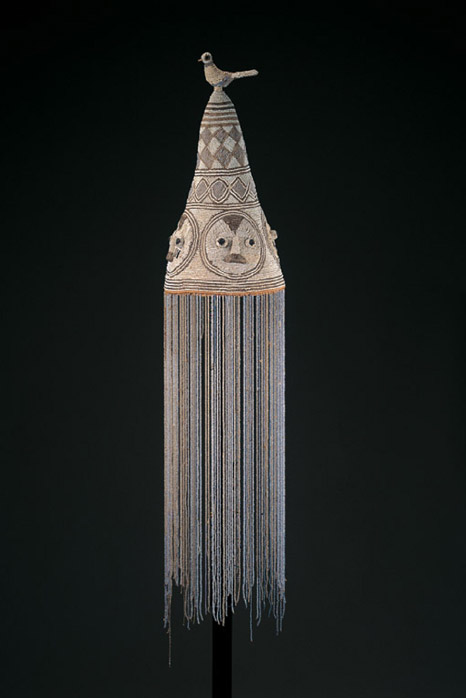 A Yoruba king (oba) is identified in public by a conical, beaded crown (adé) with a veil that transforms him into a living embodiment of Odùduwà, regarded as the first king of the Yoruba people. The bird at the top of the crown recalls the Yoruba creation narrative, which describes how Odùduwà used a bird to create the first land in Ilè Ifè at the beginning of time. The bird identifies the king as a descendant of Odùduwà and emphasizes his role as an intermediary between his subjects and the òrìsà, or gods, in the same way that a bird mediates between heaven and earth.