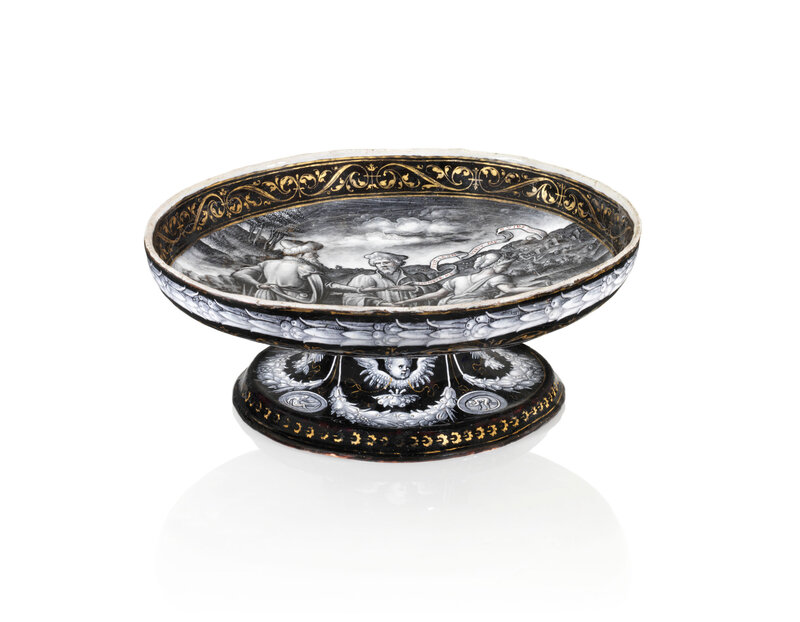 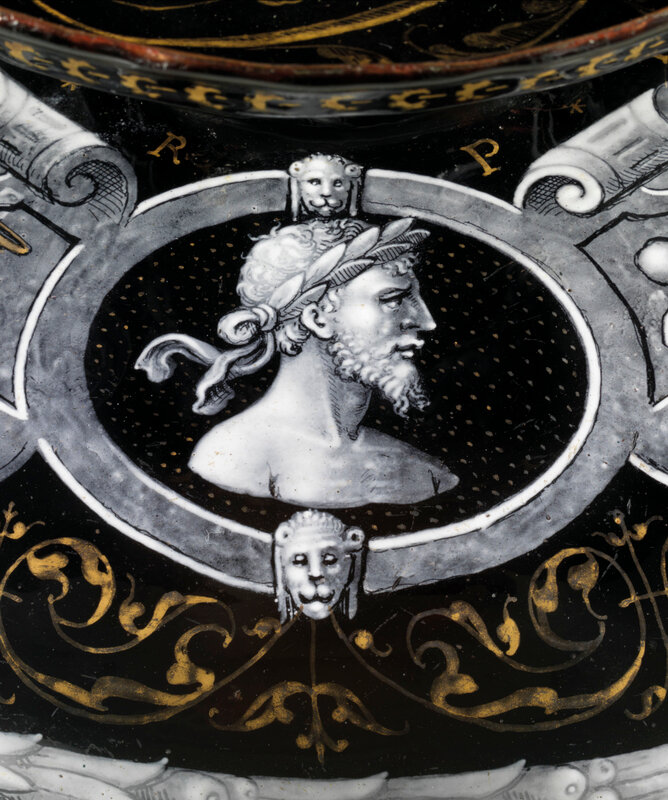 Parcel-gilt grisaille enamel; the interior of the bowl signed 'P.R' and with three figures, one inscribed 'HONEVR' and the other 'VERTV', with a banner inscribed 'HONEVR. ME. SVIT. LA. ON VERTV. ME. GVIDE'; the underside of the bowl signed four times in gilt lettering 'PR'; the foot with coat of arms and motto 'ASSES. TOST. SI. ASSES. BIEN'; the underside of the foot with inserted enamel roundel with a rose surrounded by the inscription 'SICVT. ROSA. INTER. EXPINAS.' and with paper labels inscribed '3112' and 'F G 31/ 11 . 59'.

Note: Pierre Reymond was among the most celebrated exponents of Limoges enamelling. He was patronised by some of the greatest collectors of sixteenth century Europe, including both the Queen of France, Catherine de’ Medici, and Anne de Montmorency, Marshall and Constable of France. Born in 1513 he opened a workshop in the lower section of the enamellers' district in Limoges. His standing in the city was such that he was made consul of Limoges twice, in 1560 and 1567.

The subject and symbolism of the tazza are intriguing although they have yet to be fully unravelled. The interior of the bowl shows a scene of a female figure representing Virtue, a cornucopia in her right hand, leading a cleric holding a scroll. The cleric, in turn, reaches back to take the hand of a male figure representing Honour. The inscription on the scroll may relate to the poet Louis Bellaud, also known as Bellaud de la Bellaudière (1543–1588), who used the motto 'Virtue me guide, honneur me suit', suggesting Bellaud as a possible inspiration for the scene, via his poetry.

The inscription on the coat-of-arms on the stem of the tazza 'ASSES TOST SI ASSES BIEN' can be translated as 'Soon enough if well enough' and has been attributed to Cato. However, in the present context the motto can also be associated with the Genevan bookseller, poet and financier René de Bienassis, who was active in Geneva from 1545. From 1546 to 1554 Bienassis financed the publication of works by the French theologian and pastor John Calvin, a principal figure in the development of Protestant theology known today as Calvinism. In a publication of Calvin's editions, Bienassis included this motto and it again is used in the frontispiece of the French translation of Erasmus' Paraphrases (Pabel and Vessey, loc. cit.).

Pierre Reymond included the inscription on at least three other works: a ewer showing the drowning of Pharaoh's army in the Red Sea (British Museum, inv. no. 1913,1220.32), a cup and cover (ex-collection Louis Fidel Debruge-Dumenil) and a plate with the inscription within an unfinished coat-of-arms in the Musée d'Art et d'Histoire, Geneva (inv. no. G 941). These works may have been commissioned by the same patron. The possibility that the wealthy Bienassis was this patron has previously been raised by Hans Boecke in discussing the plate in Geneva (Boecke, loc. cit.), an argument reinforced by the knowledge that 'assez bien' is an anagram of Bienassis.

The inclusion in the interior scene of the present tazza of inscriptions identifying the figures is unusual, but also visible on the plate in Geneva, which reinforces the possible connection between the items in the group discussed above. Such inscriptions are also visible on a grisaille oil painting showing the stoning of a Pope by Girlamo da Treviso (Royal Collection, inv. no. 405748) that was in the collection of Henry VIII of England. The subject of this grisaille, which is stylistically very similar to Reymond's enamel, refers to the English Reformation, whereby Henry VIII broke away from the Church of Rome and was established as the head of the Church of England. This raises the possibility that Reymond was working from a series of engravings of anti-papal political allegories, possibly at the behest of the Calvinist René de Bienassis. Certainly the subject of the plate in Geneva, that is believed to represent an allegory of the sanctification of the believer by grace and not by faith, was inspired by the virulent changes in religious thought that were occurring in France between 1555 and 1563.

Whatever the political and religious symbolism surrounding the tazza, the object shows Reymond's skills as an enameller at his very best. The finesse of his grisaille colouring and the quality, particularly of the reclining nude figures in cartouches on the underside of the bowl, are extraordinary and comparable to the finest works in enamel by any maker in the sixteenth century. The figures are outlined by a rigid black contour, typical of Reymond, and an indication that the models were transferred to the surface to be enamelled by way of pricked tracing papers. Such methodology can be seen in a closely comparable covered tazza executed by Reymond for Linhard Turcher of Nuremberg circa 1558 and a pair of covered tazze now in the Walters Art Gallery, Baltimore (P. Verdier, loc. cit.).