Art of Democratic Republic of the Congo at High Museum of Art, Atlanta

Art of Democratic Republic of the Congo at High Museum of Art, Atlanta In Metoko societies, paired male and female figures representing husband and wife were used in initiation rites to confer the status of kasimbi, one of the highest ranks within the association called Bukota, whose membership included both men and women.

The paired figures provided behavioral models, encouraged healing, and promoted peace. The Richmans have made couples—an important subject in African art—a special theme in their collecting. These sculptures represent idealized images of men and women who bear the potential to give birth to future generations. Without children, one does not become an ancestor. In Luba culture, to make or hold an adze signifies royalty and power. This symbolism is derived from oral histories that describe how a mythological hero established kingship by introducing advanced metal-working, forever connecting the two.

As a result, Luba blacksmiths are highly regarded, as in many African cultures. They are respected for their secret knowledge and expert metal-working skills, derived from the founding hero himself.

The tools and products of blacksmiths play significant roles in investiture rituals for Luba kings as well as in many other ceremonies and events. Masks like this performed during initiation rituals of the alunga association, a powerful men’s organization charged with educating teenage boys and maintaining law and order. As the young men learned the mysteries of the mask through songs, the mask instructed them, “alunga is not a man, but a thing, something from the bush, something from very remote times, something very awe-inspiring. Never profane its mysteries.” This mask has two pairs of eyes, each painted white to indicate spiritual insight. Alunga associations were banned by the Belgian government in 1947 because their authority represented a challenge to colonial rule. Among the Lwalwa people of the southern region of the Democratic Republic of the Congo and neighboring Angola, initiation masks like this one are carved by politically powerful men who are also in charge of staging masquerade performances. Lwalwa masks present an ingenious distillation of forms. At the end of the fifteenth century, Christianity was introduced to the Kingdom of the Kongo, along the coast of central Africa.
This influenced religious and artistic practices. Kongo artists created crosses and other objects of worship, combining their Kongolese and Christian iconography.

Here, Christ’s face is given African features. Crosses were not only used in Christian liturgy but also served additional diverse functions, in healing, in divination, as symbols of social status and political authority, and as hunting charms. Made of knotted raffia or pineapple-leaf fiber, hats such as this one were worn by political leaders throughout the region of the former Kingdom of the Kongo (founded ca. 1400), which flourished along the coastal region of central Africa. The finely detailed geometric patterns of this hat resemble those woven into the beautiful velvet-like raffia textiles worn by Kongo royalty and formerly used as currency throughout the kingdom. The geometric patterns of Kongo hats, textiles, and mats were associated with the maze-like layout of the royal palace and streets of the capital. This fly whisk was used as an emblem of political office. Its smooth, worn surfaces show signs of extensive use.

Delicate metalwork ornaments the figure’s face, repeating the same sign at the center of her forehead and at both temples. These four points mark the Dikenga, the Kongo cosmogram that charts the never-ending cycle of life. 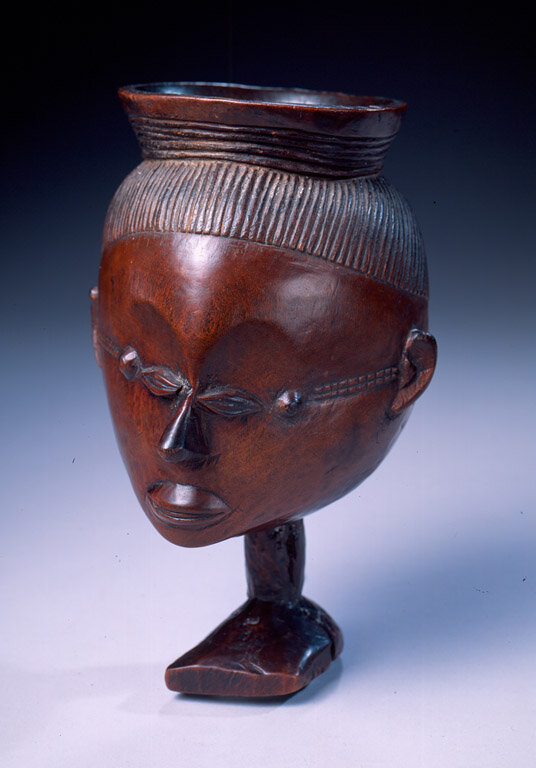 A heart-shaped face animates this cup. The face tilts slightly to one side, giving the sculpture a subtly asymmetrical expression. Its central support balances on one foot. This neck rest, once used to support the head while resting or sleeping, was carved by an artist known to African art collectors as the Master of Beneki.

Much of his work shares signature stylistic features, especially extravagantly large feet. In Songye art as well as in the art of the neighboring Luba, Kuba, and Shilele, prominent feet symbolize power. The motif refers to the confiscation of territory in warfare. This neck rest is supported by two back-to-back figures, both with huge feet. During divination sessions, a diviner and client held this sculpture and inserted their fingers into its opening. As the sculpture was moved across the diviner’s woven mat, it produced the sound “shekesheke,” giving this divination tool its name, kashekesheke.

Through this process problems were solved, memories reconstructed, and reasons for histories of misfortune revealed. Kashekesheke is one of the oldest of all Luba divination techniques. This intricately detailed anthropomorphic vessel was made as a prestigious gift. Its elegant form depicts the aristocratic hairstyle worn by royal men and women of the Mangbetu kingdom in central Africa at the turn of the century. By the early 1920s the Belgian Queen Elizabeth visited central Africa and photographed a woman of the Mangbetu court; her portrait was then circulated on the Belgian stamp and images of royal Mangbetu women proliferated throughout the 1920s and 1930s. The image became an important icon for Harlem Renaissance artists, inspiring Aaron Douglas’s cover image for Opportunity magazine and many other works. The white paint on the face of this mask identifies it as a representative of ancestral and spiritual realms. In Kwese society, sacred masks kept in small communal shrines perform at initiation ceremonies and on other occasions to promote social well-being, health, and abundance.
This mask’s costume would have included a large, full collar of raffia fiber. Kwese masks are so similar to those of their neighbors the Yaka, the Suku, and the Pende that they are often misattributed.
This mask’s red, blue, and white polychrome and its vertical crest distinguish it as Kwese. 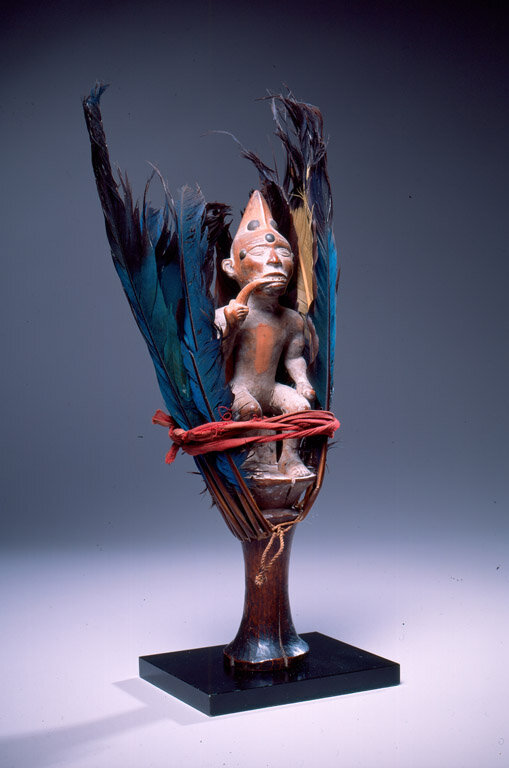 The figure seated at the center of this royal scepter is painted white to show that its authority derives from ancestral and spiritual realms. The stroke of earth-red paint on its torso symbolizes life’s vital force.

The feathers that surround the figure at the center of this scepter indicate that it is an nkisi, a medicine of God, concerned with “things of the above.” With a hand raised to its mouth, the figure bites munkwisa, a tenacious plant used in the investiture of Kongo political leaders.
Munkwisa leaves are associated with an ability to endure. This sculpture was made to be used within the context of Mpemba, an organization concerned with fertility and the treatment of infertility, founded by a famous Kongo midwife.

The female figure’s studded cap, chiseled teeth, and scarification indicate her aristocratic status. Both the brass tacks and the glass eyes were imported. The light-reflecting glass was associated with an ability to see into invisible spiritual and ancestral realms.

Commentaires sur Art of Democratic Republic of the Congo at High Museum of Art, Atlanta