A pair of Chinese verte-imari armorial wine coolers for the Portuguese market, Kangxi period, circa 1720

A pair of Chinese verte-imari armorial wine coolers for the Portuguese market, Kangxi period, circa 1720 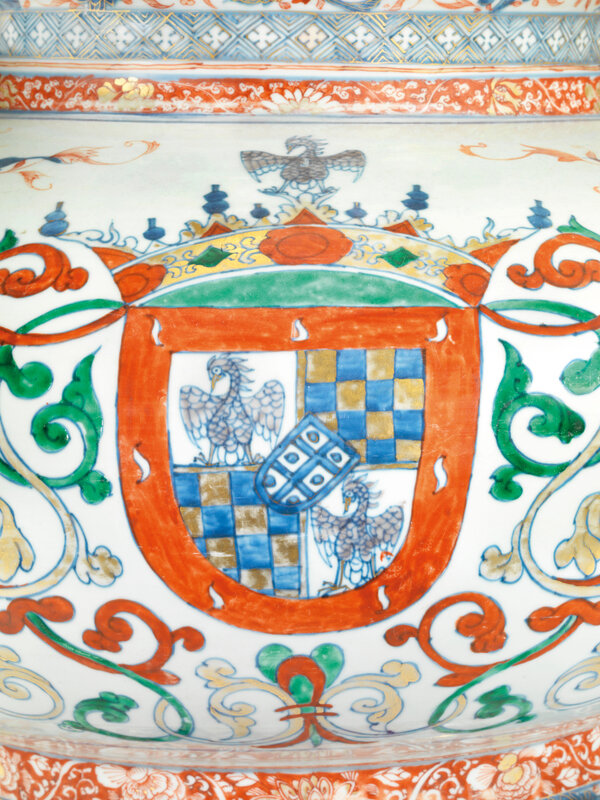 Each colourfully decorated and highlighted in gilt with the coat-of-arms for the Sampaio e Melo family, surrounded by floral sprays and separated by a pair of gilt-bronze lion-mask and loose ring handles.

Note: These magnificent wine coolers, sometimes referred to as 'monteiths’, are from one of several armorial services made during the first quarter of the 18th century for the Sampaio e Melo family. However, the person or even branch of the family for whom they were made, has been a matter of much speculation and contrasting views. This is discussed at length by A. Varela Santos, Portugal in Porcelain from China: 500 years of Trade, vol. III, London, 2009, pp. 822-831. It is most likely that this service was ordered for Francisco José de Sampaio Melo e Castro (1675-1723), 11th Lord of Vila Flor, Viceroy and Governor of India from 1720 until 1723.

What is undisputed is the importance and magnificence of the pieces in each service. From the known examples, the services comprised, as mentioned by Maria Antónia Pinto de Matos, The RA Collection of Chinese Ceramics: A Collector's Vision, London and Lisbon, 2011, p. 31, "the rarest and most sophisticated examples of porcelain ever made in China for the Western market".

A slightly smaller pair of wine coolers of identical shape is in the Museu Nacional de Arte Antiga, Lisbon, together with a rectangular tea-caddy. Other rare forms include a rectangular knife or cutlery box with sloping cover (now in the Fundação Ricardo do Espirito Santo Silva, Lisbon), a pair of tripod sugar castors in the same museum, a very unusual globular flask and cover (in the Fundação Oriente, Lisbon), as well as chapel candlesticks, barbers’ bowls, trays, tea-caddies. These examples, together with plates, dishes etc., are illustrated by Santos, ibid. pp.822-831 ; by de Matos, ibid. pp. 31-51; by N. de Castro, Chinese Porcelain and the Heraldry of the Empire, Oporto, 1988, pp. 62-69 ; by Conde de Castro e Solla, Ceramica Brazonada, vol.II, Lisbon, 1930, p. 117 and pls. CLXXXVI and CLXXXVII, amongst many other publications.