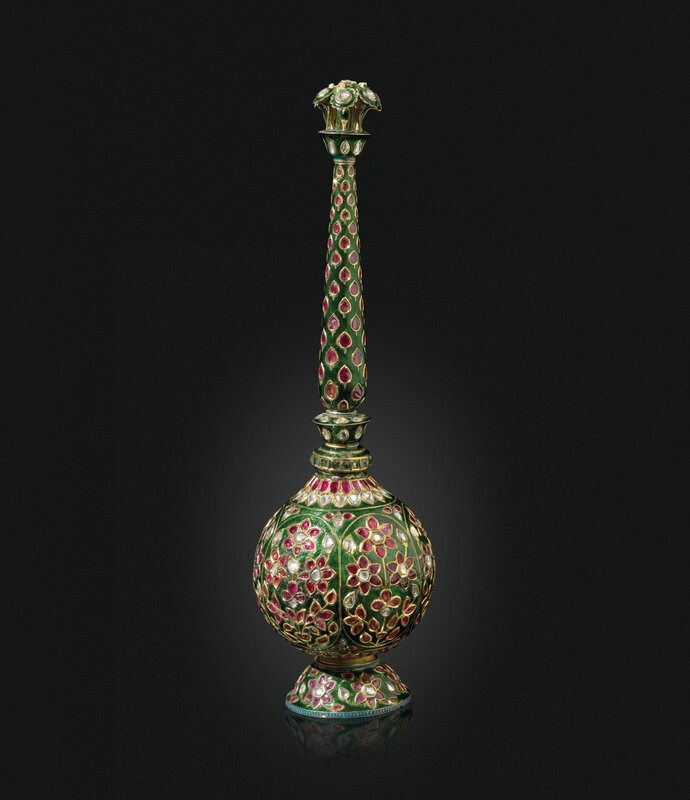 Of typical form, set with diamonds, rubies and emeralds, body decorated in green enamel with some areas of light blue enamel, the base undecorated, in three parts.

Note: Rosewater, sprinkled on honored guests when they arrived, using a bottle (gulab pash) like the present example, was a tradition in Mughal India and across Islamic lands. The sprinkling of rosewater had a ceremonial and social significance. The custom was observed in the context of a durbar assembly or a social gathering as a mark of favor or hospitality. The Emperor Jahangir refers to the sprinkling of rosewater at the Mughal court in his memoirs, ‘the assembly of gulab-pashi took place and has become established from amongst customs of former days’ (quoted in Zebrowski, London, 1997, p.69).

An elaborately gem set bottle such as this would have been made in an imperial workshop. The green enamel employed for decoration suggests this sprinkler was produced in North India or the Deccan. The form of the vessel and the gem setting indicate a late eighteenth or early nineteenth century date. Similar long-necked bottles were made in gold, silver and filigree. A silver gilded bottle of comparable form is in the Clive collection at Powis Castle, and appeared in an inventory of 1770 (Paris 2017, p.193). The large oval panels decorated with gem-set single flowers can be compared to the decoration on a silver-gilt enamelled huqqa base, possibly from Lucknow from around 1800, in the Khalili Collection (inv.no. JLY 1716; Carvalho, 2010, pp.162-163, no. 71).