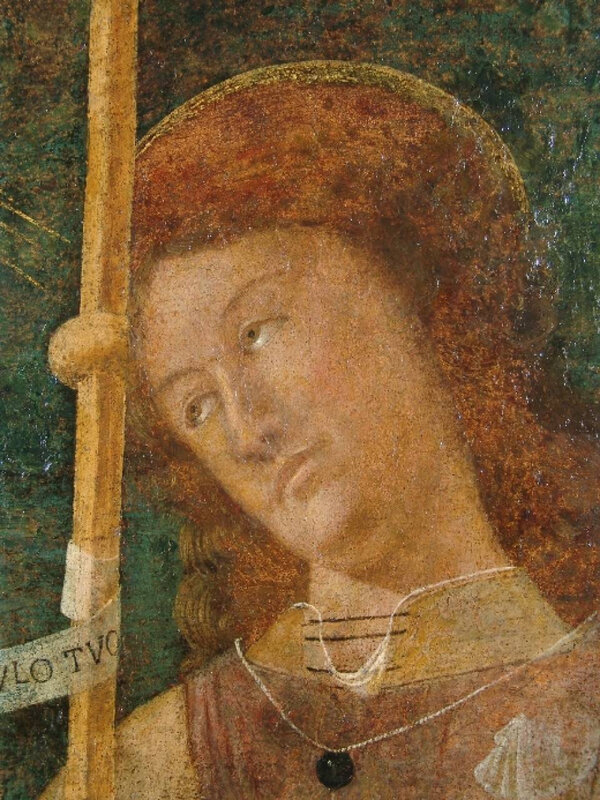 FLORENCE.- Bartolomeo della Gatta’s 15th-century panel painting of Saint Roch has been returned to the Museo Horne in Florence following a multifaceted restoration process. The restoration by Valeria Cocchetti and Daniele Ciappi, under the supervision of the Soprintendenza di Firenze, was made possible thanks to donations by Donna Curry, Mary Mochary, and Donato Massaro through the Friends of Florence Foundation.

“Once again, Friends of Florence has stepped up on behalf of our institution,” said Elisabetta Nardinocchi, director of the Museo Horne. “This time, the Foundation financed a restoration that was particularly complex because of the painting’s history and condition. Professor Antonio Paolucci, president of the Fondazione Horne, and I are deeply grateful. When our founder, Herbert Horne, purchased the work in 1909, he was fully aware of the many problems that time had inflicted on it, yet still considered it one of Bartolomeo della Gatta’s best paintings. We know he would have appreciated this effort that recovered the vibrancy of this beautiful portrait.”

“Working with the Horne to preserve its masterpieces is always a wonderful experience,” added Simonetta Brandolini d’Adda, president of Friends of Florence. “After the restoration of the Museum’s album of drawings by Giovanni Battista Tiepolo and other projects, the Saint Roch undertaking engaged us once again on behalf of the Fondazione Horne, an institution that is particularly dear to us because of our shared affinities to preserve Italian Renaissance treasures. I thank Elisabetta Nardinocchi for having involved us in the project; Valeria Cocchetti, her staff, and assistants who did the meticulous work, and our donors, because none of this would have been possible without their generosity.”

The painting
Before the restoration, the painting had been thought to be one the artist and historian Giorgio Vasari (1511‒1574) described positively in his “Life of Don Bartolomeo della Gatta, Abbot of S. Clemente” as having been painted in 1485‒86 for the Servite church of San Pier Piccolo in Arezzo. But there was no definitive proof it was the one Vasari noted. Bartolomeo (1445-1502) had returned to Arezzo shortly before then, enriched by the experience of working in the Sistine Chapel in Rome.

Severely damaged by troops quartered in the building in 1859, the painting remained in the monastery until the next year. Hastily repaired and placed on the market, it was purchased by Herbert Horne in 1909 in despite the flaws. The painting underwent conservation in 1928 and 1963. However, the extensive repainting and inappropriate work on the wooden support led several scholars to reject the theory that it was the painting Vasari mentioned. Now, thanks to the careful reconstruction of documentary evidence, the acquisition of a series of historic photographs of the previous restorations, and because the work is again legible, scholars are confident that it is indeed the painting Vasari had admired.

The restoration
Saint Roch by Bartolomeo della Gatta is a gabled panel painting depicting the almost life-sized saint in the foreground. Over the centuries, the painting had suffered damages due to historical events and intrinsic problems related to the artist’s technique leaving it in a precarious condition. Shifting of the wooden support caused the surface to flake.

Previous attempts intended to address the deterioration by repainting the lacunae and fastening a rigid metal crosspiece to the back. That intervention caused further damage by blocking the natural expansion and contraction of the wood and compressing the original paint on the surface. By the time the painting reached the current conservation team, there was widespread flaking across the paint surface and further losses of color.

Restoration began last year with removing the metal crosspiece and adding a system of three crosspieces with resilient joints that can withstand and support the natural shifts in the wood. This also brought the panel back to its correct and natural curvature. Conservators were then able to proceed with securing the paint surface. For cleaning, minimum intervention was applied because the damages suffered by the original paint were such that there was no guarantee of a perfect retrieval of the image. The goal of surface cleaning was to improve the entire image. The lacunae were filled and the areas that had been repainted in the past and altered over the years were color-balanced to match the level of legibility that had been achieved.

While some restorations focus on revealing or detecting “hidden” aspects of the artwork, this project was aimed at achieving the best outcomes possible so the painting may be studied and appreciated further.