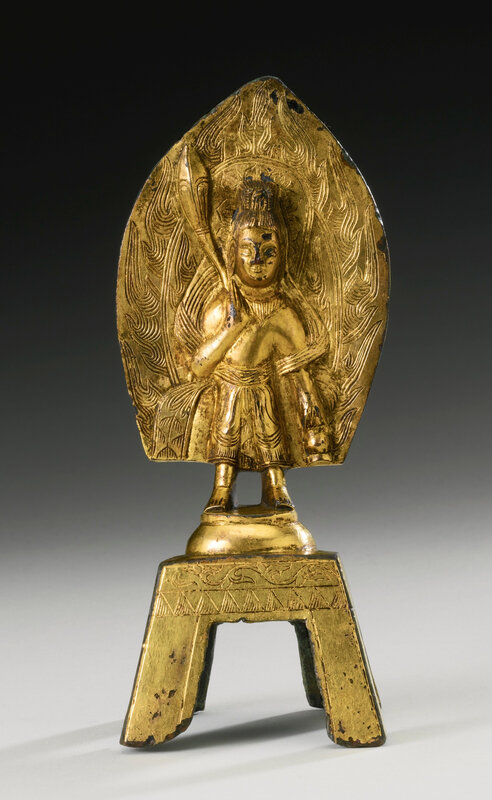 the figure cast with right hand holding a stem with large lotus bud over the shoulder, the left hand to the side holding a flask, standing on a domed base raised on a four-legged plinth, the upper body bare except for a triangular necklace, clad in a dhoti and long scarf draped over the shoulders and upper arms, the face with a pensive expression below hair swept into a chignon fronted by a three-leafed crown, framed by a circular halo of radiating lotus petals, all against an integral lotus leaf-shaped mandorla incised with two registers of flames, the back incised with a dedicatory inscription, continuing onto  the sides and back of the plinth, Japanese wood box (7). Note: The present, finely modeled gilt-bronze figure of bodhisattva Padmapani is known as the” lotus bearer” –a manifestation of Avalokitesvara, or Guanshiyin in Chinese, was especially popular in early Chinese Buddhism. This much revered Deity of Compassion and Mercy was an emanation of the oldest of the five cosmic Buddhas, Amithaba, and was believed to have created all things animate as well as being the personification of the all-pitying one and the power of creation, represented by the padma or lotus flower held in his hand. As seen here, Padmapani is generally portrayed in a majestic standing posture, holding his symbol, the lotus flower, in his right hand over his shoulder, signifying purity and spiritual elevation. He is dressed like an Indian prince, with the elegant folds of his dhoti hanging down over his knees.

The figure displays characteristics closely associated with the second half of the fifth century, that may be traced back to Gandharan models, as explained by Hugo Munsterberg in ‘A Group of Chinese Buddhist Bronzes From the D’Ajeta Collection’, Artibus Asiae, op.cit., p. 193. Munsterberg notes that the Northern Wei artists were inspired by Western, Indian and Central Asian prototypes, both as regards style and iconography even though they modified these to suit their own artistic traditions and religious conceptions.  While the Indian Padmapani is nearly always depicted with a lithe body, swaying hips and the head gently tilted to the side, the overall style resulting in a graceful curvilinear form, the Chinese artist has created an object of worship that is quite different. This Padmapani displays strength, with its straight stiff body, which is further enhanced by the fierce fire design found on the mandorla. Another aspect worth noting is the compact size of this piece, suggesting that it was made for ease of transportation.  Early portable objects of worship were made in great numbers and became important in spreading Buddhism in China.

The style of this gilt-bronze figure is very close to a similar gilt-bronze figure from the Avery Brundage Collection and now in the Asian Art Museum of San Francisco, illustrated in Rene-Yvon Lefebvre d’Argence (ed.), Chinese, Korean and Japanese Sculpture in the Avery Brundage Collection, Tokyo, 1974, pl. 20, with an almost identical inscription. The only difference being that the abbreviation mark on the back of the present lot, is missing on the Brundage piece.  The two pieces are so similar that the author of the Avery Brundage collection catalogue, ibid., p. 58,  erroneously listed the publication details of the present lot rather than the one in the museum’s collection.

A number of other related dated examples are known in museums and private collections. For example, see one dated to 485 in the Seattle Art Museum, Seattle, illustrated in Mayuyama, Seventy Years, op.cit., pl. 112, together with a slightly later example, dated to 543 of the Eastern Wei period, in the Tokyo National Museum, Tokyo, pl. 117. Another gilt-bronze figure of Padmapani is included in Saburo Matsubara, Chugoku bukkyo chokoku shiron, vol. 1, Tokyo, 1995, p. 108a, dated to 464; one, a gift from P.T. Brooke Sewell to the British Museum, London, is published in W. Zwalf (ed.), Buddhism – Art and Faith, London, 1985, p. 199, pl. 294, dated to 471; and an example in the National Palace Museum, Taipei, is illustrated in Recently Acquired Gilt-Bronze Buddhist Images, Taipei, 1996, pl. 4, dated to 498.