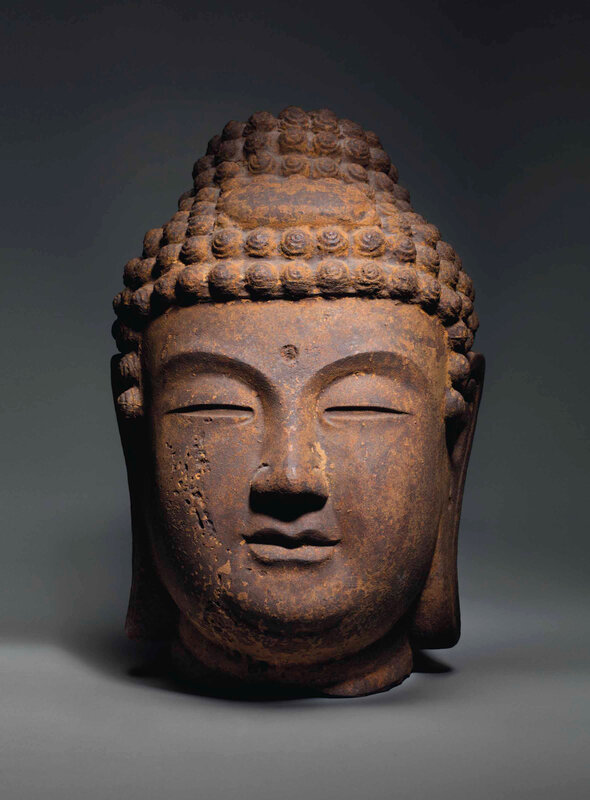 The large head finely cast, with eyes cast down and the mouth closed, the hair in tight curls over the ushnisha, an urna at the center of forehead, the wide neck cast with a double fold and ending in an irregular edge.

Note: For a similar work in the collection of Detroit Institute of Arts.

Transmitted from China in the 4th century, Buddhism quickly took root in Korea and, despite its foreign roots, would become an influential political, religious, and cultural force during the Three Kingdoms (57 BC–AD 668) and subsequent Unified Silla (668–935) periods. The earliest Korean sculptures, which date to the late 4th or early 5th century, occur in gilt bronze and fired clay and closely follow contemporaneous Chinese models. By the 7th century, distinctive Korean styles and iconographic types had emerged, evinced by National Museum of Korea’s renowned gilt bronze sculpture representing the Pensive Bodhisattva Maitreya (National Treasure no. 83).

In AD 660 the Silla Kingdom (57 BC–AD 668) conquered Baekje (18 BC–AD 660) and in 668 vanquished Goguryeo (37 BC–AD 668), establishing the Unified Silla Dynasty and politically unifying the peninsula. Buddhism enjoyed state patronage during the Unified Silla period. In fact two of Korea’s greatest architectural monuments, Bulguk-sa and Seokguram Grotto, were created in the Silla capital, modern Gyeongju, under royal patronage between 751 and 774; extant today, both temples were added to the UNESCO World Heritage List in 1995.

With its right hand in the abhaya-mudra, or gesture of “do not fear”, and its left hand in the varada-mudra, or boon-giving gesture, the gilt bronze Standing Buddha (lot 95) likely represents either the Historical Buddha Shakyamuni or the Buddha Amitabha in preaching mode. Created in the 8th century, this sculpture boasts a full, round face, domed ushnisha, and clinging robes that reveal the body’s form, features that recall those of contemporaneous Chinese sculptures. In fact, the 8th-century Chinese style—the mature style of China’s Tang dynasty (618–907)—is termed an International Style because it strongly influenced the sculptural traditions of Korea and Japan. Despite its similarities to Tang sculptures, this Buddha definitely is Korean as revealed most compellingly by its fully open back, presumably left open for technical reasons of casting. The backs of early Chinese gilt bronze sculptures, by contrast, are always closed. Other, more subtle, characteristics also identify this sculpture as Korean: the head that is large in proportion to the body, and the shoulders that are narrow in proportion to the head. The face too is distinctively Korean in style, with small mouth, high cheekbones, and long narrow eyes set under bulging eyelids and beneath arching eyebrows that are partly incised. In eighth-century Korean bronze Buddhas, a pronounced zigzag pattern animates the drapery in the triangular area where the hips join the abdomen; this slightly mannered surface texturing is virtually always present in eighth-century, Korean bronze Buddhas, just as it is typically absent in related Chinese sculptures.

Chinese sculptors began to cast iron images of the Buddha during the Tang dynasty, with Korean sculptors following suit during the ninth century, late in Unified Silla, and continuing through the Goryeo Dynasty (918–1392). The large cast iron heads we see today (lot 94) likely graced seated images of the Buddha. Stylistically descended from eighth-century images, the distinctive facial features of such iron images become even more pronounced, their cheekbones high, their cheeks fleshy, their narrow eyes deep-set under arched brows and heavy lids. That the small, snail-shell curls of hair fully cover the ushnisha, rather than stopping short of its crest, dates this sculpture to the Goryeo Dynasty, just as the very prominent cudamani, or “crown jewel”—the unembellished ellipse below the ushnisha—likely points to the sculpture’s 9th- to 10th-century date. Not meant to be seen, the raw surfaces of such Chinese and Korean cast iron sculptures were covered with gesso and then painted and gilded. The small pits on the Buddha’s right cheek, which are original to the casting, thus would not have been visible when the sculpture was under worship.

With the establishment of the Goryeo Dynasty in 918, Korea’s capital moved north to Gaegyeong (modern Gaeseong, in today’s North Korea). Named the state religion, Buddhism flourished during Goryeo, the period’s most notable works of art being the famous celadons and the rare, meticulously painted Buddhist scrolls representing Buddhas and bodhisattvas. Like the sumptuous paintings, gilt bronze sculptures from the Goryeo era also boast rich embellishment. The 13th- or 14th-century gilt bronze image of Seated Bodhisattva Avalokiteshvara (lot 96) sports bracelets and armlets, for example, not to mention elaborate necklaces from which descend stands of beads that encircle the abdomen. The crown atop the deity’s head not only symbolizes the bodhisattva’s status as a spiritual prince but holds the small representation of Amitabha Buddha that identifies this as a representation of Avalokiteshvara.

Succeeding Goryeo in 1392, the Joseon rulers established their capital at Hanyang (modern Seoul) and espoused Neo-Conuficianism as the state philosophy, pushing aside Buddhism, which sometimes was treated harshly. The 1560 painting of the Assembly of Buddha Shakyamuni on Vulture Peak (lot 97) is a testament to a short-lived revival of court patronage of Buddhism by Queen Munjeong (1501–1565), who was the consort of King Jungjong (1488–1544; r. 1506–1544) and was named Dowager Queen when her son, Myeongjong (1534–1567; r. 1545–1567), ascended the throne in 1545. Painted in gold on purple-dyed silk, the painting recalls the exquisite sutras of the Goryeo and early Joseon periods, their frontispieces painted, and their texts brushed, in gold, all on indigo-, or occasionally purple-, dyed paper.