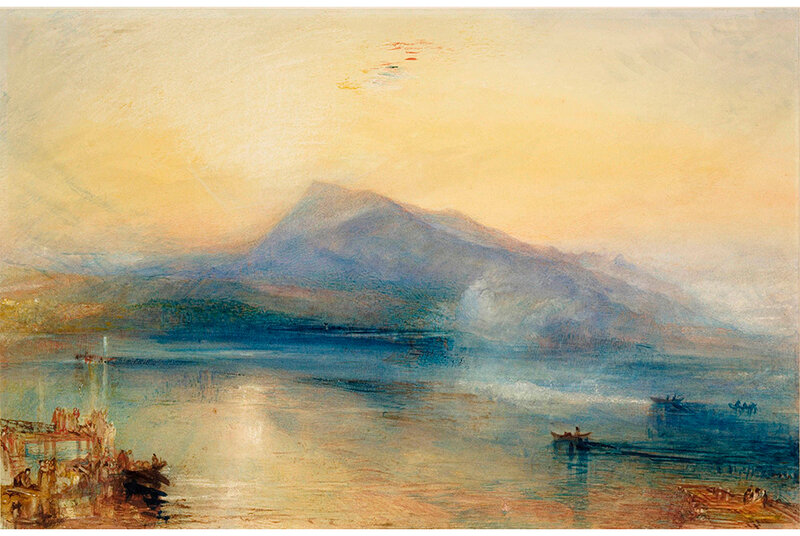 LONDON.- The Arts Minister Rebecca Pow has stepped in to place a temporary export bar on The Dark Rigi, the Lake of Lucerne by JMW Turner in the hope that the work can be saved for the nation.

Joseph Mallord William Turner (1775 - 1851) was an innovative and internationally renowned English painter, whose revolutionary work had a profound impact on the Romantic view of landscapes across Britain and Europe. Born in London in 1775, Turner studied at the Royal Academy of Arts from 1789, enrolling at the age of 14 and his first exhibition took place the following year.

In 1802 Turner made the first of many visits to Europe during which he completed numerous preparatory sketches which inspired his future works. The watercolour at risk of export was completed following Turner’s 1841 visit to Switzerland where he completed a number of studies of the Rigi mountain, and is part of a trio of famous works, The Red, The Blue and The Dark Rigi. Turner’s way of working, a serial approach to a single motif, was revolutionary and was later employed by artists such as Monet.

Valued at £10 million, the 1842 work The Dark Rigi depicts the mountain at dawn. The view in this work is unique as travellers usually climbed the Rigi to view the panorama from the summit, while Turner favoured the view of the mountain from his inn on the shore of the lake.

Arts Minister Rebecca Pow said: 'Turner is one of Britain’s greatest ever artists and The Dark Rigi is a beautiful and emotive work painted at the pinnacle of his career.

This work is of national importance and if it were to go abroad it would be a terrible loss to the country. I hope that by placing a temporary export bar we can ensure that funds can be raised to save The Dark Rigi for the nation so it is able to go on public display.'

Committee Member Peter Barber said: 'This breathtakingly beautiful view forms a part of perhaps the most outstanding series of watercolour masterpieces by Turner: those depicting the Rigi at different times of the day.'

In the nineteenth-century the Rigi was (as it has remained) the emblematic Swiss mountain and in Turner’s time the mountains of central Switzerland were as much associated - through the William Tell legend - with liberty as with sublime beauty. ‘Liberty’ was also close to the hearts of Britons, and never more so than during the tumultuous 1840s with Chartism and even revolution in the air. It was perhaps this combination which led Turner to select the Rigi rather than other mountains and which makes it particularly important that this beautiful watercolour, which works on so many different levels, should be retained in this country.

Upon his death in 1851, aged 76, Turner left behind more than 30,000 works on paper, 550 oil paintings and 2,000 watercolours. The work at risk of export is the only remaining work from the Rigi series not in a public collection.

The Minister’s decision follows the advice of the Reviewing Committee on the Export of Works of Art and Objects of Cultural Interest (RCEWA). The committee noted that the work was completed at the apogee of Turner’s career and demonstrates his masterful depiction of light.

The RCEWA made its recommendation on the grounds of the watercolour’s outstanding aesthetic importance and its outstanding significance for the study of Turner’s landscapes, artistic practice and patronage.

The decision on the export licence applications for the watercolour will be deferred until 1 December 2019. This may be extended until 1 June 2020 if a serious intention to raise funds to purchase it is made at the recommended price of £10,000,000.