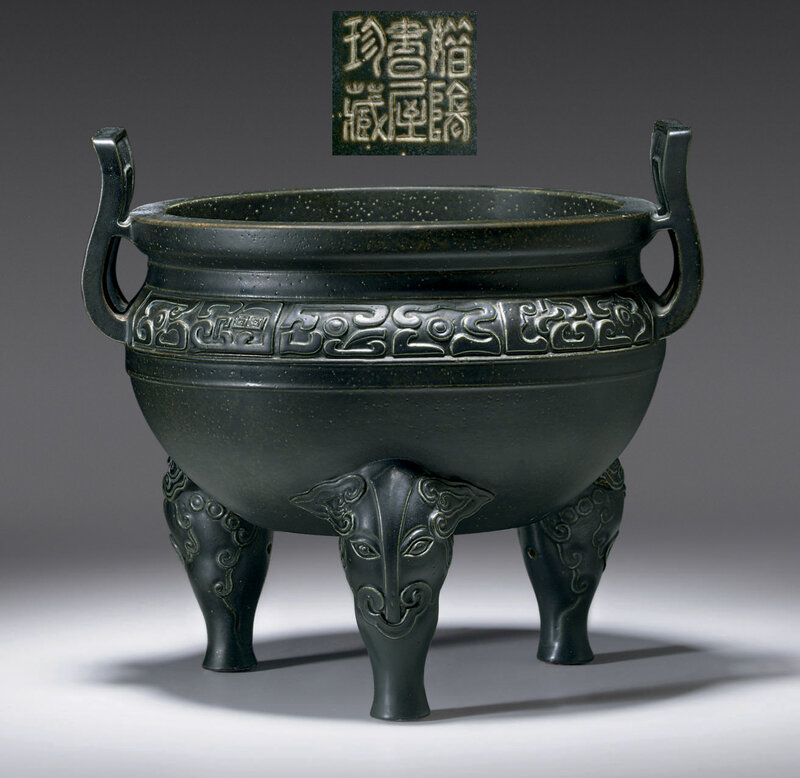 With bulbous body supported on three cabriole legs issuing from stylized animal heads, molded around the upper body with bands of simplified taotie masks above bow-string bands and beneath the everted rim, flanked on either side by a pair of bail handles, the base with six-character impressed mark reading Xinyin shuwu zhencang (Xinyin study collection).

Note: Compare a nearly identical censer of the same shape and size, also with Xiyin shuwu zhencang mark, from the Sir Percival David Collection, illustrated by R. Scott, For the Imperial Court: Qing Porcelain from the Percival David Foundation of Chinese Art, London, 1997, no. 36, where it is dated probably Qianlong or Jiaqing period. This incense burner is modelled after an ancient Chinese bronze vessel called a ding. It is covered with a matt iron-black glaze. The base has a moulded mark which reads 惜陰書屋珍藏 (Xiyin Shuwu zhencang 'Precious collection of the Cherished Time Library'). Cherished Time Library was the studio name of Wu Gengmei (1758-1825), alias Dengyu, native of Tongcheng, Anhui. He became a metropolitan graduate (jinshi) in 1799 and was later appointed Investigating Censor of the Shandong and Jiangxi Circuits. Like many of his predecessors Wu probably had a number of porcelains made while he was in Jiangxi.