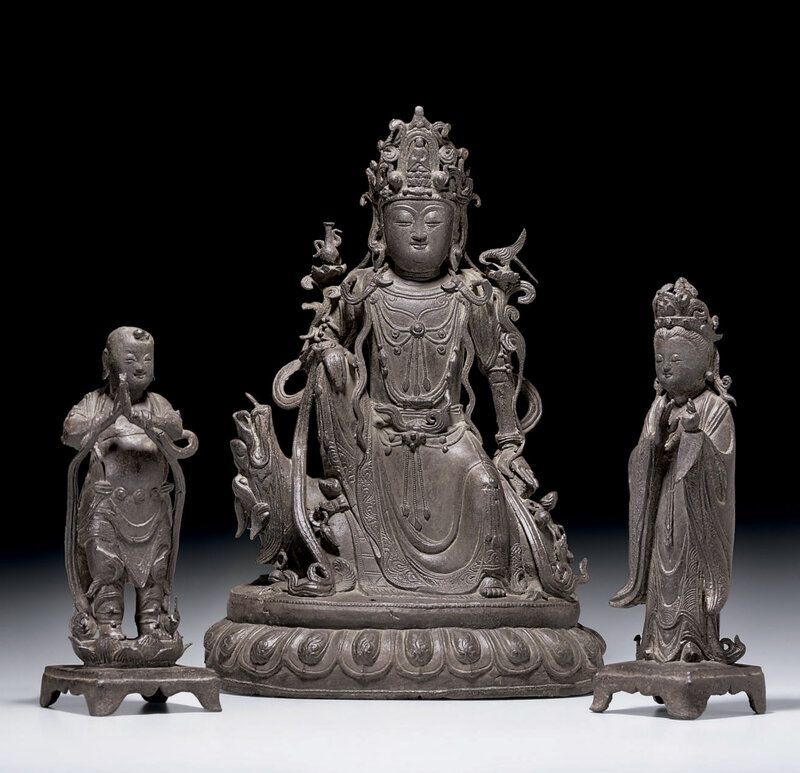 With Guanyin seated atop a large horned mythical beast raised on a lotus base, her right arm resting on her raised right knee, holding in both hands the long, winding stems of lotus flowers supporting an elixir bottle and a bird, her hair pulled up into a tall chignon behind the tiered crown set with an image of Sakyamuni, flanked by two smaller bronze figures of the disciple Long Nu holding aloft the pearl of light, and the attendant Shan Cai, standing atop a lotus pedestal with hands clasped in front.

Note: The arrangement of Guanyin, Long Nu and Shan Cai was developed from the tale of Long Nu and the Dragon King. According to legend, one of the sons of the Dragon King was caught by a fisherman while in the form of a fish. Guanyin immediately dispatched her attendant Shan Cai to rescue the son and return him to the sea. As a reward, the Dragon King sent Long Nu to present Guanyin with the Pearl of Light. However, Long Nu was so strongly impressed by Guanyin that she asked to become her disciple, and was accepted providing that she become the keeper of the Pearl, which the present figure is shown holding.