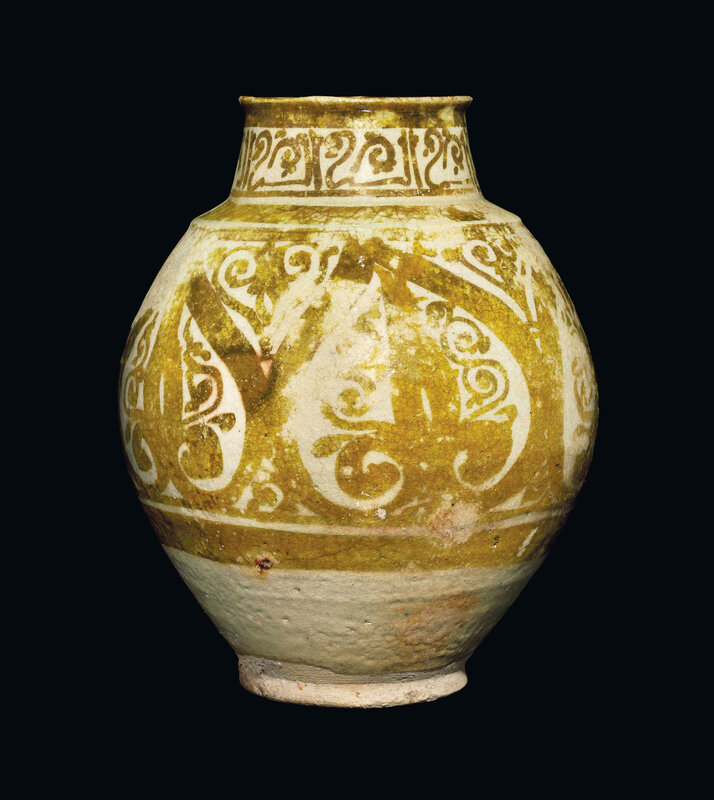 Of elegant baluster form with gently tapering neck and flaring rim, the white ground painted in golden lustre with a register of bold fleur de lys on a ground of scrolling vine contained inside drop-shaped cartouches, the neck with a further fleur de lys contained within heart-shaped cartouches, central register bordered with thick lustre bands, neck with repeated inscription in stylised kufic between further lustre bands, areas of polychrome iridescence, chip to the rim, otherwise intact.

Note: Inscription: Around the neck, al-birr or al-bar[akah], 'Piety' or Blessings'

This exceptional lustre jar is a rare and intact survival that demonstrates the artistic heights achieved by Fatimid potters. The luxury status of this jar is best demonstrated by its rich golden lustre glaze. Previously ceramics had been reserved for everyday use whilst precious metals were the preserve of the court. However, a repaired lustre bowl attributed to the 11th century in the Museum of Islamic Art in Cairo, carries a dedication to Ghaban, an officer in the court of Al-Hakim, (r. 966-1021) (inv. 12297-14389; Anna Contadini, Fatimid Art at the Victoria and Albert Museum, London, 1998, fig. 28, p.81), demonstrating that rich lustre pottery also had a place in the Fatimid court.

The courtly origin of our jar is further confirmed by its form. It is very similar to a repaired example in the Benaki Museum which also has a slightly stepped shoulder and a surface decorated with similar palmettes contained inside heart-shaped medallions (Inv. 6871, Helen Philon, Benaki Museum, Athens, Early Islamic Ceramics, Westerham, 1980, plate XII and fig.363). The form of our jar differs slightly in that it does not have blind handles present on the shoulder of the Benaki example. The absence of blind handles that would aid a practical use, suggests that our jar is not a purely functional object but rather has transitioned into an object recognized primarily for its decorative status. Another jar attributed to the late 10th-mid 11th century also in the Benaki museum is a closer example in terms both of form and design to our own jar, (Inv.225, Philon, Helen, op.cit, fig.369, p.185).

The decorative impact of our jar is enhanced by a talismanic style repeated kufic inscription around its neck. The style of calligraphy which has spiral tendrils issuing from the letters is very similar to that found on a dish in the Keir Collection (Ernst J. Grube, Islamic Pottery of the Eighth to the Fifteenth century in the Keir Collection, London, 1976, no. 98, p. 151). It is interesting to note the vegetal motifs issuing from the kufic inscription around the neck create aesthetic harmony with the vegetal decorated body. The cusped palmettes and the curved heart-shaped bands surrounding them are similar to another iconic Fatimid lustre jar in the Victoria and Albert Museum (inv. C.48-1952, illustrated on the cover of Anna Contadini, Fatimid Art at the Victoria and Albert Museum, London, 1998, cover and pl. 35). The design on the body of our jar is much more free and fluid than that of the jar in the Victoria and Albert Museum. In this respect the design on our jar is much more clearly influenced by that found on 9th century Iraqi lustre wares. This would suggest that our jar probably dates to the end of the 10th Century and is therefore an important early example of the aesthetic dialogue and transition from Abbasid lustre potters based in Iraq into what we can identify as being a Fatimid style of lustre painting centred in Cairo.