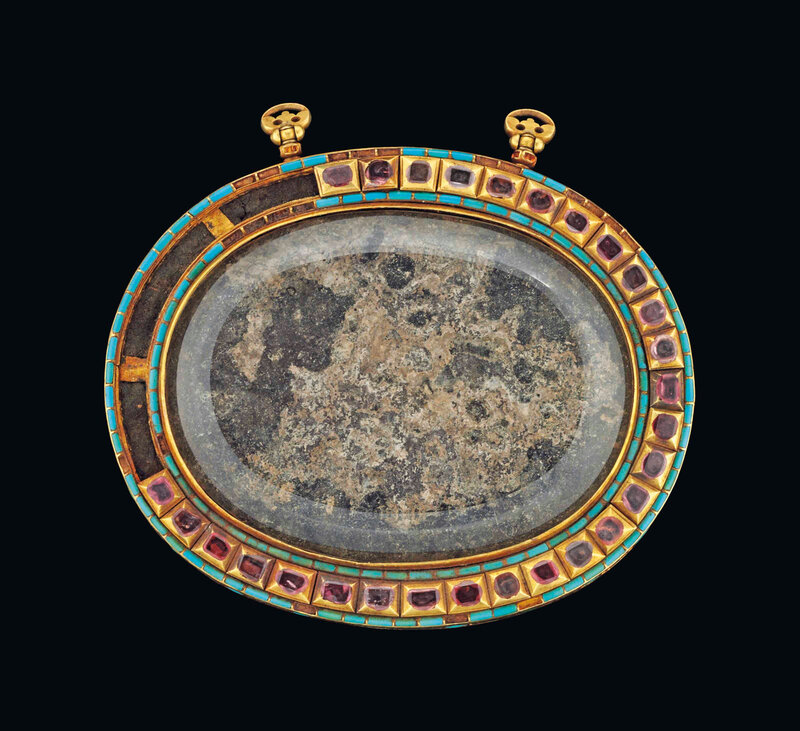 The gold panel of oval form, the back decorated in extremely elegant openwork with a dense floral vine surrounding an avian combat group, a border of meandering floral vine, the remains of textile visible beneath, around this and around the edge of the mirror a minor border set with quatrefoil turquoises alternated with glass cusped cartouches over an incised inscription, the front with a large rock crystal panel with bevelled edges mounted above a metallic disc, the rock crystal set within gold mounted pink sapphires and two bands of turquoise, two gold attachment loops above, some losses to the stones, the back slightly bent.

This mirror is an example of the finest production of the rich Ottoman court in the first half of the 17th century. The openwork gold decoration on this mirror relates closely to the work to a number of pieces, notably clocks, in the treasury of the Topkapi which are dated to the mid-17th century. One is of spherical form, and the other of rounded flattened form with a dial decorated with floral scrolls closely resembling ours (Nurhan Atasoy, Splendors of the Ottoman Sultans, Memphis, 1992, pp.238-39). A Ming porcelain bowl in the Topkapi Palace Museum is similarly embellished with a silver gilt lid worked in much the same way (The Anatolian Civilisations, exhibition catalogue, Istanbul, 1983, E.271, p.266). Both the scrolls on our mirror and the Topkapi clocks and lid have finely engraved details on the leaves and flowers that bring the design to life. All the Topkapi pieces however are silver gilt, whereas our mirror is fashioned of gold. The surface beneath the gold openwork is lined with a textile which has now for the most part corroded. This textile may well have been brightly coloured when it was first made, a ground against which the gold would have created a dramatic contrast.

One particularly unusual feature of our mirror are the small glass cartouches that frame the openwork and decorate the sides of the mirror. Beneath each of the panels are a single word in nasta'liq, including 'heart', 'splendour', 'pleasure' and 'mirror', phrases that reflect its use. It is a technique that is both playful and masterful, but hard to parallel elsewhere. A jeweled gold and rock crystal penbox and jug, both in the Topkapi palace museum use a similar aesthetic with plates of rock crystal are set over paper painted with hatayi motifs (Esin Atil, The Age of Sultan Süleyman the Magnificent, exhibition catalogue, Washington, 1987, no.61-62, pp.130-31). In aesthetic if not technique these bands resemble the bands that border the inkwell of a divit in the Topkapi palace, which is catalogued in Ottoman or Safavid, probably 16th century (Cengiz Koseogly and J. M. Rogers, The Topkapi Saray Museum, The Treasury, Boston, 1987, no.110, p.205). Both have small quatrefoil turquoise panels alternated with longer calligraphic cartouches set on gold ground.

The technique of insetting sliced turquoises creating a brilliant and sumptuous effect (firuzekari), is one that was popular in the Ottoman court. It was most widely used in the sixteenth century, when it may have been an ingenious solution to a temporary shortage of turquoise. The rock crystal panel that surmounts the now corroded metal disc of the mirror closely relates to those found on Viennese furniture greatly appreciated at the Ottoman court. There was a great demand at the Ottoman court for Viennese luxury glass and cristallo, a totally clear glass very much like rock crystal. An order from the Topkapi palace is recorded as including 'cristallolamps, screens and mirrors' in AH 963/1555-56 AD (Venise et l'Orient, exhibition catalogue, Paris,2006, cat.145, p.105). In the late 16th and early 17th century, sumptuous Ottoman-style gold coffers were produced in Venice and were appreciated by both the European and the Ottoman courts alike. In 1584 the Venetians offered one such coffer to the Grand Admiral Uluç 'Ali. A third was ordered for the Sultan in 1590, and is said to have taken three years to have made (now in the Museo de Arte Antiga de Lisbonne). Another is in the in the St. Louis Art Museum (published in Venise et l'Orient, op.cit., cat.145, p.105). It is likely that the panel used here mounted into an Ottoman work was ordered from Venice by the atelier that were appreciative of the quality and beauty of the coveted foreign material.