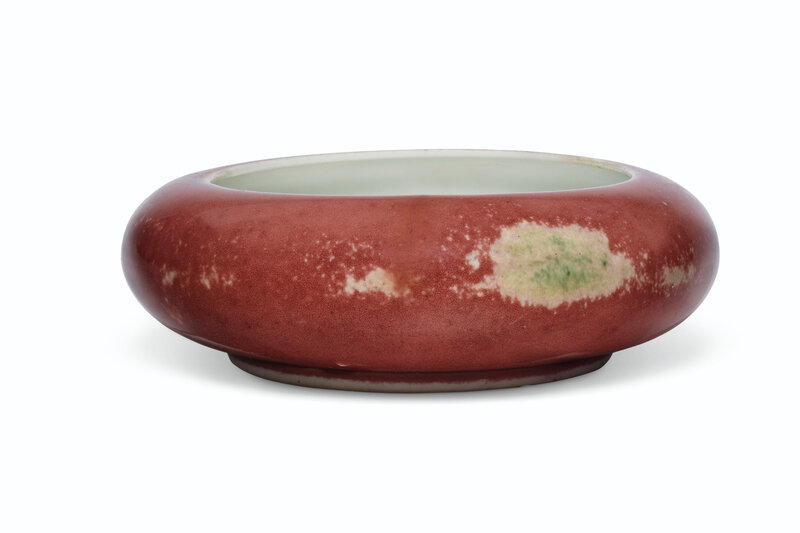 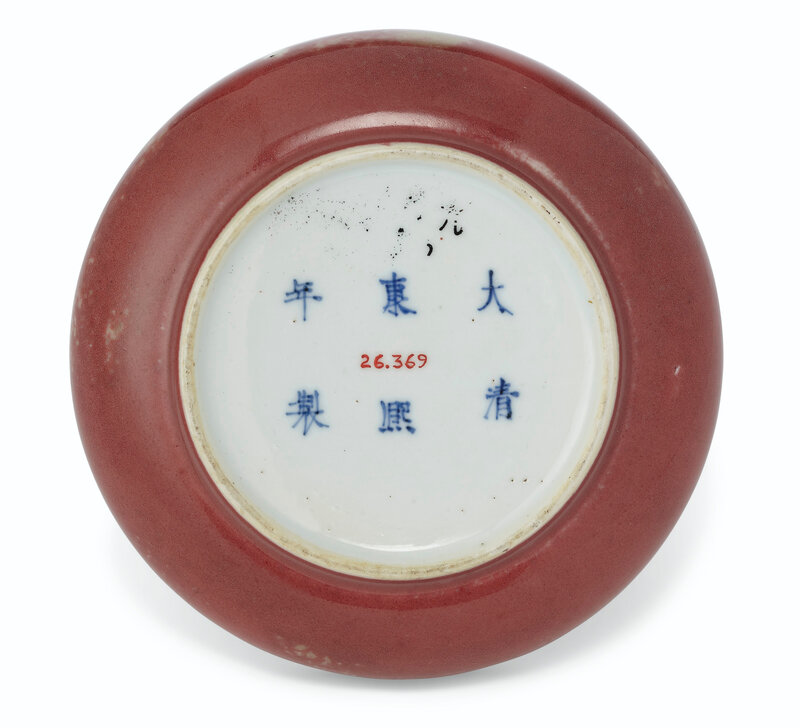 The compressed globular body is covered on the exterior with a glaze of soft rose color suffused with pale green speckles and thins to a pale pink tone on one side of the body. The interior and base are glazed white.

Note: The present washer belongs to a group of vessels covered in peachbloom glaze, often referred to as ba da ma or “The Eight Great Numbers”, made for the scholar’s desk during the Kangxi period. Examples from this group include washers (such as the present example and lot 728), water pots (lot 727), seal paste boxes and vases (lot 729). A set of eight peachbloom-glazed vessels of various shapes in The Metropolitan Museum of Art is illustrated by S. Valenstein in A Handbook of Chinese Ceramics, New York, 1989, p. 237.
In her discussion of a Kangxi peachbloom-glazed ‘chrysanthemum’ vase (jupan ping), sold at Christie’s New York, Collected in America: Chinese Ceramics from the Metropolitan Museum of Art, 15 September 2016, lot 913, Rosemary Scott notes how this technically complex glaze was produced: “Both the overall soft pinkish-red of the glaze, and the areas of clear green which appear to a greater or lesser extent within it owe their hue to copper. Firing in a reducing atmosphere creates the red color, while re-oxidation creates the green. This was therefore a glaze which had to be applied very precisely and fired with great care. Research suggests that a copper-lime pigment was applied between two layers of colorless glaze. The copper-lime pigment was applied by blowing through a bamboo tube with fine silk gauze over the end, to achieve an effect similar to modern spraying techniques. This allowed the thickness of the copper-lime layer to be adjusted so that some areas would be thicker than others. In those thicker areas there was additional flux, which thinned the upper glaze layer and allowed the copper to re-oxidise and produce clear green. In the other areas, some of the pigment was undissolved in the glaze making it appear slightly opaque and yet smooth on the surface, while the majority of the copper did dissolve and produced a rich pinkish-red, and creating one of the most highly esteemed glazes from the Qing imperial kilns.”

This type of brush washer is described as being of ‘gong’ shape, or tangluo xi (washer of gong form), as it has a very compressed body. Other Kangxi peachbloom brush washers include one illustrated by S. Jenyns in Later Chinese Porcelain, London, 1904, pl. 7, fig. 1; by M. Beurdeley and G. Raindre, Qing Porcelain, Fribourg, 1986, pl. 98; by J. Ayers, Chinese Ceramics in the Baur Collection, vol. III, Geneva, 1972, nos. A 306 and A 309; in Sekai toji zenshu, vol. 15, Tokyo, 1983, p. 34, no. 27; and another is listed in the Illustrated Catalogue of Ming and Ch’ing Monochrome in the Percival David Foundation of Chinese Art, London, 1973, no. B 582 (not illustrated). A further Kangxi peachbloom brush washer was included in the 1978 Hong Kong Museum of Art exhibition, Ming and Ch’ing Porcelain from the Collection of the T. Y. Chao Family Foundation, no. 53.