A peachbloom-glazed domed waterpot, taibai zun, Kangxi six-character mark in underglaze blue and of the period (1662-1722)

A peachbloom-glazed domed waterpot, taibai zun, Kangxi six-character mark in underglaze blue and of the period (1662-1722) 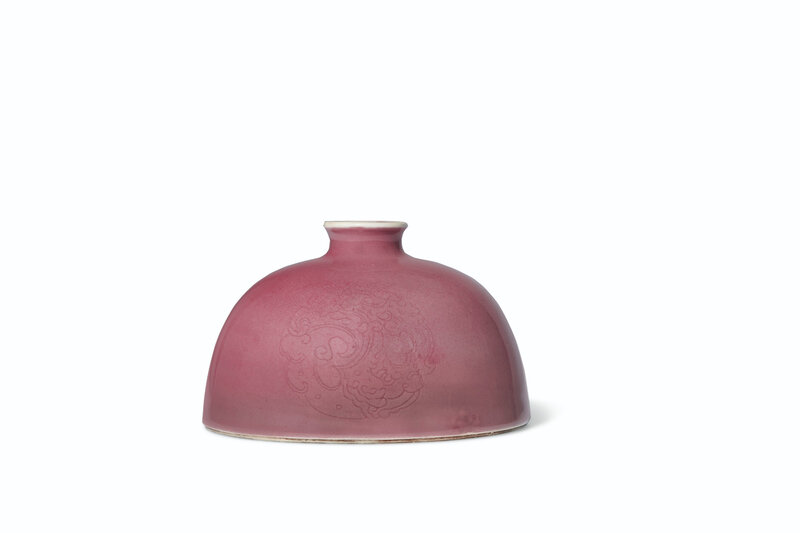 The domed body is incised with three archaistic dragon roundels and is covered with a glaze of mottled greyish-pink color shading to a darker grey above the foot.

Kate Sturges Buckingham (1858-1937)
Once known as ‘Chicago's Grandest Spinster,’ Kate Sturges Buckingham, who inherited her family’s great fortune made from grain elevators, banking, and real estate, was one of the wealthiest women in America during her time, and also perhaps one of the most generous.
Kate Buckingham’s association with The Art Institute of Chicago developed side by side with her brother Clarence Buckingham (1854-1913), who was a successful banker, as well as a governing member and a trustee of the museum. Clarence became an avid collector of Japanese prints, inspired and advised by the Japanese art curator Frederick W. Gookin, and architect Frank Lloyd Wright. Kate, on the other hand, turned her attention to Chinese art. Records show that her earliest purchases (later gifted to The Art Institute) were snuff bottles, acquired originally to please her sister, Lucy Maud (1870-1920) who suffered from poor health. White was Lucy’s favorite color, and many white wares in her collection were acquired for this reason. Kate’s own collecting taste developed in many directions, encompassing Chinese archaic ritual bronzes and ceramics as well as gothic and medieval art.

Note: Water pots of this form are known as taibai zun, after the Tang dynasty poet Li Bai, who is often depicted leaning against a large wine jar of similar form. They are also known as jizhao zun because their shape resembles basketware chicken coops that are woven with small openings at the top through which the chicks are fed.

For a discussion of the peachbloom glaze see the footnote to lot 726.