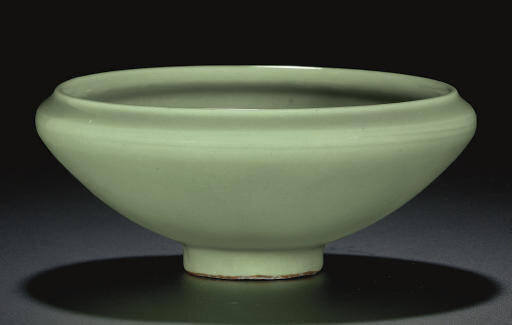 Thickly potted with rounded sides flaring from a high ring foot to an inverted rim, the center impressed with a blossoming, leafy branch within a single line border, covered overall with an even glaze of attractive sea-green tone, Japanese metal cover, Japanese wood box.

Note: The distinctive shape of this bowl, with small foot ring and wide, inturned mouth rim, is based on a Middle Eastern prototype common to both pottery and metal. For a Persian bronze bowl dating to the 12th-13th century, shown alongside a Longquan bowl of corresponding form, see M. Medley, Metalwork and Chinese Ceramics, London, 1972, p. 45, pl.15 a and b.

A Longquan bowl of very similar shape, but subtly carved with vertical petals on the exterior, is illustrated in Celadons from Longquan Kilns, Taipei, 1998, p. 163, no. 134. A number of Longquan bowls of this form, also carved with petals on the exterior, were excavated from the wreck of a merchant ship that foundered off the coast of Korea in AD 1323 on its way to Japan. See Special Exhibition of Cultural Relics Found off the Sinan Coast, Seoul, 1977, nos. 107-9.

This bowl is particularly elegant, as the plain, uncarved sides show the sea-green color of the glaze off to best advantage. Heavily potted, the center relief-decorated with a writhing four-clawed dragon chasing a flaming pearl beneath a freely carved wave design in the cavetto and below the undecorated, everted rim, the exterior carved with a series of raised ribs circumscribing the body, covered overall with a glaze of deep green tone.

Note: A dish of this type with a very similar dragon chasing a flaming pearl is illustrated by R. Krahl, Chinese Ceramics in the Topkapi Saray Museum, Istanbul, vol. I, no. 60. See, also, the example from the H.B. Harris Collection, also with a dragon chasing a flaming pearl beneath a wave ground, although dated to the Song dynasty, illustrated by R.L. Hobson et al., Chinese Ceramics in Private Collections, London, 1931, p. 126, fig. 224.

Well potted and painted with two leafy tendrils, each bearing a lotus blossom and forming a continuous scroll around the mid-section of the pear-shaped body below a band of detached scroll-filled leaf tips, all within double-line borders, and in dark grayish-red reserved against a white glaze of pale blue tone continuing into the neck and also covering the interior of the slightly flared foot.

Note: Compare the vase of very similar form and decoration in the Metropolitan Museum of Art, illustrated by S. Valenstein, A Handbook of Chinese Ceramics, rev. ed., 1989, no. 13 and again in Mayuyama, Seventy Years, 1976, Tokyo, vol. I, no. 726. Another vase in the Avery Brundage Collection, the Asian Art Museum, San Francisco, also painted with lotus scroll below a band of scroll-filled panels was included in the exhibition, Chinese Art Under the Mongols: the Yuan Dynasty (1279-1368), Cleveland Museum of Art, 2 October - 24 November, 1968, no. 167.

Other yuhuchunping painted in a similar style in underglaze red and decorated with scrolling tendrils of different flowers, including peony on a vase in the Idemitsu Museum of Arts, included in the exhibition, In Pursuit of the Dragon, Traditions and Transitions in Ming Ceramics, Seattle Art Museum, 1988, no.7, and chrysanthemum on a vase in the British Museum, Oriental Ceramics, The World's Great Collections, Tokyo, 1981, vol. 5, no. 74. The pear-shaped body raised on a knife-pared foot rim and surmounted by a slender neck rising to a flared mouth, covered overall with a glaze of even pale olive-green tone, the unglazed foot ring burnt orange in the firing.

Note: Compare the smaller Longquan celadon vase of similar form excavated from a shipwreck off the Korean coast included in the special exhibition at the National Museum of Korea, and illustrated in the catalogue, cultural Relics Found off the Sinan Coast, 1977, no. 42. The 'Sinan wreck,' as it is commonly referred to, was the wreck of a Chinese merchant ship that sank off the coast of Korea in 1323 while carrying a cargo of Chinese wares including a large group of Longquan celadons and other Chinese ceramics.