The shallow, rounded sides raised on a tapering ring foot painted in purplish-blue tones on the exterior with two pheonixes in flight separated by cruciform clouds, one with long trailing tail feathers, the other tail feathers scrolled, with three detached clouds on the slightly convex interior, all within double-line borders. 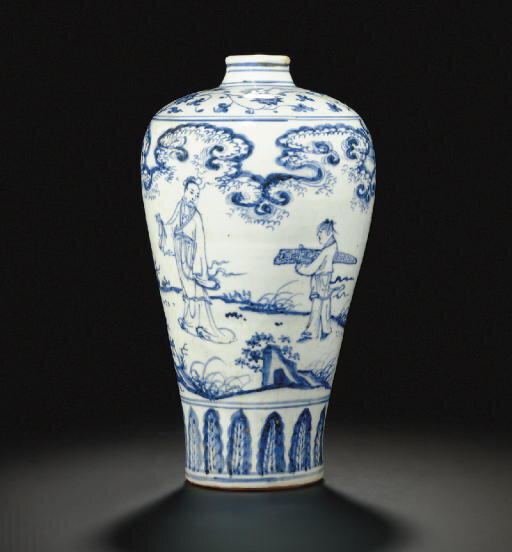 Painted in 'windswept' style with a scholar and attendant standing in a landscape framed above by scrolling clouds, between a band of lotus meander on the high shoulder and upright leaf-shaped lappets at the base, all in bright inky tones of underglaze blue.

Note: See a similar 'windswept' meiping in the Benaki Museum, illustrated by L. Ashton and R.L. Hobson in the Catalogue of the Chinese Pottery & Porcelain, Athens, 1939, pl. XXIX, no. 398. Another example, also with scholar and attendant in a landscape, was sold in these rooms, 26 March 2003, lot 243.

The deep, rounded sides and concave top enclosing a hollow interior which holds hot water when filled from a circular aperture in the base that would have been plugged after filling, the exterior delicately painted with a continuous, undulating stem bearing six lily blossoms, while the dished top is painted with a central lingzhi sprig surrounded by five florets below a band of auspicious emblems alternating with flower sprigs, all interspersed with tiny cloud scrolls, box.

Exhibited: Copenhagen, The Museum of Decorative Arts, Exhibition of Chinese Art, 1950, no. 448.

Note: The style of decoration on the exterior of this unusual warming bowl is very similar to that found on 'palace bowls' of the Chenghua period, such as the example decorated with mallow blossoms in the Haags Gemeentemuseum, The Hague, illustrated by D. Lion-Goldschmidt, Ming Porcelain, New York, 1978, p. 100, pl. 66. The author refers to the decoration on these bowls as "garlands of flowers - lilies, hibiscus, mallow, gardenias - in a style hitherto unknown". The style of painting is not as bold as earlier blue and white wares, nor does it show signs of 'heaping and piling', but rather is soft in tone and incorporates shaded washes. She goes on to say that the leaves accompanying these flowers did not always correspond to the flower represented, which sometimes makes it difficult to indentify the flower.

A Chenghua 'palace bowl' in the Percival David Foundation has a very similar day lily scroll on the exterior to that seen on the Falk hot water bowl. Indeed, comparison of the Falk bowl with the illustration of the David Foundation 'palace bowl' published by R. Scott in Elegant Form and Harmonious Decoration - Four Dynasties of Jingdezhen Porcelain, Singapore, 1992, p. 52, no. 51, shows that the shape, placing and orientation of flowers and leaves on the two bowls are precisely the same. Day lilies were a popular motif in Chinese art, since they are supposed to banish grief, while a pregnant women who wore day lilies would be expected to bear a male child.

There are two hot water or warming bowls in the Percival David Foundation; see Illustrated Catalogue of Underglaze Blue and Copper Red Decorated Porcelains, Percival David Foundation, London, 1976, nos. 696 and A623, dated to the late 15th century and circa 1500, respectively. While the David Foundation bowls have attractive and lively decoration, neither is of the fine quality of the present bowl. This is also true of a hot water bowl with sketchy painted decoration similar to that of the David Foundation example in the Victoria and Albert Museum illustrated by R. Kerr, ed., Chinese Art and Design, Victoria and Albert Museum, London, 1991, p. 23, where it is dated to the period 1475-1500. Well potted with deep, rounded sides, painted on the interior in inky shades of blue with a central medallion enclosing a sprig of berries surrounded by a continuous, undulating frieze of alternating, leafy stems of camellia and chrysanthemum, each bearing a single blossom and bud, below a narrow band of white-capped waves, the exterior with a wide band of elongated petals rising from the ring foot towards a key-pattern band, all within double-line borders, box.

Exhibited: Baltimore, The Baltimore Museum of Art, Born of Earth and Fire, Chinese Ceramics from the Scheinman Collection, 9 September - 8 November, 1992, no. 78.

Note: Lianzi wan, or lotus bowls, with gently curved sides and straight rims, decorated on the exterior with a single band of long underglaze blue petals were popular with the court in the Xuande reign. The decoration on these bowls is particularly interesting for the contrast between the delicately painted floral scrolls on the interior and the boldly painted petals on the exterior. The floral scroll on the interior is also interesting since it depicts alternating chrysanthemum and camellia flowers. These provide two of the flowers of the four seasons - the chrysanthemum representing autumn and the camellia representing winter. Chrysanthemums, which bloom when many other flowers are destroyed by the cold of autumn, has a very long history of cultivation in China and are symbols of longevity. Camillias, which bloom around the time of Chinese New Year and are often associated with the celebration of that festival, are regarded as auspicious providers of joy and protection. When combined with the two other flowers of the four seasons - peony and lotus - camellia and chrysanthemum provide a rebus for 'May you enjoy wealth and honor throughout the year'. For further information on the significance of these flowers see T.T. Bartholomew, Hidden Meanings in Chinese Art, San Francisco, 2006.

This bowl bears a six-character reign mark, which is relatively rare since the majority of extant examples of this type of bowl lack marks. However, a small number of similar bowls with marks are known. A Xuande-marked bowl of the same size and decoration preserved in the collection of the National Palace Museum, Taipei, is illustrated in Catalogue of the Special Exhibition of Selected Hsuan-te Imperial Porcelains of the Ming Dynasty, Taipei, 1998, pp. 364-4, no. 155. Another example is illustrated in Blue and White Porcelains from the Collection of Mrs. Alfred Clark, Spink & Son, London, 1974, no. 12, while a third is illustrated by A. Joseph in Ming Porcelains, London, 1971, no. 30.

Bowls of similar shape and decoration, but without reign marks, include an example illustrated in Special Exhibition of Early Ming Porcelains, National Palace Museum, Taiwan, 1982, no. 23, and a bowl illustrated in Porcelains from the Tianjin Municipal Museum, 1993, pls. 76 and 77. Bowls of this type without reign marks are also preserved in the collection of the Ardebil Shrine, and illustrated by J. A. Pope, Chinese porcelain from the Ardebil Shrine, London, 1956, pl. 47 - top right - where two other examples are noted.

Bowls of this type are also related to vessels of similar size and shape with a double row of bold petals on the exterior and on the interior a lotus scroll surrounding a peach roundel, such as the example in the collection of the Palace Museum, Beijing, illustrated in The Complete Collection of Treasures of the Palace Museum - 34 - Blue and White Porcelain with Underglaze Red (I), Hong Kong, 2000, pp. 162-3, no. 154. Bowls like the current example are also related to smaller vessels with a single row of bold petals on the exterior, but with concentric arabesque bands on the interior, as exemplified by a small bowl in the National Palace Museum illustrated in Catalogue of the Special Exhibition of Selected Hsuan-te Imperial Porcelains of the Ming Dynasty, op. cit., pp. 376-7, no. 161. The domed cover painted in deep cobalt-blue with a raised medallion containing cranes in flight amidst peach and lingzhi sprigs interspersed with wispy clouds and auspicious emblems, the rounded sides of both box and cover with quadrilobed cartouches with pairs of cranes to either side of a peach or linghzi fungus, flanked by further auspicious emblems, reserved on a wan diaper ground, the rims with raised bands containing a continuous lingzhi scroll, all within double line borders, Japanese wood box.

Note: The cranes, peaches, lingzhi and wan emblems are all symbols of longevity, and suggest that this box, with its inner contents, may have been presented as an Imperial birthday gift.

Compare with three Wanli-marked boxes of closely related pattern, but lacking the additional peach sprig to the primary medallion on the cover. The first is illustrated in The Complete Collection of Treasures of the Palace Museum - 35 - Blue and White Porcelain with Underglazed Red (II), Hong Kong, 2000, pl. 109; the second is illustrated in Chinese Ceramics in The Idemitsu Collection, Japan, 1987, fig. 732; the last from the Toguri collection is illustrated in Sekai toji zenshu, vol. 14, Tokyo, 1976, pl. 103, and was later sold at Sotheby's London, 9 June 2004, lot 43. Each painted with a continuous landscape of the 'Three Friends of Winter' (prunus, pine and bamboo), the interior with a floral sprig within double circles, all raised on a high foot rim, the base with cash-shaped emblem surrounded by the characters Fu gui chang ming (riches, honor and long life), Japanese wood box. 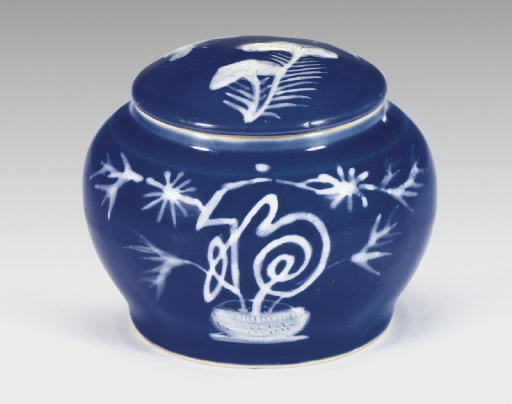 The globular body tapering towards the foot and decorated in white slip with two jardinières containing bonsai pine and bamboo, the trunks twisted into shou characters, the slightly domed cover with butterflies hovering above cockscomb, all with incised details and reserved on a soft blue ground, box. 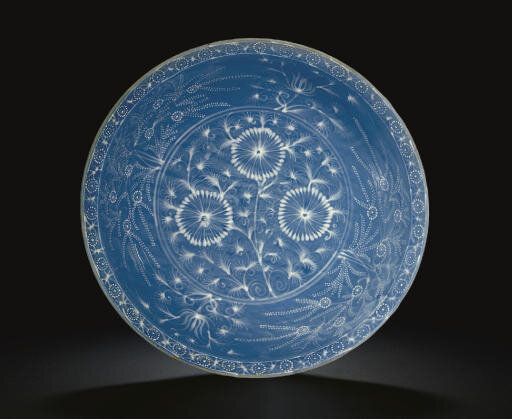 With deep sides, the center of the interior decorated with a flowering stalk bearing three blossoms amidst feathery leaves, below alternating foliate sprays in the cavetto and a decorative border on the everted rim, all in white slip applied in dots, thin lines and wash on a soft blue ground which continues onto the exterior, Japanese wood box.

Note: Wares of this type are generally known as Swatow, named after the port of Zhantou in northern Guandong province. The wares were made for export and have been found throughout Southeast Asia. It is now thought, however, that these particular slip-decorated wares with a blue or coffee-color ground were made in Fujian. Modeled and painted in rich underglaze blue as a pair of Mandarin ducks swimming side-by-side with heads turned slightly to the left, one with pierced beak, their shared hollowed bodies centered by a raised circular mouth rim, the glaze ending above the unglazed base.

Property from the Collection of Leo and Doris Hodroff. The slightly convex top with rectangular and circular apertures for brushes and ink sticks, the apertures separated by leafy branches of fruiting and blossoming pomegranate, lingzhi, lotus and chrysanthemum, the exterior painted with a continuous lotus scroll between narrow raised bands of diaper ground, Japanese wood box. The bombé body painted on each side with a recumbent qilin surrounded by clouds, and flanked by a pair of elephant-head handles, all between a band of wan diaper and auspicious emblems on the mouth rim and a band of petal lappets on the spreading foot.

The shape of this censer and the unusual elephant-head handles can be seen in a censer decorated in polychrome enamels with confronted dragons beneath a painted inscription dating to 1564, illustrated by S.G. Valenstein, The Herzman Collection of Chinese Ceramics, Metropolitan Museum of Art, 1992, p. 91, no. 89.