Ming dynasty Jade from the Metropolitan Museum of Art: The Florence and Herbert Irving Gift at Sotheby's NY, 10/09/2019

Ming dynasty Jade from the Metropolitan Museum of Art: The Florence and Herbert Irving Gift at Sotheby's NY, 10/09/2019 recumbent with the legs tucked close to the body, the pronounced ribs showing between the bent legs, two small humps rising along the spine, the neck resting against the shoulders and the head slightly bowed with the eyes open, the lips sealed and the ears relaxed, the fur finely incised at the forehead and hump, the stone a translucent pale green speckled on the surface with yellow-russet skin, pierced twice at the legs, wood stand (2) each ring of circular section incised with a ground of swirling qi and carved in high relief with either four or five prowling chilong, the dragons' sinuous limbs and bifurcated tails sweeping around the sides, their backs occasionally dipping beneath the surface and the head and forelimbs emerging at another point along the ring, the cadence of the rise and fall of the twisting bodies imbuing the rings with dynamism and movement, the stone a translucent pale celadon with a few fine russet veins and patches, Lucite stand (2)

Note:Jade 'handling pieces' in the form of interlocking rings are extremely rare, and the present set represents an early example of the type. The extraordinary skill in the carving, together with the quality of the stone, and the amount of jade that would have been reduced and discarded in the production of this set of rings all indicate the lavish circumstances under which they were produced. In addition to being sumptuous and novel, the present set appeals to lofty antiquarian sensibilities by incorporating Han dynasty-style chilong in high relief crawling across the surface. The interlocking rings would have thus conveyed the extreme wealth and refinement of its owner. the compressed pear-shaped body supported on a conforming foot and sweeping up to a waisted neck and subtly galleried rim, set to one side with a gently curving upright spout connecting to the neck by a dragon-form strut, a long S-curved handle at the opposite side, the pinnacle of the handle pierced for attaching a chain, each side of the body carved in high relief with a raised teardrop-shaped panel enclosing a dragon and its young frolicking amidst swirling clouds, the motif repeated in low relief in a continuous pattern on the body, spout, and handle, a band of keyfret at the rim, prunus blossoms floating on waves around the foot, the domed cover carved in low relief with chilong prowling above a keyfret band and surmounted by an openwork Buddhist lion-form finial, the stone a pale celadon color with a large swath of translucent gray at one side and scattered opaque beige inclusions (2)

Note: The form of this ewer derives from Islamic metalwork. Popular in the late Ming dynasty, Islamic-style ewers were produced in a variety of materials including porcelain, jade, and metal. See for example a white and russet jade example excavated from the Dingling Mausoleum, Beijing, and carved with a peach, wanzi, and shou character on the raised panels, illustrated in Gu Fang, Zhongguo chutu yuqi quanji / The Complete Collection of Jades Unearthed in China,  vol. 1,  Beijing, 2005, pl. 65. Compare also a slightly earlier spinach-green jade example with a floral spray carved into the lobed panel, with the remaining surface undecorated, illustrated in James C. Y. Watt, Chinese Jades in the Collection of the Seattle Art Museum, Seattle, 1989, pl. 96. See also a mid to late Ming celadon jade example illustrated in The Complete Collection of Treasures of the Palace Museum: Jadeware (II), Hong Kong, 1995, pl. 206, carved allover with the 'Eight Immortals' and with elaborate fittings; a plain white jade ewer with a dragon-form handle from the collection of Alan and Simone Hartman, attributed to the 16th/17th century, sold at Christie's Hong Kong, 27th November 2007, lot 1538; and a 16th-17th century celadon jade ewer carved with blossoming prunus trees in the collection of the National Palace Museum, Taipei, exhibited in Jade: From Emperors to Art Deco, Musée Guimet, Paris, 2016, cat. no. 110. 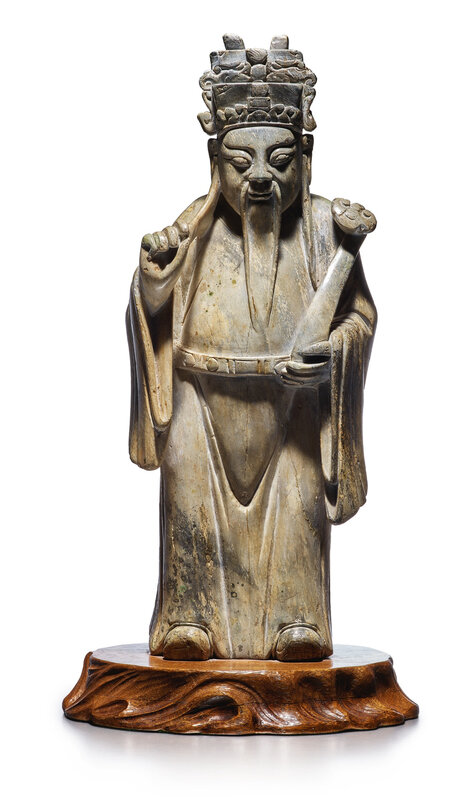 standing with the legs straight, the slightly downcast face with bulging eyes, a long beard and mustache, wearing a two-tier headdress carved with dragons in high relief, dressed in a long robe with the tips of shoes peeking out from beneath, a belt with incised plaques wrapping around the broad belly, the left arm positioned with the hand at the hip holding a ruyi scepter, the right arm bent at the elbow with the hand raised and clasping a long tuft of hair, the mottled gray stone enhanced for the 'chicken bone' effect, secured to a wood stand the recumbent mother with a small cub clambering on her back, both with large round eyes, ruyi-shaped noses, and flattened ears, the fur in fine incised lines, the spines and musculature carved in low relief, the mother with mouth open to reveal two rows of teeth, the stone a warm beige with swaths of caramel. the ovoid body rising to a slightly irregular incurved rim, one end of the rim extending to a concave surface for pouring, the opposite end with two openwork clambering chilong forming the handle, the front paws and jaws clutching the rim, the sinuous bodies and tails wrapping around the sides, the stone an even bluish-green with patches of russet, wood stand (2). the buffalo recumbent with its hind legs tucked under the body and the head resting on the folded front legs, the curved horns gently pressed against the shoulders, the tail swept to one side, a small boy crawling over the buffalo's back and holding a rope attached to the nose, the stone a mushroom-brown at the buffalo and turning to white where the boy is carved, wood stand (2) recumbent with head slightly turned, one paw raised towards the face with large eyes, a ruyi-shaped nose, and flat rectangular snout, the mouth open to expose the teeth and a recessed tongue, a curved row of bosses extending down the body to delineate the spine, the claws, fur, and curly eyebrows finely incised, the stone a deep honey gradating to beige. crouching with a large three-legged toad pinned under the chest and right arm, the toad's head emerging by the boy's gleeful face, a string of coins clutched in the left hand, the body covered in a robe falling in thick folds over the bent arms and legs, the stone an even milky white with small brown inclusions at the face and legs. the pebble carved in high relief with the two birds looking at each other and resting on a lotus pad, the larger grasping a bunch of lotus stems in the beak, one stem attached to a large blossom and another to an unfurling leaf, the smaller duck with a lotus bud, the base carved in low relief with a spray of swaying leaves, the pale gray stone with black patches. 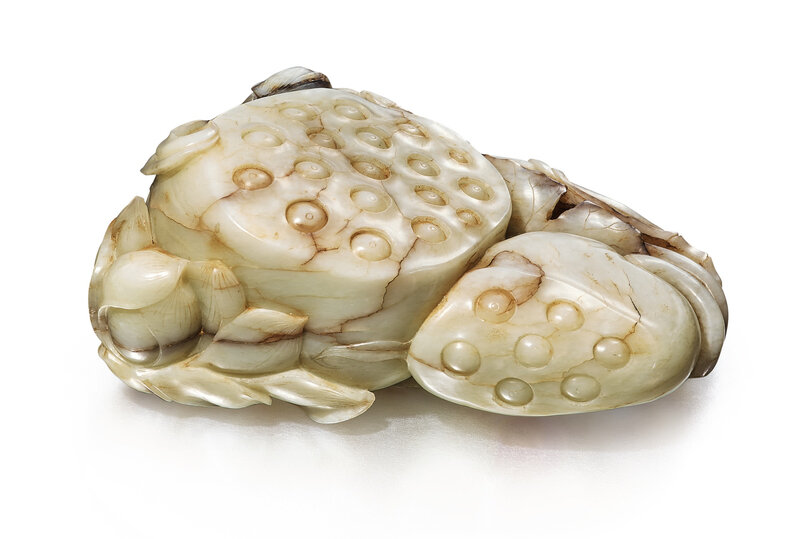 the larger pod facing upward and leaning against the smaller which is turned on its side, the seeds within each carefully modeled, thick stems snaking around the sides and beneath the pods issuing flowers in varying stages of bloom, long slender leaves, and broad pads, each element naturalistically rendered in high relief with minute details incised in fine lines, the stone an opaque creamy color with thin brown veins, the surface with a soft polish. finely carved with the larger ram and its young laying side by side, each emitting wisps of qi in the breath, the vapor moving in ruyi-form swirls between their bodies, their faces with gentle expressions, soft ears, and twisting horns, the fur carefully incised, the stone an opaque creamy white with gray veining, stand (2)

Commentaires sur Ming dynasty Jade from the Metropolitan Museum of Art: The Florence and Herbert Irving Gift at Sotheby's NY, 10/09/2019