A splendid and rare gold and silver-inlaid parcel-gilt bronze figure of a peacock, Han dynasty (206 BC-AD 220)

A splendid and rare gold and silver-inlaid parcel-gilt bronze figure of a peacock, Han dynasty (206 BC-AD 220) 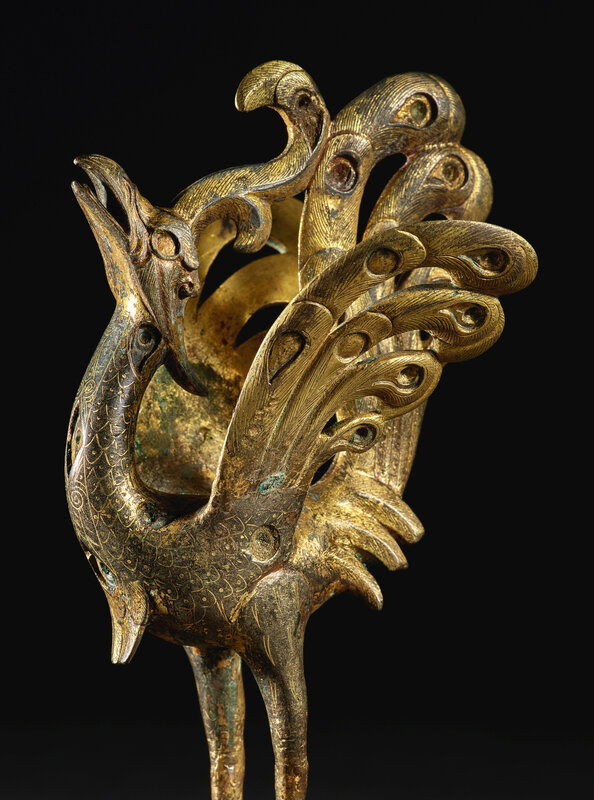 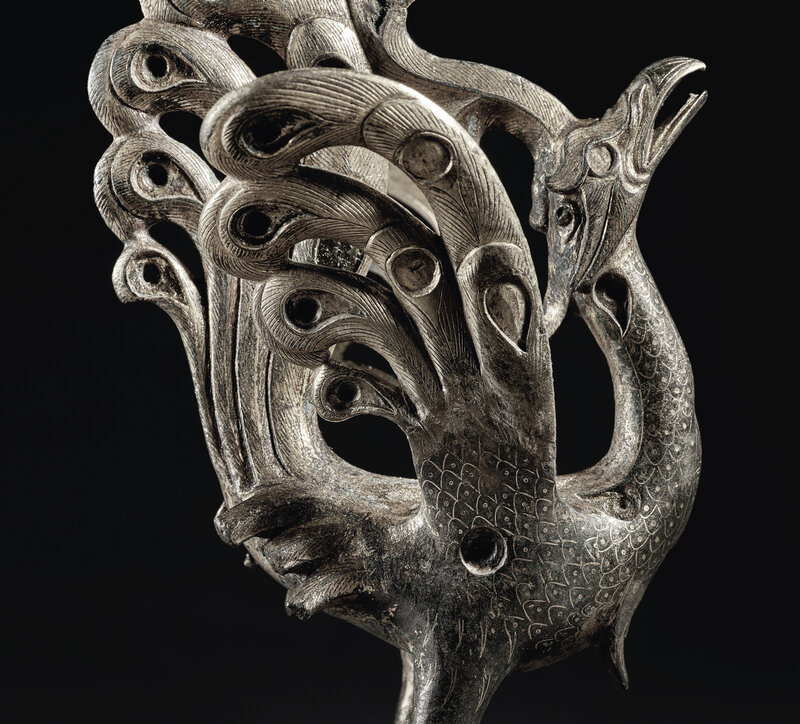 Note: Standing proudly and in all its splendor, this figure of a peacock is extremely rare for its superb casting and exquisite decoration. The flamboyant plumage, elongated neck raised high, finely sculpted head and gold and silver detailing lend this piece a luxurious and rich countenance unrivalled by other bird figures from the Han dynasty.

Peacocks were exotic creatures from the south and as they first appear in Chinese literature in the third century BC, their occurrence may represent southern tributes to the Han dynasty court from those days, see Edward Schafer, The Vermillion Bird, Berkeley, 1967, pp. 236-37. The present figure resembles a male peafowl of Asian species characterized by their eye-spotted tail and extravagant plumage. Peacocks were not merely popular as decorative motifs but represented auspicious omens (xiangrui), embodying the concern for the afterlife particularly prevalent during the Han dynasty.

Very few bird figures may be closely compared to the present piece. Of similar bearing, but smaller in size and lacking the gold-and-silver decoration, is a gilt-bronze peacock with turquoise inlay, illustrated in René-Yvon Lefebvre d’Argencé, Chinese, Korean and Japanese Sculpture in the Avery Brundage Collection, Asian Art Museum of San Francisco, San Francisco, 1974, no. 16, where three gilt-bronze peacocks are mentioned, with turquoise inlay, less flamboyant, excavated from an Eastern Han tomb near Dingxian, Hebei province.

The peacock was sometimes likened to the mythological phoenix in its artistic rendering. Endowed with similar auspicious qualities as the peacock, the phoenix appears in various decorative shapes. Compare, for example, an elegant phoenix figure displaying an elaborate tail, without inlay, included in the exhibition Ancient Chinese Bronzes, J. J. Lally & Co., New York, 2011, cat. no. 20; and another, of stockier build, also from the collection of Stephen Junkunc, III, sold in these rooms, 19th March 2019, lot 122. Compare also the phoenix lamps and censers, such as, for example, a lamp found in the tomb of Dou Wan at Lingshan, Mancheng, Hebei Province and now in the Hebei Provincial Museum in Shijiazhuang, standing on a coiled creature and holding a ring-like tray in its beak, illustrated in Zhongguo wenwu jinghua daquan, Qingtong juan,[The Quintessence of Chinese cultural relics Bronzes], Shanghai, 1994, no. 1145; and a censer from the collection of C. T. Loo, included in An Exhibition of Ancient Chinese Ritual Bronzes, Detroit Institute of Arts, Detroit, 1940, cat. no. 75.