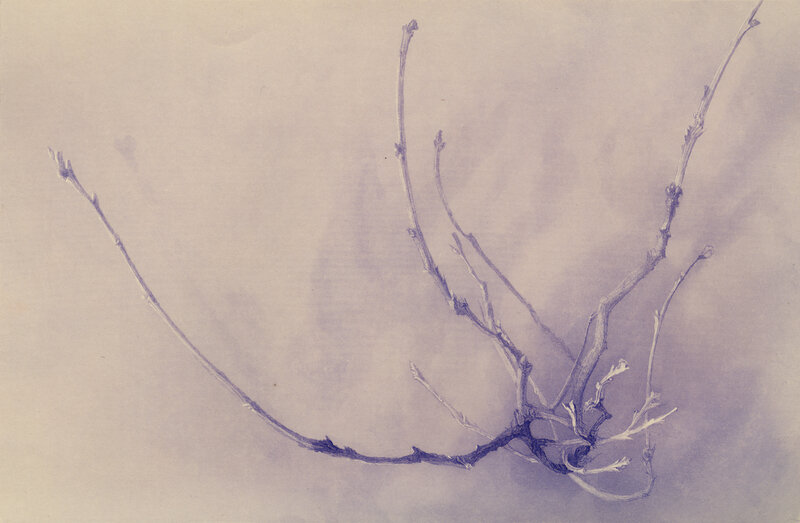 NEW HAVEN, CT —The Yale Center of British Art announces an exhibition marking the bicentenary of John Ruskin (1819–1900), one of the most influential thinkers of the nineteenth century, who believed that art had the power to transform society and that nature inspired the most meaningful art.

One of the greatest art writers in the English language, Ruskin offered new insights into the Gothic architecture of Venice and passionately advocated for the landscape paintings of J. M. W. Turner. His vigorous support ensured success for the Pre-Raphaelites, Britain’s first avant-garde art movement. However, he was at the same time a true Victorian polymath—a complicated figure equally uncompromising and fluent on a range of topics extending from the aesthetic realm to social reform, theology, and ecology, all of which he addressed with eloquent prose and trenchant analysis.

On view from September 5, Unto This Last: Two Hundred Years of John Ruskin presents more than ninety objects displayed in five galleries illustrating Ruskin’s legacy as artist, critic, social reformer, ecological thinker, and educator. The display is largely comprised of paintings, drawings, and manuscripts selected from the Center and the Beinecke Rare Book and Manuscript Library—together representing one of the most important repositories of Ruskin’s work in the United States.

Major loans from the Metropolitan Museum of Art, the Fitzwilliam Museum at the University of Cambridge, the Morgan Library & Museum, and private collections join objects from the Yale collections to demonstrate the range of Ruskin’s interests, his skill as a draftsman, and the impact of his work globally over the last two centuries. Rock and mineral specimens from the Yale Peabody Museum of Natural History complement the works of art and manuscripts, illustrating Ruskin’s belief in the visual analysis of natural forms as a means of comprehending spiritual and aesthetic truths.

Tim Barringer, Paul Mellon Professor of the History of Art at Yale, writes: “This major exhibition, curated by three Yale doctoral candidates, offers a new vision of Ruskin— troubled and contradictory, but a visionary figure. By examining Ruskin’s career as a whole—integrating the aesthetic, the sociopolitical, the ecological, and the pedagogical—the exhibition demonstrates Ruskin’s mode of interconnected thinking as a corrective model for today’s separation of arts from sciences. Ruskin’s personal and intellectual imperfections are many, but his approach to the burning issues of our own times— environmental preservation and respect for the natural world; the value of individual lives in the face of global systems; the essential role of individual creativity—demands urgent attention. Two hundred years after his birth, in an era when self-interest and the pursuit of profit at any cost have outstripped endeavors for the common good, we have rarely stood in greater need of Ruskin’s quiet yet revolutionary creed: ‘there is no wealth but life.’”

Visitors will be greeted at the exhibition entrance with a work created by the contemporary artist and experimental architectural preservationist Jorge Otero-Pailos. Distributed Monument 15 from The Ethics of Dust: Westminster Hall (2016) takes the form of latex and years of pollution transferred from London’s Westminster Hall. In this work, Otero-Pailos engages with Ruskin’s theories of historic and natural preservation. John Ruskin, The South Side of the Basilica of St. Mark’s, From the Loggia of the Doge’s Palace, Venice, ca. 1850–52, watercolor over pencil, heightened with bodycolor, Private Collection.

Proceeding into the galleries, the exhibition begins with works from Ruskin’s precocious childhood and teenage years, when his interest in J. M. W. Turner was sparked. Ruskin’s seminal book, Modern Painters I (1843), published when he was twenty-four years old, was a treatise on landscape painting with a defense of Turner at its core. Pictured here is Turner’s Venice, from the Porch of the Madonna della Salute on loan from the Metropolitan Museum of Art, New York. Ruskin had an engraving of this work in his student room at Oxford, a poignant emblem of his own formative experiences in Venice. In Modern Painters, John Ruskin advised young artists to “go to Nature in all singleness of heart . . . rejecting nothing, selecting nothing, and scorning nothing.” Rather than rely on preconceived conventions of artistic representation, Ruskin argued that artists should convey the unique truth of every natural detail, even a single leaf. Shown here is Ruskin’s Study of an Oak Leaf, an illustration testing his claim that “if you can paint one leaf, you can paint the world.”

Over the course of his lifetime, Ruskin saw industrialization, consumerism, and tourism radically alter the landscapes he loved. While many of Ruskin’s contemporaries understood nature merely as an inexhaustible stockpile of resources, he sensed humanity’s threat to natural systems, foreshadowing present-day apprehension of climate catastrophe in his text The Storm Cloud of the Nineteenth Century. John Ruskin saw education as a tool for reshaping society and was adamant that his lessons should be widely accessible across boundaries of class, gender, and age. Ruskin regularly brought objects from his own collections into his lessons and donated art, minerals, and rare books to schools and museums across Britain. He attempted to teach his students not merely to draw but to observe the world, and to labor actively for its betterment. Though his views on gender were in many ways regressive, Ruskin strongly believed in the education of girls and women, and he encouraged female artists.

In 1875, Ruskin established the St. George’s Museum, dedicated to the edification of ironworkers in the northern British city of Sheffield. Displays juxtaposed fine art with constellations of minerals, ancient coins, plaster casts, and manuscripts. Ruskin hoped that, by studying the collections, Sheffield workers might regain the reverence he ascribed to medieval craftsmen and rebuild a world destroyed by industrial capitalism. Progressive thinkers worldwide, from the founders of Britain’s Labour Party to Mahatma Gandhi, have acknowledged Ruskin’s influence. From 1857, Ruskin’s writing shifted toward social and economic topics. He visited major manufacturing towns and lectured on the “two paths” open to society: soulless industrialization, or a utopian return to traditional craft practices. Yet his solutions to society’s problems were often rooted in nineteenth-century ideas about race, gender, and class that have no place in today’s world. While his writings offered a radical critique of industrialization’s negative effects on people and the environment, they also advocated for a return to a hierarchal social order that many readers then and now have rightly rejected. Ruskin’s aesthetic, social, and political theories have been mobilized globally in ways he could not have predicted, from the United States to Japan, Russia, and India. He has influenced generations of social, political, and economic reformers around the world who have selectively embraced the best of his artistic, social, and environmental ideals, while rejecting those aspects of his life and work that best remain relics of another time. Ruskin’s theories continue to resonate two hundred years after his birth.

His text Unto this Last challenged capitalism itself and demanded equal treatment for everyone, even “unto” the very last person in line, the poorest or weakest. This powerful book contains a single phrase that distills all his wisdom: “THERE IS NO WEALTH BUT LIFE.”

Unto This Last: Two Hundred Years of John Ruskin has been organized by the Yale Center for British Art and curated by three PhD Candidates in Yale University’s Department of the History of Art: Tara Contractor, Victoria Hepburn, and Judith Stapleton; with Tim Barringer, Paul Mellon Professor of the History of Art at Yale; and Courtney Skipton Long, Acting Assistant Curator of Prints and Drawings at the Center. A version of this exhibition will to travel to Watts Gallery in Compton, Surrey, UK, where it will be on view from March 10 to May 31, 2020.

PUBLICATION A fully illustrated catalogue, with an introduction by Barringer, essays by Contractor, Hepburn, and Stapleton, and an epilogue by Long, will accompany the exhibition. Additional contributors include graduate students in the Department of the History of Art, Yale University. The book Unto This Last: Two Hundred Years of John Ruskin will be published by the Center in association with Yale University Press. 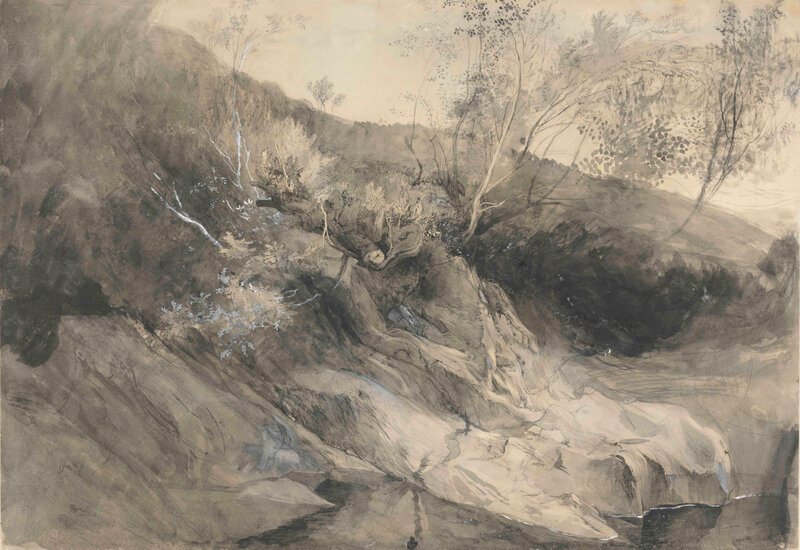 John Ruskin, In the Pass of Killiecrankie, 1857, watercolor and gouache on board, The Fitzwilliam Museum, University of Cambridge. 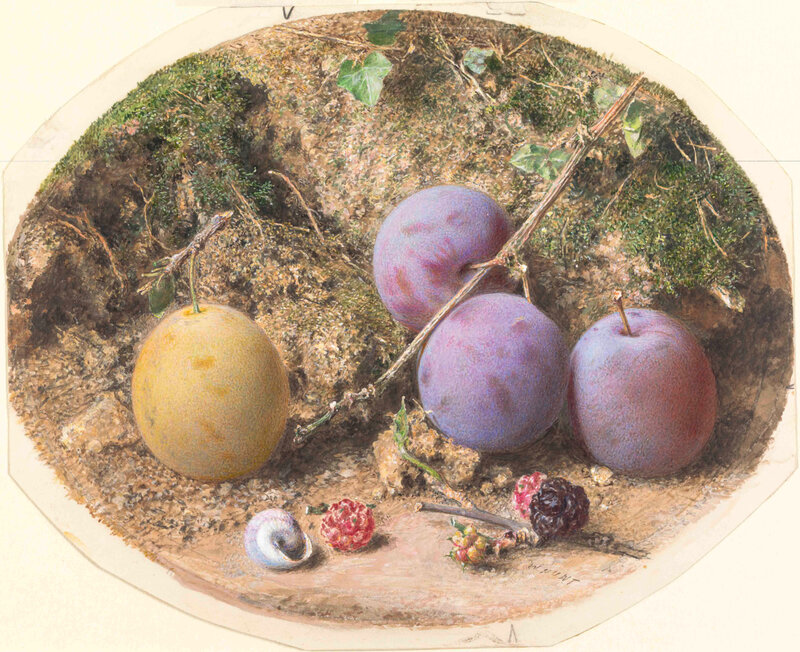