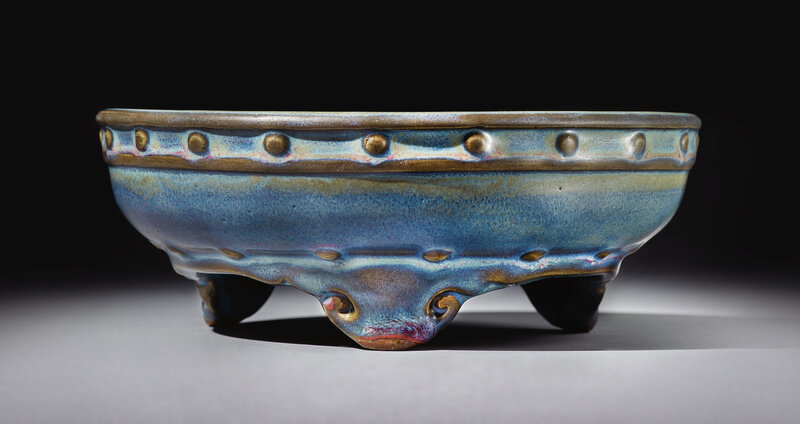 of circular section, the wide rounded sides gently tapering to a flat base supported on three ruyi-shaped feet encircled by a band of evenly spaced bosses repeated between two raised filets below the slightly incurved rim, the thick glaze of milky-lavender tone mottled with crimson-purple flecks, thinning to a mottled mushroom tone around the rim, raised studs and ribs, and pooling attractively in rich purple tones on the feet, the glaze on the interior a pale lavender color with feathery flecks of milky-blue and pale mushroom and traces of characteristic ‘worm tracks’, the base applied with a thin golden-brown wash, a ring of minute unglazed spur marks, and incised with the character si (four).

Note: This piece is representative of a distinct and rare group of Jun flower receptacles known as ‘numbered’ Jun wares, on account of the Chinese numerals inscribed on their bases before firing. These bulb bowls were most likely made for the Imperial court and were displayed in elegant gardens through the Qing dynasty (1644-1911).

Bulb bowls with such striking blue glazes were made at the Juntai kiln site in Junzhou Prefecture (today’s Yuzhou or Yuxian), in Henan province, where ceramic production lasted from the Song (960-1279) to the Ming (1368-1644) dynasty. While this type of glaze was made at various kilns in Henan province, ‘numbered’ Jun vessels have been recovered only at Juntai. The Chinese numerals inscribed on these wares range from one (the largest) to ten (the smallest), which appear to be indicative of their size and corresponding stands.

Numbered Jun wares were traditionally attributed to the Northern Song dynasty (960-1127), although recent research and archaeological evidence suggest they were more likely made in the early Ming dynasty. Scholars had traditionally relied on a mould for coins inscribed with the reign name of Emperor Huizong (1100-1126), Xuanhe, unearthed at the kiln site. This inscription is however stylistically different to that found on genuine Xuanhe yuanbao coins. Thermoluminescence (TL) tests carried out by the Shanghai Museum have further challenged the traditional Northern Song attribution, suggesting that they were made remarkably later. Jun garden wares do not appear in any pre-Ming text or painting, and their form is closer to early Ming celadon-glazed flower vessels, such as one included in the exhibition Xuande Imperial Porcelain Excavated at Jingdezhen, Chang Foundation, Taipei, 1998, cat. no. 39.

Jun garden ware appears often on contemporary paintings that depict elegant gardens. A bulb bowl of this form is depicted in the anonymous hanging scroll The Eighteen Scholars, attributed to the Ming dynasty (1368-1644), in the National Palace Museum, Taipei, included in the museum’s exhibition The Enchanting Splendor of Vases and Planters: A Special Exhibition of Flower Vessels from the Ming and Qing Dynasties, Taipei, 2014, p. 39 (top). A barbed jardinière is painted in the anonymous handscroll Elegant Gathering in the Apricot Garden from 1437, which depicts the court official Yang Rong (1371-1440) during a gathering of scholars at his home in Beijing. The painting is now in the Metropolitan Museum of Art, New York, and was included in the exhibition Ming. 50 Years that changed China, British Museum, London, 2014, cat. no. 164.

A bulb bowl covered in a similar sky-blue glaze, but inscribed with the numeral one, in the Palace Museum, Beijing, is illustrated in Selection of Jun Ware. The Palace Museum’s Collection and Archaeological Excavations, Beijing, 2013, pl. 115, together with six examples ranging from 21 to 25.5 cm in diameter, pls 94-96 and 113-116, and a reconstructed bulb bowl recovered at Juntai and now in the Research Institute of Cultural Relics and Archaeology of Henan Province, Luoyang, ibid., pl. 97; and four slightly larger examples inscribed with the numerals one and five, in the National Palace Museum, Taipei, are illustrated in A Panorama of Ceramics in the Collection of the National Palace Museum: Chün Ware, Taipei, 1999, pls 27-28 and 34-35. See also a bulb bowl inscribed with the numeral three, from the Mount Trust Collection, sold at Christie’s Hong Kong in 1991 and 1996, in our London rooms in 2003, and most recently in these rooms, 23rd March 2011, lot 514; another inscribed with the numeral four, from the Dexingshuwu collection, sold at Christie’s New York, 25th October 1993, lot 705, and again in these rooms, 18th March 2008, lot 100; and a slightly larger one, from the T.Y. Chao collection, sold in our Hong Kong rooms, 19th May 1987, lot 210.

The Yongzheng (r. 1723-1735) and Qianlong (r. 1736-1795) Emperors were particularly fond of these wares. The former instructed the Imperial kilns at Jingdezhen to create reproductions, while the latter had many Jun flower pots inscribed with hall names, presumably indicating where they were displayed. Two Jun-type bulb bowls of this form from the Yongzheng period, in the Palace Museum, Beijing, are illustrated op. cit., pls 126 and 127.