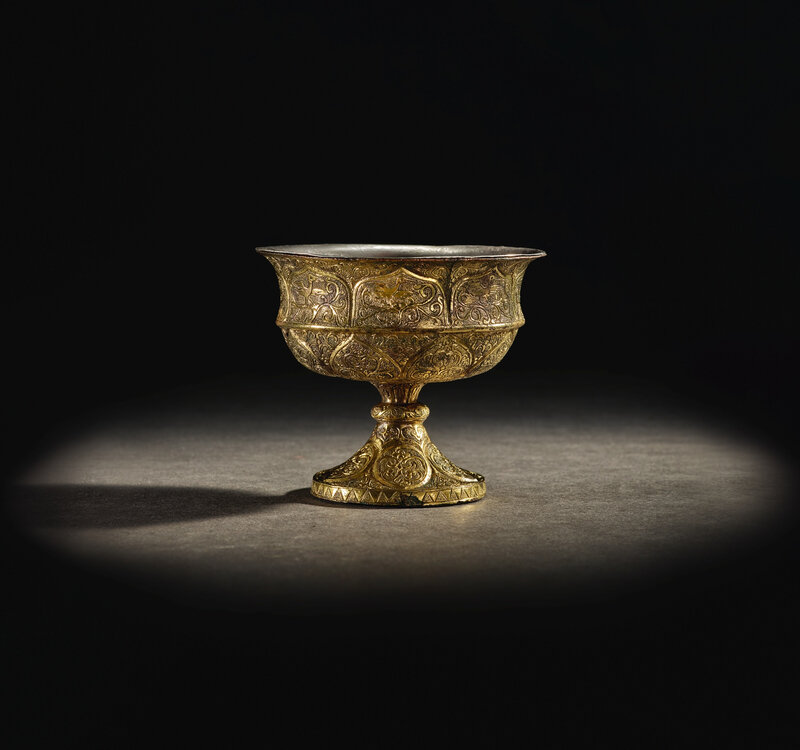 with shallow rounded sides rising to a flared rim, encircled by a raised ring dividing the cup into two sections, the upper section meticulously engraved with a band of upright petals enclosing birds and flower sprays, lower section decorated with a band of leaf-shaped petals enclosing flower scrolls and a further band of petals containing florets, the tall spreading stem foot similarly decorated with bands of petals centered by a raised foliage ring, all against a finely executed ring-punched ground, the interior and base with silver liner.

Note: Sumptuously decorated, the present stem cup exemplifies the luxuriant use of gilt-bronze and silver tableware during the Tang dynasty. The form finds its origins in Sassanian and Byzantine drinking goblets and chalices, which entered the repertoire of Chinese artisans during the Tang dynasty, who produced the form in both silver and gilt-bronze. The shape would later appear in stoneware and, eventually, porcelain. Compare a Sassanian beaten silver stem cup illustrated in Margaret Medley, Metalwork and Chinese Ceramics, London, 1972, pl. 5a, and a Byzantine silver-gilt example in the collection of the Metropolitan Museum of Art, New York, acc. no. 1986.3.3. A drawing of a fragment of a Sassanian silver-gilt stem cup, missing its stem, with a petal band below a bird design is illustrated in Bo Gyllensvärd, 'T'ang Gold and Silver', The Museum of Far Eastern Antiquities Bulletin, no. 29, Stockholm, 1957, fig. 25n.

A small number of Tang dynasty gilt-bronze cups of this petal form and bird design are known, including one included illustrated in Bo Gyllensvärd, Chinese Gold & Silver in the Carl Kempe Collection, Stockholm, 1953, pl. 108, later sold in our London rooms, 5th November 2008, lot 413;  another, formerly in the collection of Hon. Senator Hugh Scott, extensively exhibited, including in the International Exhibition of Chinese Art, Royal Academy, London, 1935, cat. no. 766, subsequently sold in these rooms, 4th June 1985, lot 34, now in the Uldry Collection and illustrated in Pierre Uldry, Chinesisches Gold und Silber. Die Sammlung Pierre Uldry, Zurich, 1994, pl. 135. A third example of this type, acquired from Mathias Komor in 1958, was offered at Christie's New York, 30th November 1983, lot 323. A similar silver-gilt example, raised on a shorter foot, in the Art Institute of Chicago, was included in the exhibition Masterpieces of Chinese Arts from the Art Institute of Chicago, Museum of Oriental Ceramics, Osaka, 1989, cat. no. 25.

A related group of silver and gilt-bronze stem cups raised on a splayed petal-shaped foot are also known. Compare silver-gilt examples including one excavated in Xi'an in 1982, illustrated in A Selection of the Treasure of Archaeological Finds of the People's Republic of China, 1976-1984, Beijing, 1987, pl. 310; two in the Hakutsuru Museum of Art, Kobe, illustrated in Hakutsuru Eika [Selected Masterpieces of Hakutsuru Museum], Kobe, 1978, pls 32-33. Silver cups of this type have sold at auction, including one in these rooms, 29th February 1972, lot 168; another formerly in the David David-Weill and Arthur M. Sackler Collections, sold at Christie's New York, 1st December 1994, lot 65; and two from the Carl Kempe Collection, sold in our London rooms, 14th May 2008, lots 40 and 71. A gilt-bronze example formerly in the Cranbrook Academy of Art sold twice in these rooms, 5th May 1972, lot 444A, and 1st June 1977, lot 352.