elegantly potted, the slightly splayed foot swelling to high, rounded shoulders surmounted by a tall waisted neck molded with four raised rings and an everted galleried rim applied on each side with a molded florette, further florettes applied to the shoulder, surmounted by two curved double-strap handles applied with three studded bosses, terminating in dragon-head terminals biting the rim, covered overall with a finely crackled translucent glaze of pale yellowish tint stopping unevenly above the base to reveal the fine buff body, Japanese wood box (3).

Note: Vases of this elegant form, with full rounded shoulders, a tall ringed neck and a pair of sweeping handles in the form of sinuous dragons, illustrate the international spirit of the Tang dynasty. Known in Chinese as longbinghu 'dragon-handled jars', their form was inspired by silver and glass vases made in the Roman Empire and brought to China through the Silk Route. The Tang potters cleverly adapted Western forms to suit contemporary taste by modelling the handles in the form of dragons biting the vessel’s rim.

Examples of dragon-handled amphoras, both with white and amber-brown glazes, have been found in Gongyi city, Henan province, not far from the Gongyi kiln site, one of the foremost producers of Tang pottery. A reconstructed example, unearthed from a Tang dynasty tomb at Beiyaowan, near Gongyi, was included in the exhibition Ceramic Finds from Henan, University Museum and Art Gallery, Hong Kong, 1997, cat. no. 12.

A very similar amphora from the collection of Robert W. de Forest, now in the Newark Museum, was included in the exhibition Chinese Art from the Newark Museum, China Institute in America, New York, 1980, cat. no. 9; and another from the collection of Mr. and Mrs. Eugene Bernat was sold in these rooms, 7th November 1980, lot 54, and again at Christie’s New York, 4th June 1987, lot 156. the broad baluster body rising from a slightly splayed base to gently rounded shoulders surmounted by a waisted neck and everted rim, covered overall with a clear glaze over a white slip, stopping unevenly above the base to reveal the fine buff body, Japanese wood box (3).

Note: White-glazed jars of such large proportions are unusual, although a related example with cover, in the Idemitsu Museum of Arts, Tokyo, is illustrated in Chinese Ceramics in the Idemitsu Collection, Tokyo, 1987, pl. 23; another from the Meiyintang Collection is published in Regina Krahl, Chinese Ceramics in the Meiyintang Collection, vol. 1, London, 1994, pl. 228; and a slightly larger example from the Yang De Tang Collection was sold in these rooms, 17th March 2015, lot 51. 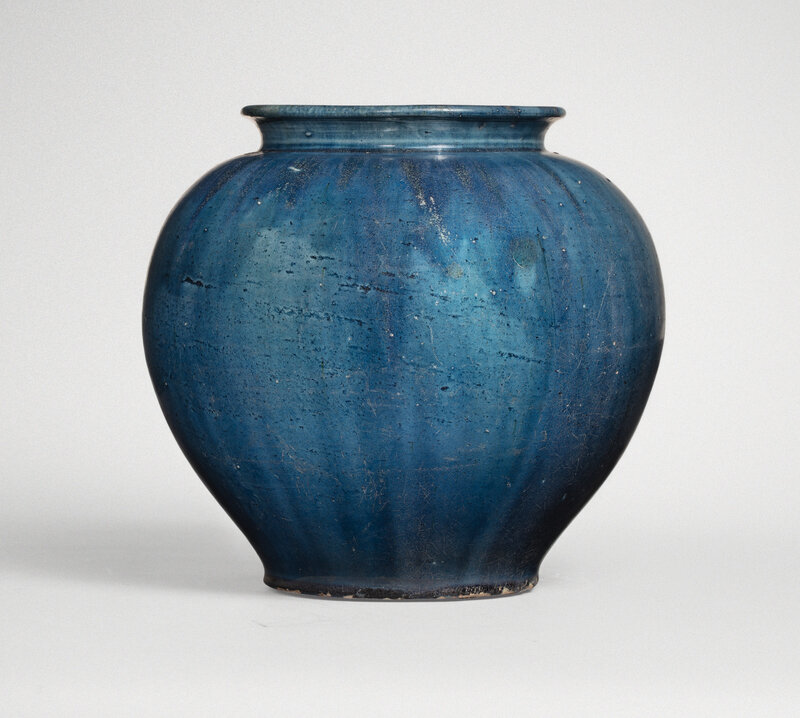 the broad-shouldered body rising from a short spreading foot to a waisted neck with a rolled everted rim, covered overall in a vibrant blue glaze, applied in layers and pooling to deep indigo tones, the glaze extending over the rim and foot, stopping unevenly on the base to reveal the pinkish-buff body, the interior applied with a transparent yellow-tinged glaze with three spur marks to the rim.

Note: Vessels covered entirely in cobalt blue were an innovation of the Tang dynasty that can be traced back to at least the 7th century. These wares were highly valued, as the cobalt used for making them is believed to have been imported.

A jar and cover of similar proportions, in the Meiyintang Collection, is illustrated in Regina Krahl, Chinese Ceramics from the Meiyintang Collection, vol. 3 (I), London, 2006, pl. 1294; one in the Gemeentemuseum, The Hague, is illustrated in Nigel Wood, Chinese Glazes, London, 1999, p. 204; another was sold in our London rooms, 23rd May 1972, lot 73; and a slightly smaller example from the Ataka Collection, in the Museum of Oriental Ceramics, Osaka, is published in Masterpieces of Chinese and Korean Ceramics in the Ataka Collection. China, Tokyo, 1980, pl. 52. See also a much larger blue-glazed jar and cover, from the collection of the National Trust at Ascott House, published in Margaret Medley, T’ang Pottery and Porcelain, London, 1981, p. 16. 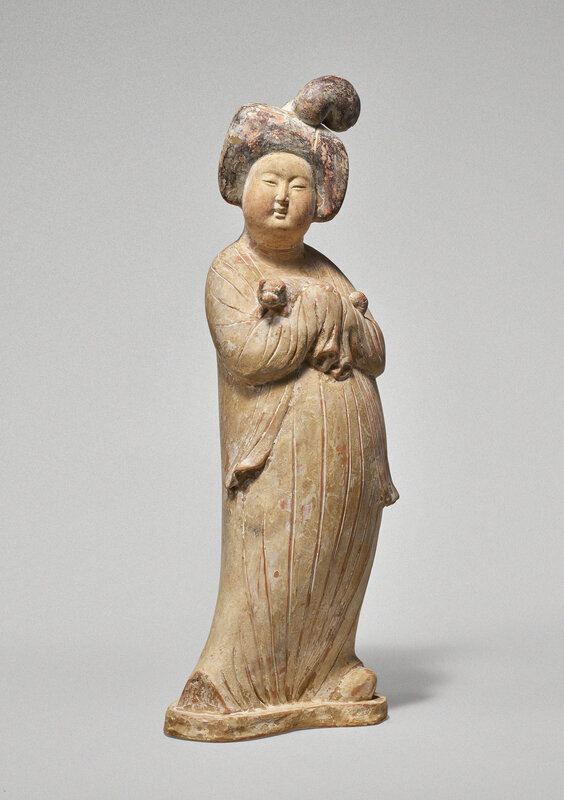 standing in an elegant swaying pose with hands raised cradling a dog naturalistically modeled with incised fur, wearing long, heavy robes falling in deep folds to the base, the fully rounded features framed by the long hair drawn into an elaborate coiffure arranged in a dramatic crescent face and an asymmetrical twisted top knot, with traces of pigment, wood stand, Japanese wood box (4).

Note: Sensitively fashioned with a plump face, small heart-shaped lips and the head slightly turned to one side, pottery figures with such voluptuous features are attributed to the first half of the 8th century, and in particular to the reign of Emperor Xuanzong (r. 712-756). The plump features of these figures, their long voluminous robes and flamboyant hairstyles are believed to be representative of the aesthetic trend led by the famous imperial concubine Yang Guifei (719-756), beloved consort of the Emperor. Her distinctive hairstyle, known as ‘duomaji’ 'falling off the horse bun', originated according to legend with the Emperor’s fascination with Yang Guifei’s appearance after she fell from a horse.

Ceramic figures of ladies-in-waiting holding small dogs are comparatively rare; a closely related example, possibly the pair to this piece, is illustrated in Sekai tōji zenshū/Ceramic Art of the World, vol. 11, Tokyo, 1976, col. pl. 29. See also a pottery figure of a lady holding a dog, but with hands exposed, in the collection of Julius Eberhardt, illustrated in Regina Krahl, Frühe Chinesische Kunst/Early Chinese Art, Hong Kong, 1999, vol. 1, pl. 130; and another with a different coiffure, from the collection of David W. Dewey, published in Celestial Horses and Long Sleeve Dancers, Minneapolis, 2013, p. 180 (right). the finely potted globular body with steeply rounded sides rising from a flat circular base to an incurved canted rim, the shoulder set with two knopped lug handles, the handles and the upper body applied with green, amber and ivory glazes forming a textile-inspired pattern of vertical bands and floret medallions over a white slip, the rim applied with an amber glaze with a pale amber glaze to the interior, lacquered wood cover and Japanese wood box (4).

Note: Sancai-glazed jars of this form are more commonly known of smaller size, such as a jar sold in these rooms, 4th June 1985, lot 93; and another sold in our Los Angeles rooms, 31st May 1978, lot 1285. See also a smaller jar of this form decorated only with florets, in the Palace Museum, Beijing, illustrated in The Complete Collection of Treasures in the Palace Museum. Porcelain of the Jin and Tang Dynasties, Hong Kong, 1996, pl. 206; another with lozenges, from the Yang De Tang Collection, included in the exhibition Chinese Ceramics of Eight Dynasties, National Museum of History, Beijing, Taipei, 1987, p. 22 (top), and sold at Christie’s Hong Kong, 6th October 2015, lot 88; and a jar with splashes sold in our Hong Kong rooms, 11th May 1983, lot 18.

A fragment of a jar of this form and similarly decorated with florets divided by vertical lines was recovered at the Gongxian kiln site at Huangye in Gongyi, Henan province, and is illustrated in Three-Colour Glazed Pottery Kilns of the Tang Dynastyat Huangye, Beijing, 2000, col. pl. 58.4, together with a reconstructed example with splashes, col. pl. 20.2.