the ovoid baluster body rising from a countersunk base to a broad sloping shoulder surmounted by a tall flaring neck and everted mouth rim, applied overall with a glossy brownish-black glaze liberally flecked with small irregular russet 'partridge-feather' mottles concentrated at the shoulder and extending down the body, the glaze thinning to a pale mushroom color along the rim, stopping irregularly above the foot to reveal the pale buff-colored body, Japanese wood box (3).

Note: This vase is remarkable for the captivating pattern of small irregular splashes covering its shoulders, creating a dramatic contrast against the lustrous black glaze. While black-glazed wares were made in large quantities in most kilns in northern China, the elegant form and delicate russet splashes on this piece are comparable to some of the finest examples of this type.

The spontaneous splashes applied on this piece are often referred to as ‘partridge-feather mottles’, or zhegu ban, a term mentioned in various texts from the mid-10th century onwards. In the catalogue for the exhibition Hare’s Fur, Tortoiseshell, and Partridge Feathers. Chinese Brown- and Black-Glazed Ceramics, 400-1400, Harvard University Art Museums, Cambridge, 1995, p. 139, Robert Mowry notes that these irregular splashes were probably inspired by black-glazed wares with fine splashes made at Ding and Cizhou-type kilns. Compare for example a Ding conical bowl, from the Arthur M. Sackler Museum, Harvard University Art Museums, Cambridge, included in ibid., cat. no. 16.

A closely related vase in the British Museum, London, is published in R.L. Hobson, A Guide to the Pottery & Porcelain of the Far East, London, 1924, pl. 32; another in the Cleveland Museum of Art, accession no. 1940.51; and one of more elongated form, in the Art Institute of Chicago, included in Hare’s Fur, Tortoise Shell, and Partridge Feathers, op cit., cat. no. 35. See also a jar of this form but with a pattern of russet florets, from the Yang De Tang Collection, sold in these rooms, 17th March 2015, pl. 77. the ovoid tapering body rising to broad rounded shoulders surmounted by a short double-ringed mouth, freely painted in iron-oxide with an abstract design of two birds in flight reserved on a brownish-black glaze, the glaze stopping neatly above the foot ring to reveal the buff body, the countersunk base unglazed, Japanese wood box (3).

Note: Jars of this type are characterized by their freely painted designs, at times so succinctly executed that they tend towards abstraction. With a brush dipped in an iron-rich slip, the present vase was painted with three birds in flight, their wings and plumage rendered with short calligraphic strokes fired to a vibrant russet tone.

A jar of similar proportions and painted with birds, in the collection of Robert M. Ferris, was included in the exhibition Hare’s Fur, Tortoiseshell, and Partridge Feathers. Chinese Brown-and Black-Glazed Ceramics, 400-1400, Harvard University Art Museums, Cambridge, 1995, cat. no. 52; a slightly smaller one in the Meiyintang Collection, is published in Regina Krahl, Chinese Ceramics from the Meiyintang Collection, vol. 1, London, 1994, pl. 465; and a third was sold in these rooms, 7th February 1974, lot 154. raised on a splayed foot, the steeply rounded sides incurving towards the wide mouth, covered overall in an ivory-colored glaze cut away leaving a broad chevron register enclosing demi-florettes alternating with foliate petals, with a narrow band of overlapping petals above, between single line borders, the footrim unglazed and burnt reddish-brown in the firing, lacquered wood cover, two Japanese wood boxes (6).

Note: Deep rounded bowls, such as the present example, are one of the most iconic forms produced at the Cizhou kilns during the Northern Song and Jin periods. Several bowls of this form were excavated from the Guantai kilns, Cixian, Hebei province, and the form is found applied with a plain white glaze and with a variety of sgraffiato techniques, including incised designs on a wave ground, designs painted and incised through a dark slip and designs both incised and cut away, as with the current example. Four Cizhou bowls of this form decorated in different techniques are illustrated in Mayuyama, Seventy Years, Tokyo, 1976, pls 548-551.

The designs found on deep bowls of this type decorated with in sgraffiato techniques largely incorporate geometric, cloud and foliate bands. Compare one incised with a cloud scroll against a wave ground from the Field Museum of Natural History, Chicago, illustrated in Freedom of Clay and Brush through Seven Centuries in Northern China: Tz’u-chou Type Wares, 960-1600 A.D., Indianapolis Museum of Art, Indianapolis, 1980, cat. no. 35, where a selection of related bowls is illustrated, ibid, p. 95, figs 81, 83-85.

The present design of triangular lappets below a scroll ground can also be compared with a brown-slip decorated sgraffiatojar, included in the exhibition Sekai Toji Zenshu/Ceramic Art of the World Song-Liao, vol. 10, Tokyo, 1955, cat. no. 101 and sold as part of the Linyushanren Collection at Christie’s New York, 13th September 2018, lot 827. well potted, with deep gently rounded sides rising from a straight narrow foot ring, carved around the exterior with two rows of overlapping stiff lotus lappets, the interior finely incised with a central medallion enclosing a pair of fish swimming amidst combed waves, the tactile ivory-white glaze pooling in characteristic 'teardrops' and stopping neatly at the foot ring, the rim bound in metal, Japanese wood box (3).

Note: Ding bowls carved with this auspicious motif of fish swimming in water were popular in the Northern Song dynasty. Examples of this elegant deep shape are however unusual, and only one related example appears to have been published: a slightly larger bowl sold in our Hong Kong rooms, 24th November 1981, lot 31. See also a bowl carved with fish on the interior and with petals on the exterior, but of conical form, in the National Palace Museum, Taipei, included in the Museum’s Special Exhibition of Ting Ware White Porcelain, Taipei, 1987, cat. no. 47.

A bowl of this type but with a dragon on the interior, from the Kempe Collection, in the Museum of Far Eastern Antiquities, Stockholm, is illustrated in Oriental Ceramics. The World’s Great Collections, Tokyo, 1982, vol. 8, pl. 107; and another with lotus, from the collection of J.H. Oppenheim, now in the British Museum, London, is published ibid., 1981, vol. 5, pl. 57. 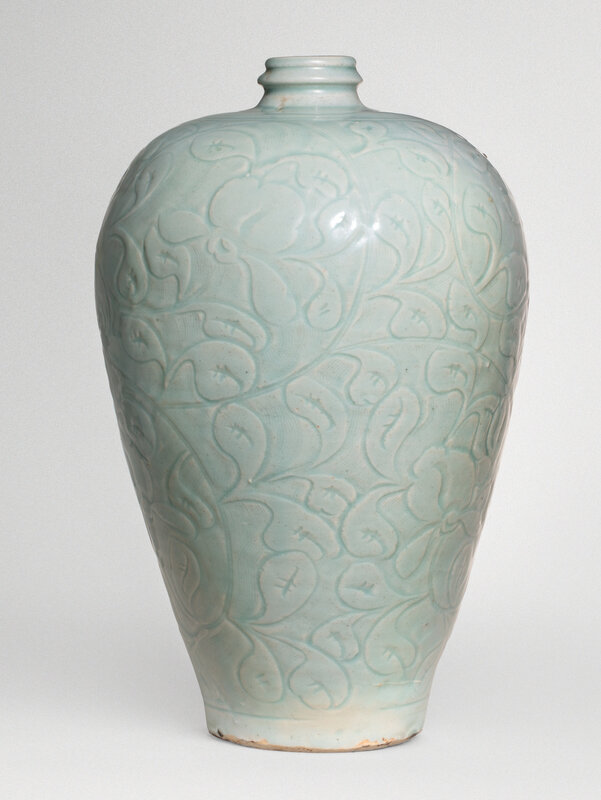 well potted, the ovoid body rising from a narrow tapered foot to a broad rounded shoulder surmounted by a short ribbed neck narrowing to a lipped rim, the body freely carved with a luxuriant floral scroll of long undulating foliate stems bearing large lotus heads, all on a finely combed ground, enclosed within incised concentric double-line borders at the foot and shoulder, covered overall with a pale bluish glaze, pooling in the carved recesses and stopping neatly at the foot ring to reveal the pale white body, Japanese wood box (3).

Note: This vase is remarkable for its brilliant translucent glaze, thinly applied over a luxuriant peony scroll and a finely combed ground. It is rare to find qingbai meiping of such large proportions, and those carved with this peony design are particularly unusual.

A vase of similar proportions, but carved with a composite floral scroll, was included in the exhibition Qingbai Wares of the Song Dynasty, Museum of Oriental Ceramics, Osaka, 1994, cat. no. 39; another, unearthed from a Southern Song dynasty hoard at Suining, Sichuan province, was included in the exhibition Fūin sareta Nansō tōji ten/Newly Discovered Southern Song Ceramics: A Thirteenth-Century “Time Capsule”, Odakyū Art Museum, Tokyo, 1998, cat. no. 61; one with lotus, in the Art Institute of Chicago, is illustrated in Sekai tōji zenshū / Ceramic Art of the World, vol. 12, Tokyo, 1977, pl. 167, together with a meiping in the Tokyo National Museum, pl. 314.

Meiping of this type are also known of smaller size: one in the Sichuan Provincial Museum, Chengdu, is illustrated in Zhongguo ciqi quanji [The complete works of Chinese ceramics], vol. 8, Shanghai, 1999, pl. 179; and another with a peony scroll, in the Victoria & Albert Museum, London, is illustrated in Stacey Pierson, Qingbai Ware: Chinese Porcelain of the Song and Yuan Dynasties, London, 2002, pl. 85.