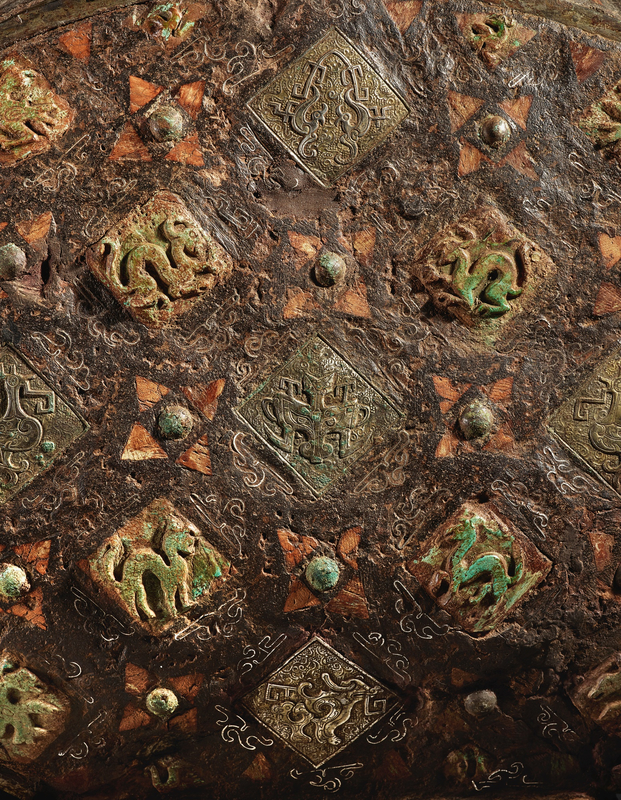 the flattened oval body sumptuously inset on each side with five registers of gilt-silver and turquoise plaques enclosing various mythical creatures and animals, each plaque surrounded by four detached scrolls inlaid in fine silver wires, separated by raised gilt-silver bosses each encircled by quatrefoil bone inlay, all within gilt-silver-bound edges, the shoulders set with a pair of gilt-bronze mythical beast masks suspending loose rings and similarly decorated with vertically arranged turquoise animal plaques, between raised bosses surrounded by bone inlay and triangular turquoise inlay carved with small raised circles, all bordered with detached silver scrolls, the cylindrical neck encircled by a row of raised gilt-bronze florets, between a band of further raised bosses and bone inlay and triangular turquoise inlay with raised circles, the rectangular foot and circular mouth secured by a broad gilt-bronze band. 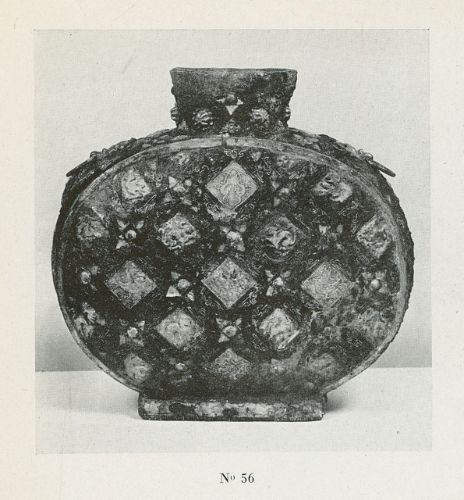 Note: This flamboyant flask, which appears to be unique, is a work of historical importance. It is an exceptional artifact in a previously unrecorded combination of materials, and documents the expertise and courage to experiment of late Warring States craftsmen. The decorative appeal of this vessel and related contemporary bronzes suggest that metal vessels were transformed from objects of ritual importance to items of pure luxury. This vessel highlights the artisans’ search for new ways to appeal to the tastes of the elites at the various contending courts of the time, whose interest in luxury items was gradually moving away from bronze towards more colorful objects made of painted lacquer. While the design of the present vessel is representative of the period, it is unique in its employment of new materials and inventive ways of adding color to its surface.

The use of iron as material for a vessel is highly unusual in itself and very few iron vessels of this early period appear to be preserved. Unlike most civilizations, China is considered hardly to have had an Iron Age as such (i.e. an age where tools and weapons were predominantly made of iron), although particularly from the Warring States to the early Western Han period (roughly 500 – 100 BC), iron was much in use for weapons and armor, tools and other small implements – but also alongside bronze. It was a material of prestige and is found particularly in the context of persons of high rank. Some of the most luxurious weapons of the period are swords discovered in Baoji, Shaanxi province, with iron blades and intricate openwork cast gold hilts inlaid with turquoise. Iron vessels, however, particularly with inlaid decoration, appear to be virtually non-existent.

In Science and Civilisation in China, vol. 5: Chemistry and Chemical Technology, part 11: Ferrous Metallurgy, Cambridge, 2008, Donald B. Wagner highlights particularly the States of Qin, Chu and Wu as important states of iron metallurgy, but in this context illustrates only two vessels, a plain ding made of bronze, but with iron legs, p. 123, fig. 55, and a plain iron fu, p.125, fig. 58: 2. The present piece is remarkable for its elaborate design, which combines different media in a highly ornate and eccentric manner. Turquoise, gilt silver, silver, gilt bronze and bone are inlaid to form a complex geometric pattern, signalling unequivocally its owner’s wealth and high social status.

It is in this period that the decreasing power of the Zhou kings, together with innovative agricultural technology, allowed feudal states to become wealthier and more powerful. Sophisticated and luxuriously inlaid bronzes were recovered from tombs in Jincun, the site of the Eastern Capital at Luoyang, as well as from burial sites unrelated to the Zhou kings, including the tombs of the Wei ruling nobles in Huixian, Henan, the tombs of the Zhongshan kings at Pingcheng, Henan province, and tombs of the Chu state in Hubei province. A bronze hu reportedly from Jincun, lavishly inlaid with glass lozenges separated by diagonal bands with intricate gold inlay, designated ‘Important Cultural Property’, formerly in the collection of Baron Hosokawa and now in the Eisei Bunko, Tokyo, is illustrated in Zhongguo meishu quanji. Qingtongqi, Beijing, 1991, vol. 2, pl. 107; a bronze fanghu from the collection of Adolphe Stoclet, also with glass inlay between diagonal bands with silver inlay and gold bosses, was included in the International Exhibition of Chinese Art, Royal Academy of Arts, London, 1935, cat. no. 406 (Fig. 1), and another related glass-inlaid gilt and silvered bronze hu recovered from the tomb of prince Liu Sheng of the Western Han dynasty in Mancheng, Hebei province, is illustrated in Out of China’s Earth. Archaeological Discoveries in the People’s Republic of China, London, 1981, pl. 191. With lozenge-shaped plaques divided by diagonal bands and with bosses in the center of quatrefoil florets at the intersections, the design of the present bianhu is stylistically closely related to these lavishly inlaid bronze vessels. 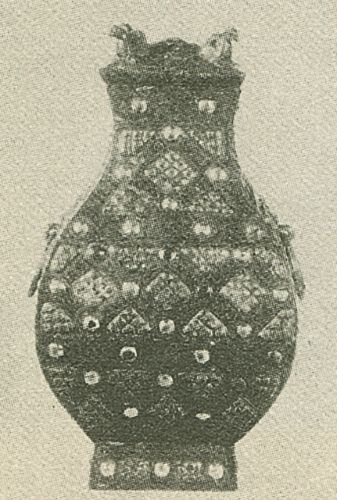 A bronze fanghu from the collection of Adolphe Stoclet illustrated in the International Exhibition of Chinese Art, Royal Academy of Arts, London, 1935, cat. no. 406.

It is also in this period that the present form, with a flattened ovoid body and a square foot, gained popularity in various media, and some bronze bianhu are also inlaid with precious metals; see, for example, a flask in the Freer Gallery of Art, Smithsonian Institutions, Washington D.C., with a geometric pattern of diagonal angular scrollwork inlaid in silver, illustrated in The Freer Chinese Bronzes, Washington, 1967, vol. 1, pl. 95.  The present vessel, however, appears to be unique not only in its use of iron as the basic material, but also its combination of silver, gilt bronze and bone for its inlays. It testifies to a period when craftsmen were not only highly skilled, but also dared to move into new directions, perhaps under the patronage of some regional court.