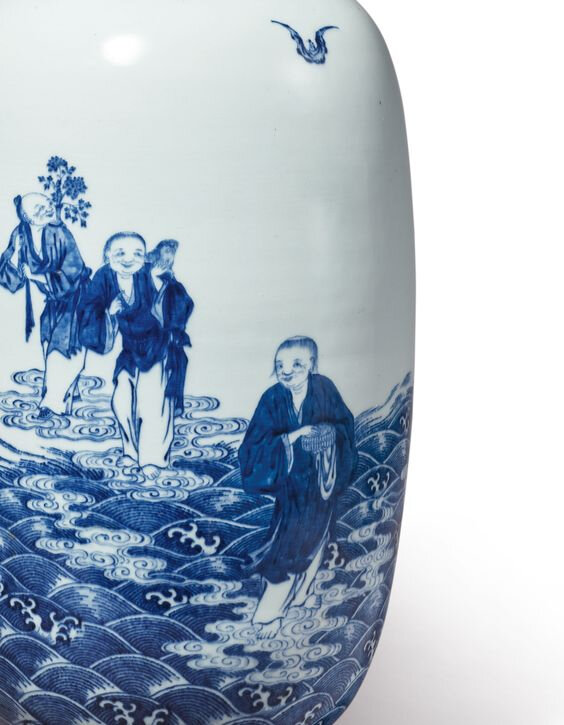 the tall ovoid body rising from a straight foot to rounded shoulders and an everted rim, the exterior of the vessel finely painted in brilliant varying tones of cobalt blue with the Eight Daoist Immortals holding their respective attributes and standing on stylized swirling clouds above frothing waves encircling the base, with Shoulao atop a crane in flight in the sky above, the base with a six-character seal mark in underglaze blue.

Note: This large and impressive vase illustrates the Eight Daoist Immortals as they cross the rough seas, each rendered striking a different posture and identifiable by their attributes, such as Li Tieguai releasing bats from a double gourd. The ethereal scene is replete with auspicious symbols of health, wealth and happiness, suggesting that it may have been commissioned for a birthday celebration of the Qianlong Emperor or the Empress. A variation of this auspicious subject matter is seen on a Qianlong mark and period blue and white double gourd vase which, according to the Imperial archives, was commissioned for the birthday celebration of the Dowager Empress in the 34th year of the Qianlong reign (1769), illustrated in The Complete Collection of Treasures of the Palace Museum. Blue and White Porcelain with Underglazed Red, vol. 3, Shanghai, 2000, pl. 128. A large and impressive blue and white hu-form 'Daoist Immortals' vase painted in a similar manner, sold in our Hong Kong rooms, 26th November 1980, lot 270 and again on 5th October 2016, lot 3607. The subject of the Eight Daoist Immortals is also found in enameled porcelains of the Qianlong period, including a pink-ground famille-rose jar, sold in the same rooms, 6th April 2016, lot 3611 and a pair of larger jars and covers, sold twice at Christie’s Hong Kong in 1992 and 1995, and again in the present rooms, 17th March 2009, lot 124, from the collection of Gordon Getty. A famille-rose lantern-shaped vase, of similar profile to the present lot, and painted with the same subject was sold in our Hong Kong rooms, 9th November 1982, lot 302.

The unusual form of this piece appears to be a modified version of the cylindrical and rouleau vases made popular during the Kangxi reign; the straight lines of their predecessors have been replaced with a fuller body. Two blue and white lantern-shape vases of variations of this form and painted with animals and mythical beasts, in the Palace Museum, Beijing, are illustrated in ibid., pls 134-135. Compare also an example decorated with deer and pine trees from the Wang Xing Lou Collection, included in the exhibition Imperial Perfection. Chinese Palace Porcelain of Three Great Emperors, Minneapolis Institute of Arts, Minneapolis, 2004, cat. no. 27; and another with a Qianlong seal mark and of the period, decorated with deer in a landscape, sold at Christie's London, 9th December 1985, lot 124.