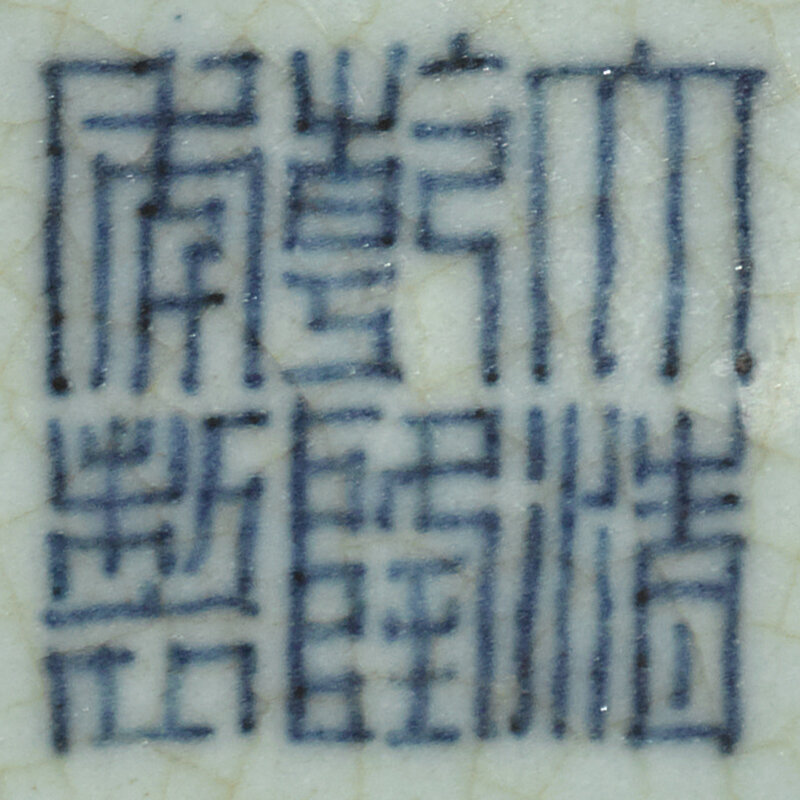 elegantly potted with a compressed globular body sweeping up to a tall cylindrical neck with a straight mouth, all supported on a short splayed foot, covered overall in a thick pale blue-gray glaze suffused throughout with a fine network of craquelure, the foot dressed in a brown wash faithfully imitating Song dynasty Ru ware, the base inscribed in underglaze blue with a six-character seal mark.

Note: The Qianlong Emperor is famous for his fondness for Imperial stonewares of the Song dynasty (960-1279). He not only collected them but also commissioned new porcelain with similar glaze from the Imperial kilns for his appreciation. Under his reign, glazes imitating Jun, Ding, guan, Ge and Ru wares, the five 'official' wares of the Song dynasty, were created to cover a range of carefully selected forms like in the present piece. The high level of skill in 'recreating' every aspect of Song ware is evidenced in the foot which has been left unglazed and stained dark brown to imitate the prototype.

While a profusion of new shapes for porcelain vases was already developed in the Yongzheng period, in the Qianlong reign the number of variations multiplied. Geng Baochang, Ming Qing ciqi jianding [Appraisal of Ming and Qing porcelain], Hong Kong, 1993, pp. 259 and 263 publishes over twenty related forms of bottle vases with pear-shaped or globular body and tall slender neck, which often vary only minimally in profile.

Aside from the present example, two other pear-shaped vases of Qianlong mark and period with Ru or guan-type glazes are in the Zande Lou Collection, both included in the Shanghai Museum exhibition, Qing Imperial Monochromes: The Zande Lou Collection, Hong Kong, 2005, cat. no. 28, with the neck more waisted, and cat. no. 33, with a more cylindrical neck. The present shape, with a more depressed body, is otherwise very rare. Compare a closely related vase sold at Christie's Hong Kong, 25th October 1993, lot 804. Another vase of this type with a waisted neck from the collection of the British Rail Pension Fund was sold in our London rooms, 16th May 1989, lot 48; and also a smaller vase from the J. M. Hu Collection was sold in our Hong Kong rooms, 9th October 2012, lot 111.