NEW YORK, NY.- Bonhams announced highlights of its upcoming sale of New York Jewels on September 26, featuring exceptional diamonds and colored stones, an array of both antique and modern jewelry, together with signed pieces by the great houses such as Van Cleef & Arpels, Cartier, and Tiffany & Co. The sale comprises 144 lots with estimates ranging from $3,000 up to $1.2 million. A highlight exhibition tour will start at Bonhams Los Angeles on September 6-9, then to Bonhams Hong Kong on September 16-18 by appointment only, leading up to the full exhibition at Bonhams New York starting September 21 at noon.

Highlighting the sale is a rare and impressive fancy colored diamond and diamond ring by Van Cleef & Arpels from a private collection (estimate: $800,000-1,200,000). Graded Fancy Intense Blue, VVS2 and weighing 2.17 carats, this emerald cut diamond is accented by round brilliant-cut diamonds. 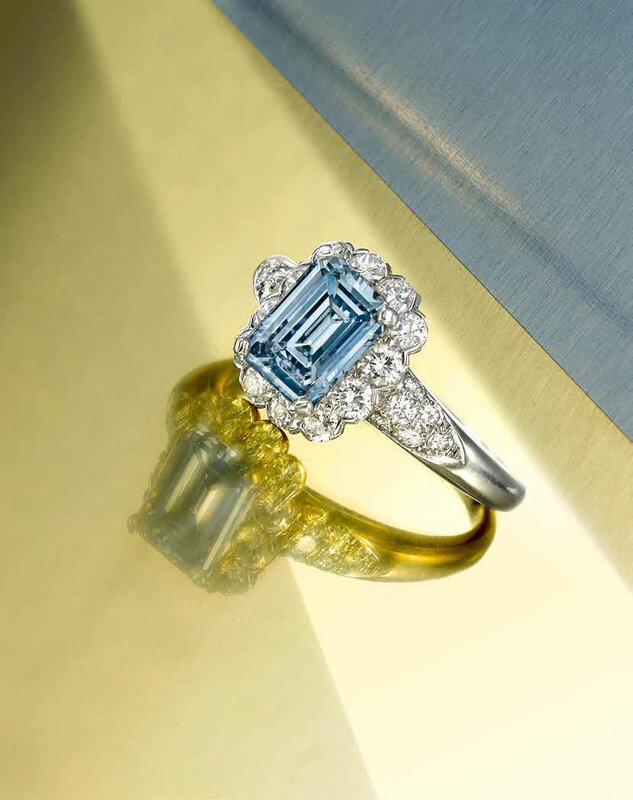 Brett O’Connor, Bonhams Senior International Jewelry Director, comments: “We are excited to present a curated selection of wearable jewelry that speaks to the taste of every collector. The sale comprises rare diamonds to fine Art Deco creations from a number of private collections, including the Estate of Joseph Schildkraut, a German silent film actor.”

The Van Cleef & Arpels section of the sale comprises of 14 lots and captures the spectrum of design of this great jewelry house, including a very fine emerald-cut Fancy Vivid Yellow diamond ring, weighing 6.09 carats; an impressive and fine carved emerald, pearl and diamond necklace; an attractive oval-shaped Burma sapphire ring weighing approximately 21.56 carats; and an iconic 18k gold and ruby butterfly brooch, circa 1940. 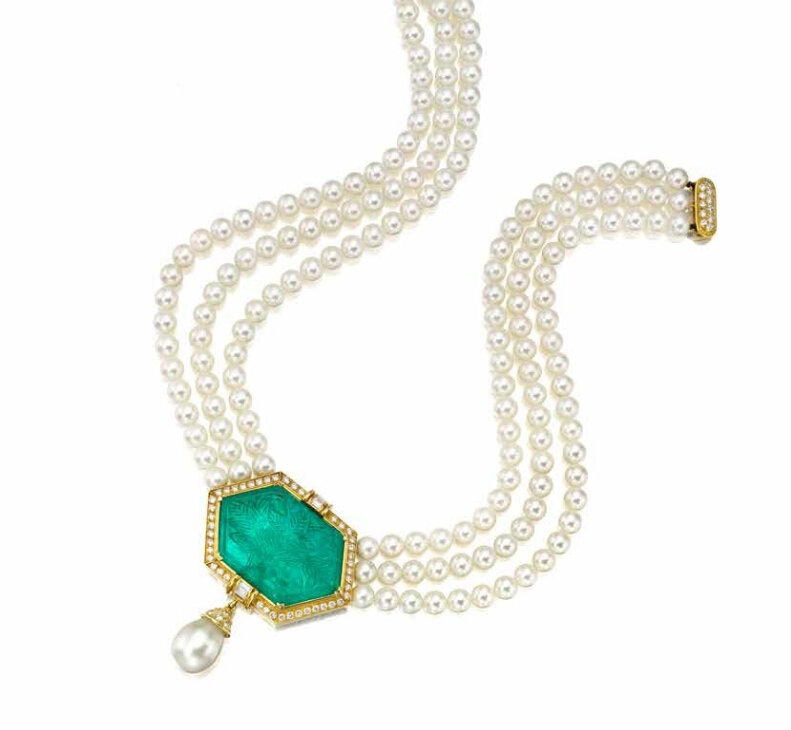 Accompanied by a letter from Van Cleef & Arpels, dated May 18, 2011, stating the sapphire ring, with the engraved number NY32440-1, is not in the original condition; however at the time of writing is considered Van Cleef & Arpels. Note: To view an original drawing of the piece, dated 1937, please see the Van Cleef & Arpels website, under 'Signature Butterflies'.

Fashion and jewelry in the 1940s was influenced by the privations of World War II. Materials were restricted, so most jewelry was created from gold and small or reused stones, and forms were often restrained. Van Cleef & Arpels found exuberance in designs such as the ballerina, fairy, and butterfly that have become icons of the firm and are still made in modern ways today. The creative use of scoring in the polished gold on this butterfly brooch is a subtle and clever use of the material, as is the body created of graduated ruby segments. Jewelry in the 1940s needed to be versatile, and this exquisite brooch would be equally at home on suit jacket, sweater, or on the shoulder of an evening gown. ART DECO
Highlighting the Art Deco section includes a very fine diamond, emerald and onyx bracelet, circa 1925, and two lots from the Estate of Joseph Schildkraut, a successful German silent film actor. The first lot is an elegant gentleman’s smoking set decorated with diamonds, circa 1925, comprising of a black lacquer lighter and cigarette case signed Cartier NY, and an onyx cigarette holder still containing an original monogrammed cigarette. His father Rudolph, also a silent screen film star, chose this set for Joseph to mark the opening of Grauman's Chinese Theater in Hollywood on May 18, 1927. The second lot is a diamond and enameled open face pocket watch made by Cartier circa 1925, also monogrammed with Joseph’s initials. Property from the Estate of Joseph Schildkraut. Property from the Estate of Joseph Schildkraut.

Note: Cartier began offering smoking requisites in the 1860s including matchboxes and cigarette holders, but the most fantastic designs appeared on the open expanse provided by cigarette cases that could be accompanied by matching lighters. At the turn of the century, these designs were often Russian in inspiration, with guilloche design, or carved from hardstone. By the 1920s, the impact of the technological and social changes of World War I influenced the design of both jewelry and objects. Gone were the swags, festoons, and heavy decoration of earlier eras replaced by an austere geometry-based vision that came to be known as Art Deco design.

In the 1920s Cartier produced astonishing works of jewelry design featuring the finest stones and materials, but they also produced fashionable objects to appeal to a broader range of consumers. Louis Cartier was savvy, and recognized the increase in the popularity of smoking that occurred after WWI and the company produced a fantastic array of smoking accouterments. Louis Cartier said, "We must make it our business to build up our inventory that responds to the mood of the public by producing articles which have a useful function but which are also decorated in the Cartier style." This remarkable elegant smoker's set and pocket watch features a sleek expanse of black accented with diamonds. The black and white palette is quintessential Art Deco design, as is the elegant monogram that is neatly tucked into a lozenge shape and provides a subtle sparkle of diamonds. Rudolph Schildkraut, a German silent film actor, chose this set for his son, Joseph Schildkraut, who was a Hollywood star, to mark the opening of Grauman's Chinese Theater in Hollywood on May 18, 1927. The two Schildkrauts were appearing together in the movie that premiered that night, Cecile B. DeMille's The King of Kings. This was one of the most spectacular openings in movie history and thousands of people lined Hollywood Boulevard to catch a glimpse of the stars. Joseph went on to win an Oscar for his performance in the Life of Emile Zola (1937) and he was nominated for a Golden Globe for his performance as Otto Frank in The Diary of Anne Frank (1959). He also won an Emmy in 1962 and he has a star on the Hollywood Walk or Fame. This unusual set, elegant in it's simplicity, unites the glamour of the Golden Age of Film and the best of Art Deco design.