NEW YORK, NY.- Sotheby's opened its September Asia Week sales series with three dedicated auctions that together totaled an exceptional $16.4 million, outpacing their overall high estimate of $12.4 million. Led by the sale of Chinese Art from the Metropolitan Museum of Art: The Florence and Herbert Irving Gift that more than doubled expectations, a strong 81.6% of lots offered today were sold, driven in large part by competition by bidders from around the world.

Angela McAteer, Sotheby’s Head of Chinese Works of Art Department in New York, commented: “We are thrilled with the tremendous results from today’s opening Asia Week sales, which were incredibly robust across a variety of artistic styles, media, and historical eras. We also saw strong participation internationally, with enthusiastic bidding from across the Asia region, including Mainland China and Hong Kong, as well as the US and all over the world. The Florence and Herbert Irving sale for the Met had a remarkably strong sell-through rate, and the works on offer represented some of the most exceptional examples of Chinese jade carvings to come to market in years. We are so pleased to have partnered with an institution as revered as the Met to support an endowment for future Asian art holdings.”

The day began with an outstanding offering of 120+ Chinese works of art originally gifted by philanthropists and renowned Asian art collectors Florence and Herbert Irving to The Metropolitan Museum of Art in New York. The auction achieved $8.3 million – more than double its high estimate of $3.8 million – with an exceptional 91.3% of all lots sold. The Met’s full proceeds from the sale will go into an Irving acquisition fund, to be used by the institution’s Department of Asian Art to continue the Irving legacy by seeking out artworks to further enhance the comprehensive nature of the institution’s holdings of Asian art.

A further selection of 200+ objects from the Irving Gift will be offered in the Saturday at Sotheby’s: Asian Art auction on 14 September.

The auction was led by A Massive Spinach-Green Jade ‘Dragon’ Washer, which fetched $1.3 million – more than eight times its high estimate of $150,000. Hewn from a massive jade boulder and carved to the exterior with powerful dragons writhing through swirling clouds and turbulent seas, the present washer can trace its form to an immense jade basin made 1265 and given to Khubilai Khan. The basin, sometimes referred to as the ‘Du Mountain washer’ or as a wine pot, is the earliest known jade carving of this monumental scale. It is carved from a single block of dark blackish-green jade, and measures approximately half a meter deep and up to 182 cm wide. The sale also featured A White and Apple-Green Jadeite ‘Landscape’ Table Screen that achieved $1.1 million – more than eight times its high estimate of $120,000. Striking for the brilliant green tone of the stone from which it was fashioned, the present work appears to be the pair to a table screen in the collections of R.C. Bruce, H.M. Queen Marie of Yugoslavia, and Sir John Woolf. The natural striations and subtle variations in the stone’s color, which were cleverly incorporated into the design of both screens to depict rippling water, appear to match. 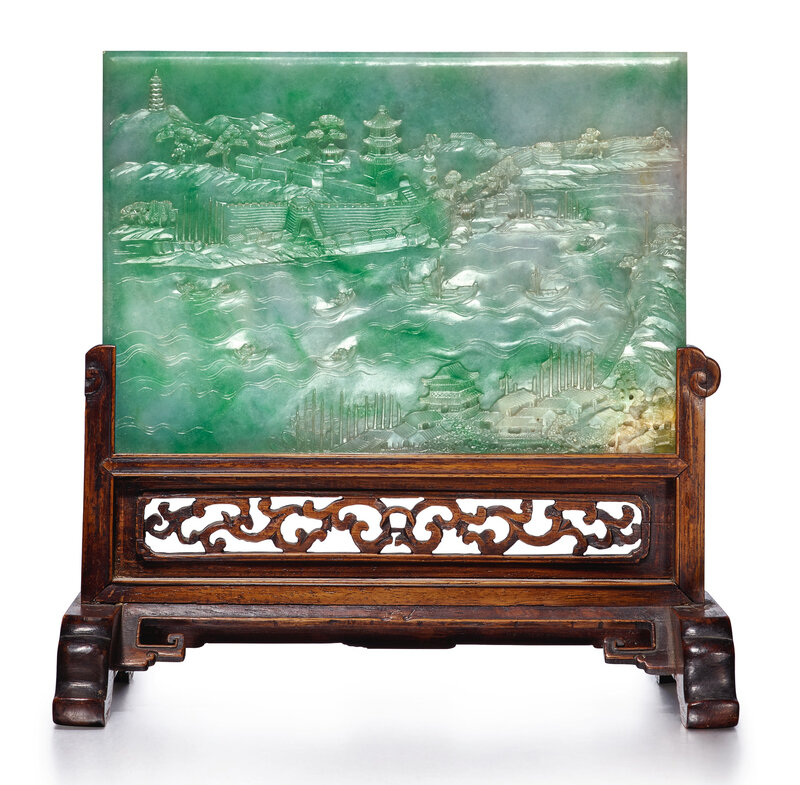 In March 2015, The Met announced the gift of 1,275 Asian works of art from Florence and Herbert Irving – a donation that fundamentally transformed the holdings of the museum’s Department of Asian Art, on the occasion of its centennial. At the time of their gift, the Irvings realized that a full assessment of their collection would take time, and that there would undoubtedly be many pieces that would unnecessarily duplicate works already in the collection. For that reason, they agreed that The Met could sell any of the works in their gift so long as the proceeds would go towards future acquisitions. The present sale is a fulfillment of that visionary goal.

Following the success of Junkunc: Arts of Ancient China in March 2019, this season’s selection of ancient Chinese art from the renowned collection of Stephen Junkunc III achieved $4.6 million, surpassing the auction’s $3.5 million high estimate. Together with our dedicated offering this spring, works from the Junkunc Collection have raised nearly $9 million at Sotheby’s in 2019.

The offering of weapons, jade animals, gilt-bronzes and inlaid fittings was led by An Exceptional and Rare Beige and Brown Jade Camel from the Tang dynasty, which achieved $620,000 – more than double its $300,000 high estimate. more than double its $300,000 high estimate. Exquisitely rendered in a lifelike manner, the present figure belongs to a select group of jade camels portrayed in this particular curled pose. Traditionally linked with the Tang dynasty and the Silk Road routes, camels are more commonly portrayed in ceramic as majestic figures carrying foreigners or loaded with precious goods. Naturally, they were associated with luxury and with the exotic, thus conferring status and wealth to their owners. A selection of works of Buddhist art spanning the Northern and Southern dynasties to the Qing dynasty closed Day 1 of our Asia Week sales, totaling $3.5 million. The auction was led by A Gilt-Bronze Figure of Avalokiteshvara Padmapani from the Yongle Mark and Period that fetched $620,000 (estimate $500/700,000). Considered to be a pinnacle of Chinese Buddhist bronze sculpture, early 15th century imperial gilt bronzes can be traced to the Yuan dynasty, when the court espoused Tibetan Buddhism. Although the imperial standards are evident from figure to figure, there is variety and originality found in Yongle sculpture. Many bronze figures of Avalokiteshvara are distinctly different from one another, while remaining faithful to standard stylistic requirements of the Yongle ateliers. 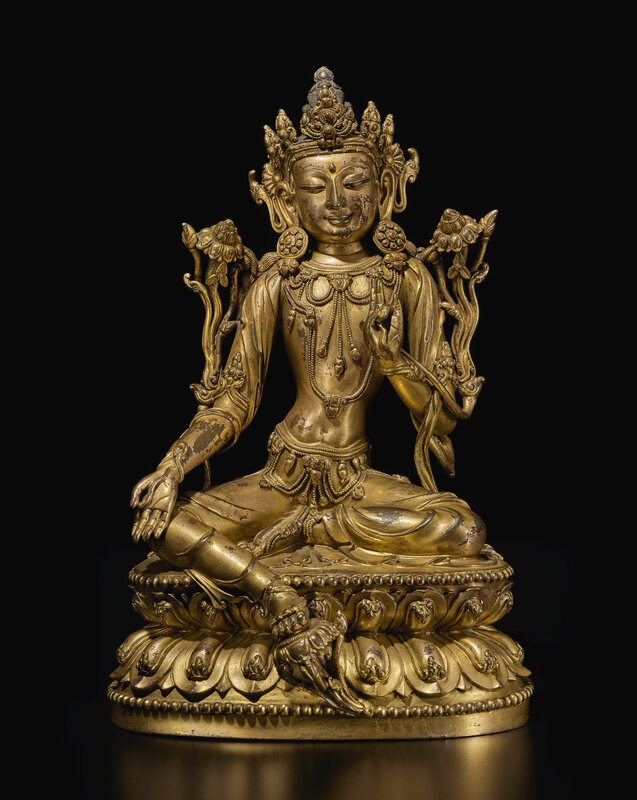 exquisitely cast, seated in lalitasana with the proper right leg slightly extended and supported by a blossoming lotus, two further blossoms with buds flanking each shoulder and connected to the outwardly-facing hands in vitarka and varada mudras by long, curving stems, the regal deity crowned with an elaborate diadem encircling a high topknot and set above a broad, tranquil face, the ears and body adorned with ornate jewelry, a celestial sash wrapping around the shoulders and arms, the waist sensuously defined above a low-slung dhoti, all raised on a double-lotus with scrolled embellishments to the petals, a horizontal six-character mark inscribed to the front of the base, retaining consecratory materials including miniature sutra scrolls.

Note: Early 15th century imperial gilt bronzes are considered by many to be a pinnacle of Chinese Buddhist bronze sculpture. Their origins can be traced to the Yuan dynasty, when the court espoused Tibetan Buddhism. Early 14th century woodblocks made for the monastery of Yangshen Yuan, Hangzhou, are evidence of a new style appearing in Chinese Buddhist art; see Heather Karmay, Early Sino-Tibetan Art, Warminster, 1975, pp. 47-50, pls 26, 29 and 30. The gently smiling faces, full rounded figures and tiered thrones in these woodblock prints reflect the Newar styles favored in Tibet, introduced into China by Nepalese artists such as Aniko. These illustrations could almost have been used as templates for Yongle period bronzes, such as the Speelman enthroned Buddha, sold in our Hong Kong rooms 7th October 2006, lot 808, and the similar example in the British Museum, illustrated in Craig Clunas and Jessica Harrison-Hall, Ming: 50 Years that Changed China, The British Museum, London, 2014. fig. 195.

Although the imperial standards are evident from figure to figure, there is yet variety and originality found in Yongle sculpture. Many of the bronze figures of Avalokiteshvara are markedly different from one another whilst remaining faithful to standard stylistic requirements of the Yongle ateliers. The present figure has a more sinicized face, compared to the face of a Yongle mark and period Avalokiteshvara Padmapani from the Belgian collection of J.P.H.Y., illustrated in Jan Van Alphen, Cast for Eternity, Antwerp, 2004, cat. no. 78. The Belgian figure is flanked by straight lotus stems, has Newari-inspired facial features, and a lotus base with narrower petals. David Weldon suggests that it was worshipped in Tibet, as indicated by the blue pigment applied to the hair in local custom, Van Alphen, op. cit., p. 222. Similar broad petals are seen on another related Yongle mark and period Avalokiteshvara, sold at Christie's New York, 24th March 2004, lot 82, cast with facial features even more sinicized than those of the present figure. Yet another Yongle interpretation of this deity is seen in a mark and period figure from the Speelman Collection, sold in our Hong Kong rooms 7th October 2006, lot 807, with the hands set in different mudras, and with an additional foliate border encircling the lotus base. Despite their differences, all are finished and gilded to perfection, with the Yongle period hallmark sensuous casting of the body and style of adornment.

The wider petal style of the present figure's base is seen in Yongle mark and period bronzes of grander proportions, such as the Speelman and British Museum figures of Buddha, while the narrower petal base appears to be more often used for examples of smaller format. Other Yongle mark and period figures closely related to the present include one from the collection of Soame Jenyns, sold at Christie's London, 6th November 2018, lot 26, another sold in our Hong Kong rooms, 7th May 2002, lot 647, and another in the Chang Foundation collection, illustrated in Jintongfo zaoxiang tulu/Buddhist Images in Gilt Metal, Taipei, 1993, pl. 50