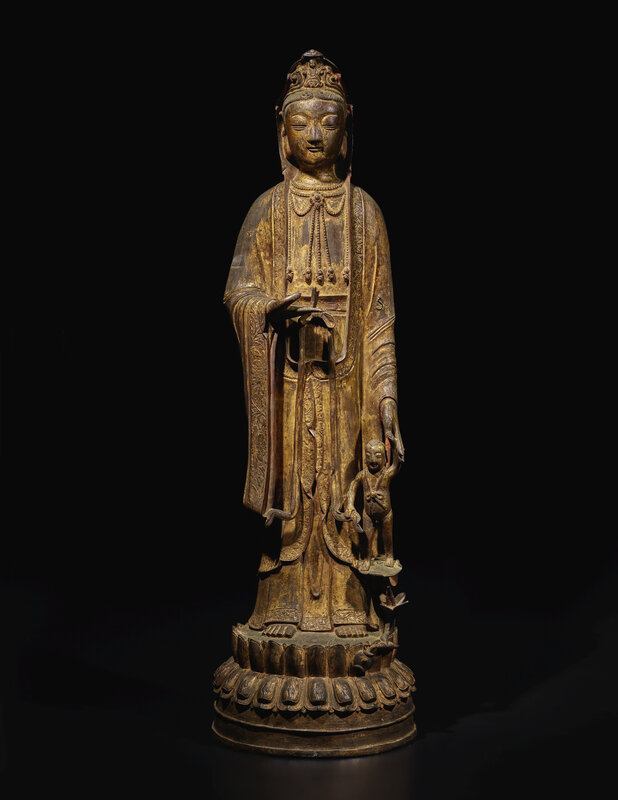 the maternal emanation of the bodhisattva adorned in a long cowl sheltering the Amitabha crown above a neatly coiled and combed coiffure, the small, round face of the principal figure with hooded eyes and peaceful gaze, a tiered necklace framed by the open cowl with a floral-pattered hem in relief, the dhoti ribbon-secured at the waist and falling in loose folds over the bare feet, a small figure of a youth standing upon a lotus leaf, grasping the deity's lowered proper left hand and the tail of a ribbon, all supported by a circular base with four Daoist emblems incised on the front of the platform, encircled by two layers of lotus lappets.

Note: With the rise in practitioners’ worship, images of Avalokiteshvara increased significantly during the Tang dynasty, strictly portraying the bodhisattva as a male, and often with a mustache. Avalokiteshvara was occasionally portrayed with the youth Sudhana (a figure mentioned in the Avatamsaka Sutra; for further discussion see lot 322) however the maternal, feminine form of the deity with a young child did not appear until the 11th century. The portrayal of the deity continued in both male and female forms until the late Ming dynasty, when the feminine form became prevalent. Songzi Guanyin, Avalokiteshvara with a child, likely first appeared at this time. As discussed by Chelsea Foxwell in ''Merciful Mother Kannon’ and Its Audiences', The Art Bulletin, vol. 92, no. 4, December 2010, p. 330, it is possible that the 'Avalokiteshvara with a child' iconography was inspired by images of the Madonna and Child, introduced to China by Jesuit missionaries circa 1600. Ceramic groups of the Christian subject also appear in Kangxi period Dehua kiln production, supporting this hypothesis. The inclusion of Daoist emblems on the present figure's base further points to a fluidity and inclusiveness in Chinese folk religion.

The concept of the child-granting Avalokiteshvara originates in the Pumen Pin chapter of the Lotus Sutra, often reproduced as a standalone sutra and recited in order to invoke the deity directly. The sutra states that Avalokiteshvara will grant devout practitioners a handsome son or a virtuous daughter, among other wishes.

A 1609 woodblock print of White-Robed Avalokiteshvara holding a son, in the collection of the C. V. Starr East Asian library at Columbia University, is reproduced by Foxwell, ibid., fig. 5. See also a painting attributed to the Ming dynasty, late 16th century, depicting Guanyin holding a young boy, preserved in the Metropolitan Museum of Art, New York, acc. no. 1989.152. Compare the present figure with two seated gilt-bronze figures of Avalokiteshvara with a child, both attributed to the Ming dynasty and with similar features, and treatment of the ornaments and garments, sold in our London rooms, the first on 15th April, 1983, lot 108, the other on 2nd November, 1984, lot 341.