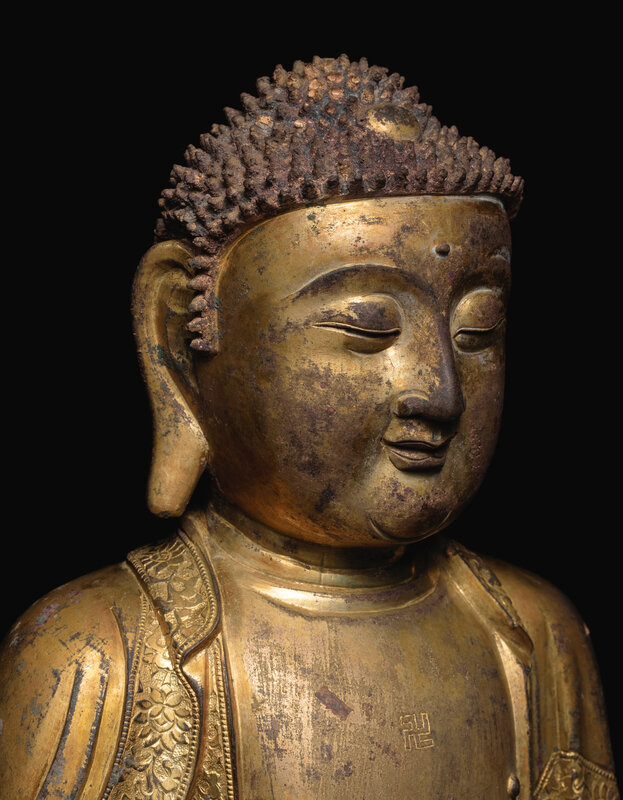 cast seated in vajraparyankasana, the upturned soles of the feet each inscribed with a four-spoked dharmacakra, the hands in dhyana mudra, the dhoti sashed at the waist and the hems of the garments delicately chased with a brocade pattern of scrolling lotus, the exposed chest centered with a wan, the bowed head with a serene expression, downcast eyes, elongated ears, and tightly coiled hair, the ushnisha surmounted by a round jewel.

Note: The present figure depicts Amitabha, also known as the Buddha of Infinite Light, and the Western Buddha of the Five Tathagatas. In most depictions, the deity is seated cross-legged with his hands on the lap in the meditation pose, as seen in the present figure, with thumbs and fingers touching. This classic representation of the most worshiped Buddha is undoubtedly the most iconic of Chinese Buddhist images.

Popular among followers in China as one of the most compassionate figures in Buddhism, Amitabha is believed to reside in Sukhavati, the Pure and Happy Land, a Buddhist paradise in the West. Meher McArthur, in Reading Buddhist Art, London, 2002, p. 39, notes that ‘according to the Sutra of the Pure and Happy Land, all mortals can be reborn in the Pure Land if they worship Amitabha’. This salvation aspect of Amitabha originates from a vow made while still a bodhisattva to save all beings if he himself could attain enlightenment.