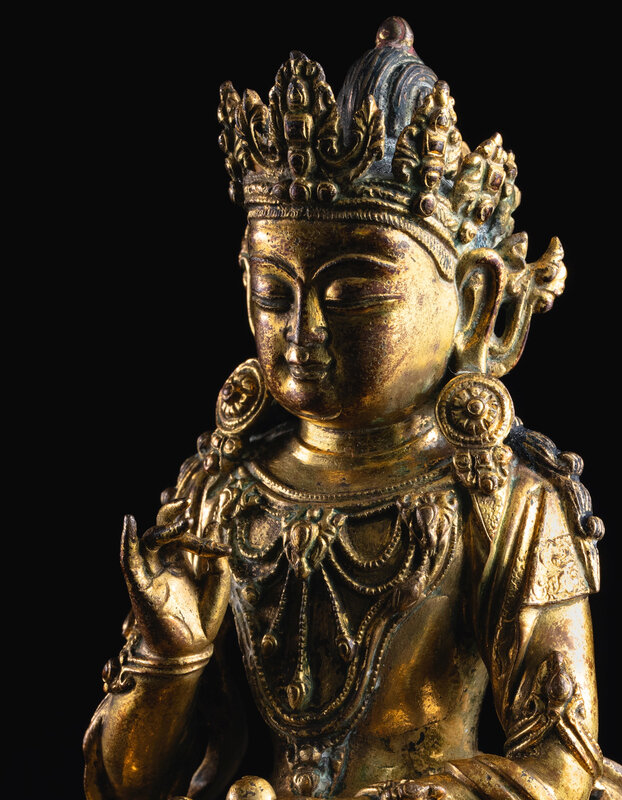 the seated bodhisattva finely cast in vajraparyankasana with the lowered proper left hand cradling a cinatamani pearl, the opposite hand in vitarka mudra, an elaborate diadem encircling a coiled topknot and crowning the broad, rounded face with gently arched brows framing a serene, downcast gaze, the princely figure adorned in heavy earrings, a tiered necklace, and highly wrought girdle, relief-cast borders of lotus and stippled ground decorating the billowing sash and dhoti, the latter arrayed in neat folds about the legs, all raised on a double-lotus base flanked by pendent sashes, sealed with a copper plate inscribed with a vishvavajra.

Note: The present figure, beautifully detailed, features many attributes commonly seen in 15th century gilt-bronze Buddhist figures. The modeling of the face, crown, and jewelry bear similarities with other period examples, however the torso is more solidly cast, with a slightly more truncated mid-section than seen with Yongle and Xuande examples, a feature more associated with later figures. Compare a figure of Simhanada Lokeshvara, attributed to the mid-15th century, illustrated in Robert R. Bigler and Béla Kelényi, Art and Faith at the Crossroads: Tibeto-Chinese Buddhist Images and Ritual Implements from the 12th to the 15th Century, Zurich, 2013, cat. no. 37. Compare also a related figure of Avalokiteshvara, of larger size, sold in our Hong Kong rooms, 15th November 1989, lot 588, attributed to the Ming period. Lot 590 of the same sale is a Yongle mark and period gilt-bronze Maitreya figure, and the elongation and sway of the torso in this earlier figure, compared to that of the present, is also evident.

Ksitigarbha, or Dizangwang in Mandarin, is one of the four most popular bodhisattvas in Chinese Buddhism, alongside Avalokiteshvara, Samantabhadra, and Manjushri. Each deity is believed to reside on one of the four sacred mountains, Jiuhuashan being the residence of Ksitigarbha. The Kstigarbha Sutra is thought to have been translated into Chinese from its original Sanskrit during the Tang dynasty, and the first Chinese images of the deity originate in this period. The quantity of images at Dunhuang, as well as surviving bronzes, show an early appreciation for the bodhisattva. Ksitigarbha is often shown with a five-point crown, a cintamani pearl, and a khakara staff.

The sutra of Ksitigarbha explains that the deity was born a Brahmin maiden during mortal life. Her mother committed wrongful acts and when she died, the maiden was afraid for her mother’s fate in the afterlife. She prayed fervently to Buddha. Once during deep meditation, she passed through the gates of an underworld. There she learned that her mother had been pulled out from the depths and saved, thanks to the daughter's efforts and offerings. The maiden was so moved by the plight of the wretched souls she saw in the hellish underworld that she vowed to save them all. Manjushri then declared that the maiden was Ksitigarbha bodhisattva, a savior of lost souls.