NEW YORK, NY.- Sotheby’s bi-annual Asia Week sale series in New York concluded this weekend, with 900+ works sold for a total of $37.4 million – exceeding the series’ high estimate of $33.7 million. Comprising works across seven auctions and spanning 4,000 years of history, Asia Week was highlighted by an exceptional selection of Chinese Art originally gifted from Florence and Herbert Irving to the Metropolitan Museum of Art, and a magnificent handscroll in cursive script by Zhu Yunming, which achieved $1.6 million and was the top selling lot of the week. Below is a summary of the exceptional art and collections that drove these results.

Angela McAteer, Sotheby’s Head of Chinese Works of Art Department in New York, commented: “We are very pleased with the results of this season’s Asia Weeks auctions. Overall, works emerging from well-known and provenanced collections captured the attention and enthusiasm of the market, and we saw incredibly robust bidding on Chinese art on offer from the Metropolitan Museum of Art, ancient art from the esteemed collection of Stephen Junkunc III, and works from a Pennsylvania cultural Institution.

CHINESE ART FROM THE METROPOLITAN MUSEUM OF ART:
THE FLORENCE AND HERBERT IRVING GIFT
Auction Total: $8.3 Million
The seasonal auctions of Important Chinese Works of Art opened with a series of dedicated sales, beginning with an outstanding offering of 120+ Chinese works of art originally gifted by philanthropists and renowned Asian art collectors Florence and Herbert Irving to The Metropolitan Museum of Art in New York. The auction achieved $8.3 million – more than double its high estimate of $3.8 million – with an exceptional 91.3% of all lots sold. The Met’s full proceeds from the sale will go into an Irving acquisition fund, to be used by the institution’s Department of Asian Art to continue the Irving legacy by seeking out artworks to further enhance the comprehensive nature of the institution’s holdings of Asian art.

The auction was led by A Massive Spinach-Green Jade ‘Dragon’ Washer, which fetched $1.3 million – more than eight times its high estimate of $150,000. Hewn from a massive jade boulder and carved to the exterior with powerful dragons writhing through swirling clouds and turbulent seas, the present washer can trace its form to an immense jade basin made 1265 and given to Khubilai Khan. The basin, sometimes referred to as the ‘Du Mountain washer’ or as a wine pot, is the earliest known jade carving of this monumental scale. It is carved from a single block of dark blackish-green jade, and measures approximately half a meter deep and up to 182 cm wide. In March 2015, The Met announced the gift of 1,275 Asian works of art from Florence and Herbert Irving – a donation that fundamentally transformed the holdings of the museum’s Department of Asian Art, on the occasion of its centennial. At the time of their gift, the Irvings realized that a full assessment of their collection would take time, and that there would undoubtedly be many pieces that would unnecessarily duplicate works already in the collection. For that reason, they agreed that The Met could sell any of the works in their gift so long as the proceeds would go towards future acquisitions. The present sale is a fulfillment of that visionary goal.

JUNKUNC: ARTS OF ANCIENT CHINA II
Auction Total: $4.6 Million
Following the success of Junkunc: Arts of Ancient China in March 2019, this season’s dedicated auction of ancient Chinese art from the renowned collection of Stephen Junkunc III achieved $4.6 million, surpassing the auction’s $3.5 million high estimate. Works from the Junkunc Collection have raised over $11 million at Sotheby’s in 2019, and over $22.3 million total across our 2018 and 2019 Asia Week auctions.

The offering of weapons, jade animals, gilt-bronzes and inlaid fittings was led by An Exceptional and Rare Beige and Brown Jade Camel from the Tang dynasty, which achieved $620,000 – more than double its $300,000 high estimate. Exquisitely rendered in a lifelike manner, the present figure belongs to a select group of jade camels portrayed in this particular curled pose. Traditionally linked with the Tang dynasty and the Silk Road routes, camels are more commonly portrayed in ceramic as majestic figures carrying foreigners or loaded with precious goods. Naturally, they were associated with luxury and with the exotic, thus conferring status and wealth to their owners. 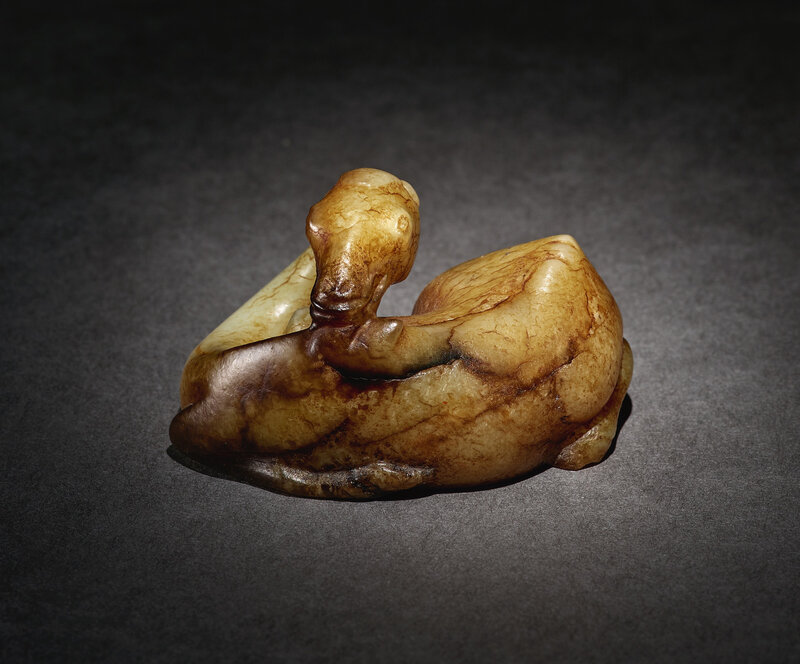 BODIES OF INFINITE LIGHT
FEATURING AN IMPORTANT COLLECTION OF BUDDHIST FIGURES
FORMERLY IN THE COLLECTION OF THE CHANG FOUNDATION
Auction Total: $3.5 Million
A selection of works of Buddhist art spanning the Northern and Southern dynasties to the Qing dynasty closed Day 1 of our Asia Week sales, totaling $3.5 million. The auction was led by a Yongle Mark and Period Gilt-Bronze Figure of Avalokiteshvara Padmapani that fetched $620,000 (estimate $500/700,000). Considered to be a pinnacle of Chinese Buddhist bronze sculpture, early 15th century imperial gilt bronzes can be traced to the Yuan dynasty, when the court espoused Tibetan Buddhism. A NOBLE PURSUIT:
IMPORTANT CHINESE AND KOREAN ART FROM A JAPANESE PRIVATE COLLECTION
Auction Total: $2 Million
A selection of important Chinese and Korean art from a Japanese private collection opened our second day of Asia Week sales, totaling $2 million, and surpassing the auction’s $1.7 million high estimate. The offering was led by a Hongzhi Mark and Period Fine and Rare Green-Enameled ‘Dragon’ Dish which fetched $275,000 – over three times its $80,000 high estimate. Dishes decorated with sinuous dragons enameled in green against a white ground originated in the Chenghua period (1465-1487), but increased in popularity in the succeeding Hongzhi (1488-1505) and Zhengde (1506-1521) reigns. While Chenghua prototypes are also known with the dragons enameled over the glaze, later examples, such as the present dish, were almost all enameled over the biscuit.

A group of porcelain from the reigns of three emperors collected by highly esteemed lawyer, oil entrepreneur and author John Milton Bonham and on offer from a Pennsylvania cultural institution highlighted the sale, led by A Large and Extremely Rare Blue and White ‘Immortals’ Vase that achieved $1.4 million – more than four times its $300,000 high estimate. Illustrating the Eight Daoist Immortals as they cross the rough seas, the ethereal scene on the present vase is replete with auspicious symbols of health, wealth and happiness, suggesting that it may have been commissioned for a birthday celebration of the Qianlong Emperor or the Empress.

FINE CLASSICAL CHINESE PAINTINGS & CALLIGRAPHY
Auction Total: $3.5 Million
Thursday’s auction of Fine Classical Chinese Paintings & Calligraphy was led by Zhu Yunming’s Ode to the Goddess of the Luo River in Cursive Script that fetched $1.6 million - surpassing its $1.2 million high estimate. One of the most critical calligraphers from the Ming dynasty, Zhu Yunming wrote down this classic lyric poem as a gift to his close friend Xie Yong. The present magnificent handscroll exhibits the classical beauty of Zhu’s cursive scripts. SATURDAY AT SOTHEBY’S:
ASIAN ART FEATURING CHINESE ART FROM THE METROPOLITAN MUSEUM OF ART - THE FLORENCE AND HERBERT IRVING GIFT
Auction Total: $5.2 Million
Asia Week auctions concluded this weekend with Saturday at Sotheby’s, totaling $5.2 million and well-exceeding the auction’s $3 million high estimate. totaling $5.2 million and well-exceeding the $3 million high estimate. The sale was highlighted by an additional 200+ objects from the Irving Gift, which together brought $2.8 million with an exceptional 98.5% of works sold. The group was led by An Yixing Compressed Teapot and Cover signed Mei Ruchuan that soared to achieve $150,000 (estimate $5/7,000). the base with a signed inscription, dated to the first year of Hongguang, corresponding to 1645 (2).