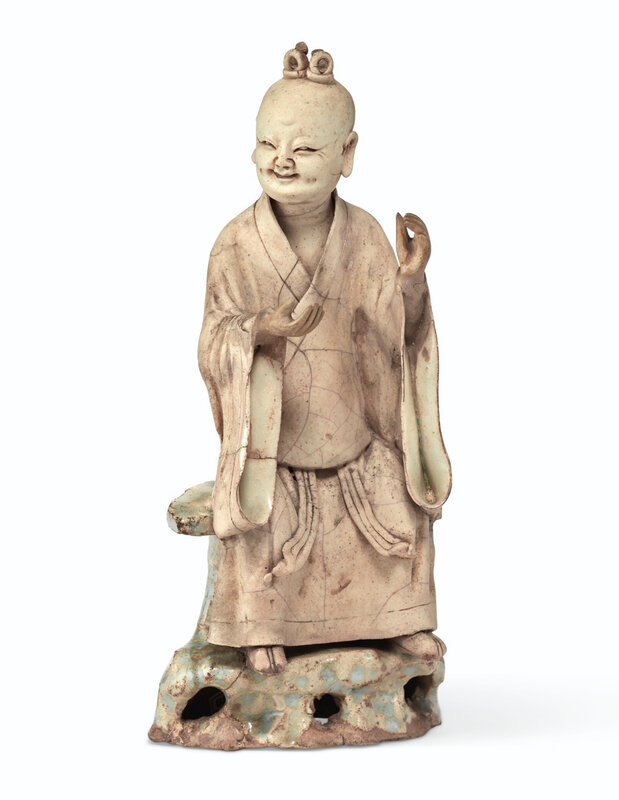 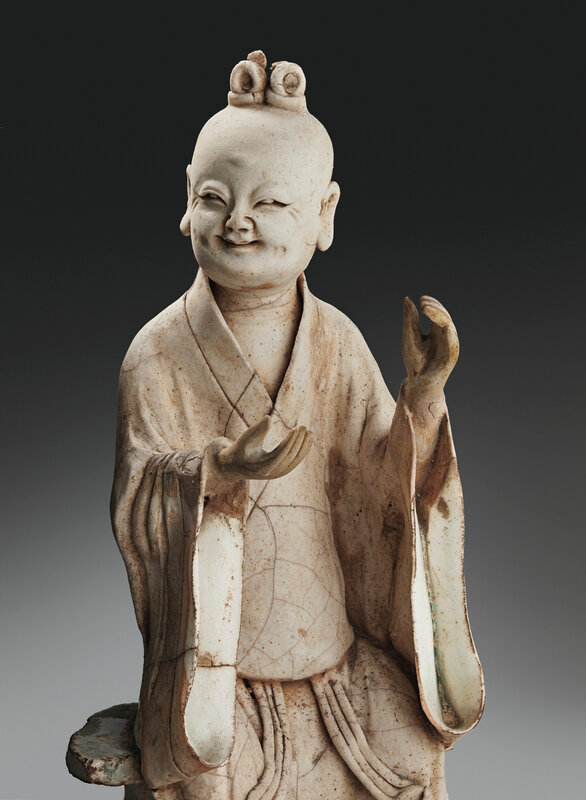 The finely modeled sage is shown smiling and wearing a belted robe and cord-tied shoes, seated on top of a pierced rock stool with his hair worn in two small topknots on top of his head, the stool and interior of the sleeves covered with a transparent pale blue glaze, the remainder of the figure left in the biscuit.

Note: This beautifully modeled figure of a benevolently smiling Daoist sage belongs to a small group of rare Buddhist and Daoist figures made at the Jingdezhen kilns in the Song dynasty. Most of the published figures preserved in Chinese collections represent the bodhisattva Guanyin. This Daoist figure is thus especially rare. A very similar Daoist figure also seated on top of a glazed pierced rock stool, with the body and robe of the figure left in the biscuit, was excavated from a Southern Song tomb which is dated to the 4th year of Xianxiang (1268) in Panyang county of Jiangxi province and is now in Jiangxi Provincial Museum and illustrated by Zhang Bai in Complete Collection of Ceramic Art Unearthed in China - 14 - Jiangxi, Beijing, 2008, no. 70.

A qingbai figure of a seated Guanyin was unearthed in 1964 from the crypt of a Jin dynasty pagoda at Fengtai, Beijing, and is now in the Capital Museum. The figure is mainly biscuit-fired, with, like the present figure, only the edges of the robe covered with a qingbai glaze. Remains of pigment can be seen on the biscuit-fired areas, as can be noted in the illustration in Beijing Relics, Beijing, 1990, p. 75, no. 114. Another seated Guanyin, this one with her outer robe and her rocky pedestal (similar to that of the present figure) covered in qingbai glaze, was excavated from a Song dynasty well in Changzhou City, Jiangsu province in 1978. This figure, which has been dated to the Southern Song period, is illustrated in Gems of China's Cultural Relics, Beijing, 1997, no. 16.

A fourth figure of this type, also a seated Guanyin, is now in the Shanghai Museum, and is illustrated in Zhongguo Taoci Quanji, 16, Song Yuan Qingbaici, Shanghai, 1984, no. 76. This figure still has pigment adhering to the unglazed areas, and also bears an inscription dating it to the 11th year of the Shunyu reign of the Southern Song dynasty, equivalent to AD 1251. In addition, there is an exceptionally rare and beautiful qingbai seated Guanyin from the Yiqingge Collection with the outer robe covered with a characteristic pale blue glaze, reserving the head and upper body in the biscuit, and also dated to Southern Song Dynasty, sold at Christie's Hong Kong, 1 June 2011, lot 3726.