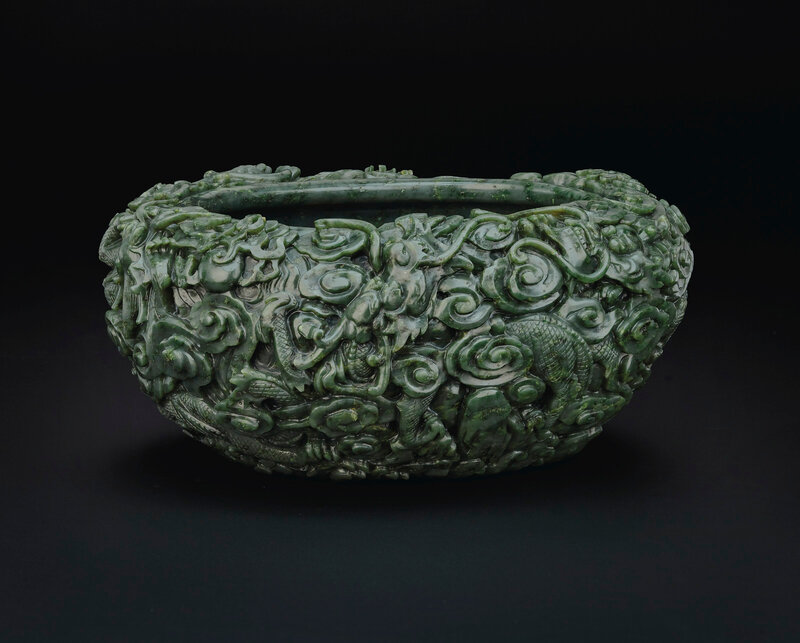 The washer of oval section rises from a flat base to an inverted rim. The exterior is carved in high relief with five dragons chasing flaming pearls amidst dense clouds above rocks and crashing waves rising from the whorl-carved base. The semi-translucent stone is of mottled spinach-green tone with some black inclusions.

Provenance: Richard Salisbury (1924-1995) Collection and thence by descent within the family.

Note: The craftmanship of the present washer, carved in high relief with a complex pattern of dragons, writhing and partially emerging out of dense clouds, is particularly successful. The interior of the vessel is well-hollowed while the thick, gently rounded sides are carved in high relief on the exterior with great depth created by the multiple layers of clouds. It is interesting to note that the artist utilized the natural shape of the original boulder, which would have been of considerable size.

The most notable aspect of the present washer is the treatment of the swirling wave that forms the flat base of the vessel. The earliest example of this form of wave-base on jades is a massive wine basin measuring 493 cm. across the body, carved in shallow relief with mythical sea creatures on the exterior, known as the Dushan dayuhai, the 'Du Mountain Wine Sea'. This basin was believed to have been commissioned by Khubilai Khan, who placed it in the Guanghan Palace on the Hill of Myriad Years, located on an island in Beihai Lake, Beijing. The motif evolved into the Ming dynasty, and can be found on jade vessels such as a celadon jade basin from the Hartman collection, illustrated by R. Kleiner in Chinese Jades from the Collection of Alan and Simone Hartman, Hong Kong, 1996, no. 45. In the Qing dynasty the same combination of the deeply-carved dragon and cloud motif above the swirled wave base, can be found in both white and spinach-green jade. See a white jade example from the collection of Lady Lever illustrated by S.C. Nott in Chinese Jade, London, 1937, pl. CI, and spinach-green jade version from the Kangxi period sold at Christie’s Hong Kong, 29 May 2007, lot 1401.