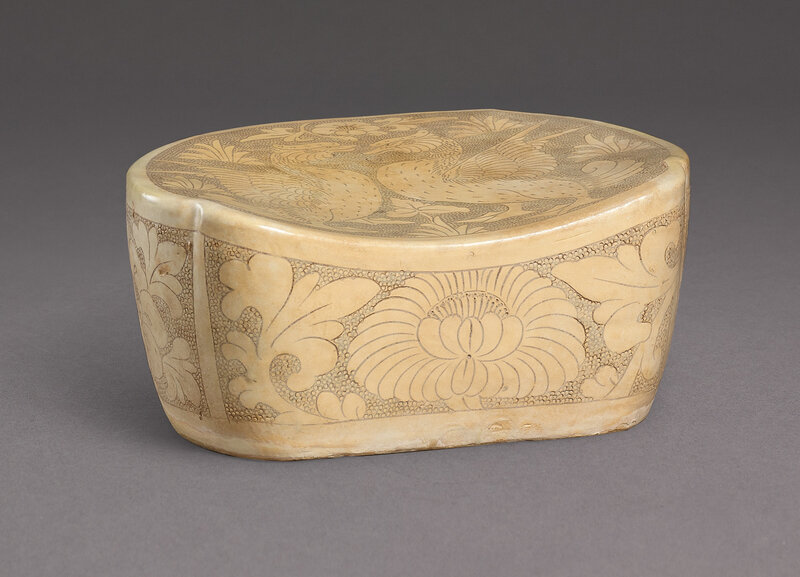 of bean shape with four subtle notches along its outer edge, the slightly concave top incised through the white slip with a lobed panel enclosing a pair of confronting mythical birds, each rendered standing on its webbed feet and detailed with fine plumage, surrounded by floral and foliate motifs and reserved on a stamped 'fish-roe' ground, each of the five lobed sides similarly incised through the slip with a large floral bloom surrounded by foliage against a circled ground, an airhole pierced to the back, covered overall with a clear glaze stopping short of the flat unglazed base.

Note: A pillow of this form incised with confronting ducks was included in the exhibition Chinese Ceramic Pillows from Yeung Wing Tak Collection, Museum of Oriental Ceramics, Osaka, 1984, cat. no. 16; and one with confronted deer, in the Victoria and Albert Museum, London, is illustrated in Rose Kerr, Song Dynasty Ceramics, London, 2004, pl. 61. See also two pillows decorated with a single bird included in the exhibition Charm of Black and White Ware. Transition of Cizhou Type Wares, Osaka Municipal Museum, Osaka, 2002, cat. nos 19 and 21, the first in the Sano Art Museum, Shizuoka; another in the British Museum, London, included in the exhibition Freedom of Clay and Brush Through Seven Centuries in Northern China: Tz’u-chou Type Wares, 960-1600 A.D., Indianapolis Museum of Art, Indianapolis, 1980, cat. no. 16, where it is compared with another pillow in the Ashmolean Museum, Oxford, fig. 34; and the fragment of a pillow excavated at the Xiguan kilns, Mixian, Henan province, fig. 35.

Both the motif of confronting birds and the carefully stamped ‘fish-roe’ ground on this pillow, were inspired by designs on metalware. Compare for example a silver casket with two confronting birds, attributed to the Liao dynasty (907-1125), in the Shaanxi History Museum, Xi’an, illustrated in National Treasures. Collection of Rare Cultural Relics of Shaanxi Province, Xi’an, 1998, p. 144.