The centerpiece of the exhibition is a group of drawings with an illustrious provenance from Queen Christina of Sweden (1626–1689), on loan from the Teylers Museum. The museum is the oldest in the Netherlands, having opened in 1784, and its holdings are unique in the world. This collection of Michelangelo drawings has been in the museum since 1790, and many of them have never been shown outside Europe. This marks the first time the drawings have left the Teylers Museum as a group in nearly 15 years and the first time the group of drawings has come to the U.S.

“Michelangelo is widely acknowledged as one of the most talented and influential artists in the history of Western art,” says William Griswold, director of the Cleveland Museum of Art. “He was an exceptional draftsman, and the up-close study of Michelangelo’s drawings is an unparalleled experience, one that we are delighted to bring to visitors in Cleveland.”

Drawing was an essential part of Michelangelo’s creative process, and arguably no artist has used it more effectively in the expression of the human form. Given that Michelangelo burned large quantities of his drawings, Michelangelo: Mind of the Master provides an extraordinary opportunity to examine firsthand a key group of sketches that have survived from the artist’s studio in Rome. Through his drawings, the exhibition explores the range of Michelangelo’s work as a painter, sculptor and architect.

“This group of drawings encapsulates the various ways Michelangelo drew throughout his long career, from anatomical renderings to sketches for the nude male figures on the Sistine Chapel ceiling to drawings from live models for a sculpture on one of the Medici tombs,” says Emily Peters, CMA curator of prints and drawings. “The Teylers group of Michelangelo drawings is among the best preserved in the world, and the red and black chalks used by the artist retain a vibrancy and freshness that allow visitors to really appreciate the immediacy and power of Michelangelo’s thinking on paper.”

The exhibition comprises, in all, 51 drawings by the master, including those drawn on the reverse of other works on view in the show.

The introductory gallery, Drawing in Italy before Michelangelo, provides visitors with examples of drawings made in Florence before Michelangelo’ arrival. Artists in the 1400s primarily used pen and ink, as well as metalpoint, and rarely studied anatomy directly (or for that matter drew nude figures) when planning compositions. This changed markedly around 1500 when Michelangelo came of age. A chronology of Michelangelo’s drawings is presented in the thematic sections that follow:

Michelangelo’s Florence
Due in large part to the funding and patronage of the powerful Medici family, Florence was the center of the Renaissance, which began in Italy in the late 1300s. Born near the city and a resident by age 13, Michelangelo quickly availed himself of the city’s resources and became an apprentice in the workshop of Domenico Ghirlandaio in 1487/88, where he learned to draw with the techniques of the day. By 1490 he was exposed to the powerful Medici circle of scholars, poets and artists, developing a profound appreciation of the art and literature of the classical past. 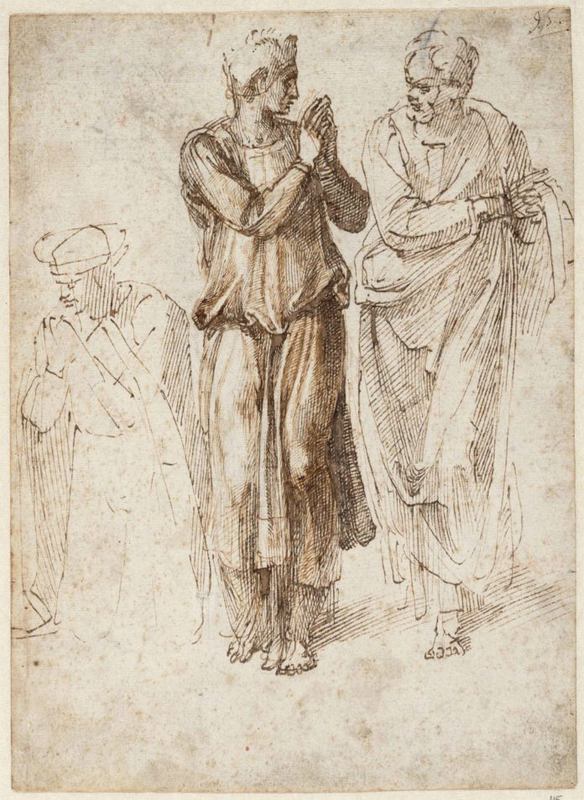 Early Work: New Models for Art
By around 1490 Michelangelo was studying independently in the garden of the Medici family, which was filled with their collection of ancient Greek and Roman sculpture. Around this time, Michelangelo probably saw and sketched from a human cadaver at the hospital of Santo Spirito in Florence. Both ancient sculpture and anatomical study informed Michelangelo’s rendering of the human body for the rest of his life. A handful of his anatomical studies and earliest known drawings are on view in this section. The gallery culminates in two rare studies for his Battle of Cascina fresco (1502–04), commissioned by the city of Florence. 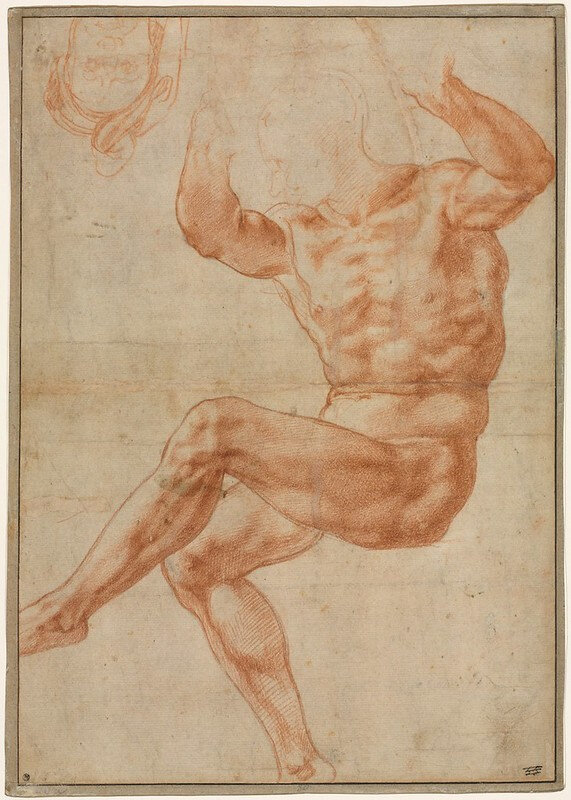 Medici Florence
During the 1510s and 1520s, drawing played a key role in helping Michelangelo to imagine, plan and execute complex commissions for the Medici family and Pope Julius II that combined sculpture and architecture. Drawings in this gallery offer rare insight into Michelangelo’s careful preparations on paper for the New Sacristy, or Medici tombs, at the Basilica of San Lorenzo (1519–34) in Florence, before taking his chisel to the marble block. Others relate to Michelangelo’s commission for the monumental sculptural tomb of Pope Julius II, which was eventually completed and installed in Rome in 1545. 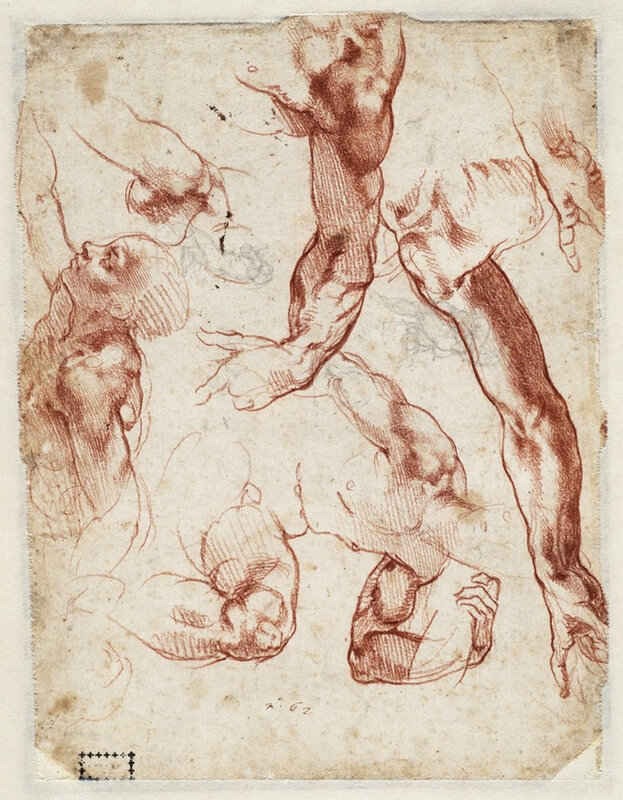 Papal Rome
Continuous commissions called Michelangelo to Rome and defined his life and livelihood until he died in the city at age 88. Drawings relating to Michelangelo’s major projects in Rome are on view in this section. This includes a group of four double-sided drawings that relate to Michelangelo’s preparations for the Sistine Chapel ceiling (1508–12). They date from the second half of his work on the ceiling, after the scaffolding from the first half was removed in the summer of 1511. Upon seeing his work from below for the first time, Michelangelo determined to make the figures larger and the compositions clearer. A key architectural drawing for the dome of the new Saint Peter’s Basilica (begun in 1547) is also on view in this gallery. Following the death of architect Antonio da Sangallo in 1546, Pope Paul III appointed Michelangelo chief architect of the Basilica, entrusting the artist with this highly prestigious project despite his limited experience as an architect. This is one of the few extant studies for Michelangelo’s Battle of Cascina fresco, an early commission from the city of Florence for one wall of the city’s council hall. It signifies a turning point in Michelangelo’s rendering of the nude male form: active in pose and monumental in scale. Michelangelo used red chalk to prepare the poses for the many nude male figures (ignudi) to adorn the spaces between the narrative scenes and the prophets on the Sistine Chapel ceiling. This is one of the most dynamic of the ignudi. This sheet is one of just a few survivors of the dozens (probably hundreds) of drawings that Michelangelo must have made relating to his Last Judgment fresco painted on the altar wall of the Sistine Chapel in Rome (1536–41). He prepared for the complex pose of Saint Lawrence with the efficient use of black chalk that is typical of his later drawings. This rendering of the dome for Saint Peter’s Basilica—probably made at a late stage in Michelangelo’s design of the dome—focuses on his ideas for its lantern.