An exceptionally rare and important blue and white reverse-decorated ‘pomegranate’ dish, Mark and period of Xuande (1426-1435)

An exceptionally rare and important blue and white reverse-decorated ‘pomegranate’ dish, Mark and period of Xuande (1426-1435) 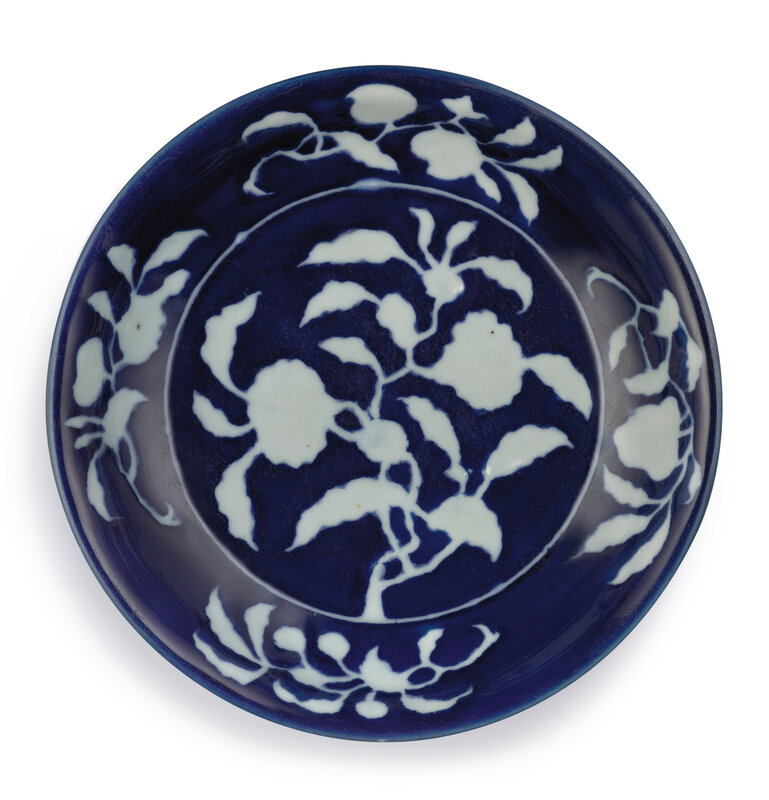 well potted with shallow rounded sides rising from a short tapering foot to an everted rim, the decoration all reserved in white against a rich sacrificial blue glaze, the interior centred with a large medallion enclosing a flowering pomegranate spray with two open blooms and three attendant buds, interspersed with curling foliage, surrounded by a frieze along the well with four detached fruiting branches of peach, lychee, loquat and persimmon, each rendered at one of the four cardinal points, the exterior with four large lotus sprays, the blooms and curling foliage lightly incised to render subtle veining, with a cartouche below the rim inscribed with a six-character reign mark, the base left unglazed and burnt orange in the firing.

This dish represents one of the rarest versions of a highly popular pattern. The Xuande reign (1426-1435) marks the period when interest in Jingdezhen porcelain at court proliferated. To catch up with the unprecedented demand, Jingdezhen’s artisans had to develop hundreds of new designs suitable for the imperial House without becoming repetitive. Assemblages of fruits and flowers were particularly versatile, apt to be arranged in ever changing combinations, varied in colour and adapted to different shapes and sizes. Rigorous quality control assured that the quantities produced nevertheless remained small; and although fruit and flower designs became one of the porcelain painters’ staples, designs nevertheless are highly original.

The current design was in the Xuande period produced in at least four different versions, in underglaze blue on white, underglaze blue against an overglaze-yellow ground, in different shades of high-fired iron-brown on white, as well as in this reserve technique in white against a deep cobalt-blue, all on dishes of similar size and with the reign mark inscribed in a cartouche under the rim. Although the rich cobalt-blue glaze, which in China is known as ‘sacrificial blue’ (ji lan), worked spectacularly well to highlight bright fruit and flower motifs, the present style was not continued for long. It must have been the most time-consuming and accident-prone to create, and in addition the most expensive in terms of the material costs, due to the high quality and quantity of imported cobalt it consumed. The technical expertise and the production time required to successfully create this reverse decoration, which would have far exceeded that of dishes painted in the positive, in blue on white, probably made production on a larger scale of such wares impractical even for the imperial kilns. Apart from occasional trials, this style was more or less abandoned after the Xuande reign, to be properly revived again – like many other early Ming styles – only in the Yongzheng period (1723-1735).

The exact manufacturing process of these white-against-blue decorated pieces is still under debate. Li Yiping has suggested that the design was achieved by fully covering the dish in blue glaze first and once dry, scraping away blue glaze to reveal the design and then applying a transparent glaze before firing it (Jingdezhen chutu Ming Xuande guanyao ciqi/Xuande Imperial Porcelain Excavated at Jingdezhen, Chang Foundation, Taipei, 1998, p. 257). The reverse method has, however, also been suggested, namely that the design was first incised and covered with white glaze, and that the blue glaze was then applied around the design, with only the circular lines perhaps being scratched through the blue afterwards. This method would seem more difficult, but would better explain the faint incising of the motifs.

Five other dishes of this design are recorded, all in museum collections, only four of them of Xuande mark and period, and only two preserved intact: one in the National Palace Museum, Taipei, included in the Museum’s exhibition Mingdai Xuande guanyao jinghua tezhan tulu/Catalogue of the Special Exhibition of Selected Hsüan-te Imperial Porcelains of the Ming Dynasty, Taipei, 1998, cat. no. 198; and one from the collections of Mr and Mrs Walter Sedgwick and John D. Rockefeller 3rd, now in the Asia Society, New York, sold in our London rooms already 9th November 1954, lot 72, and again 2nd July 1968, lot 122, and illustrated in Denise Patry Leidy, Treasures of Asian Art: The Asia Society’s Mr. and Mrs. John D. Rockefeller 3rd Collection, New York, 1994, pl. 178.

A dish of this design, broken in half, is in the study collection of the Palace Museum, Beijing, published in Geng Baochang, ed., Gugong Bowuyuan cang gu taoci ziliao xuancui [Selection of ancient ceramic material from the Palace Museum], Beijing, 2005, vol. 1, pl. 111; and a dish that was deliberately broken, although not obviously being flawed, was recovered from the waste heaps of the Ming imperial kiln site at Jingdezhen, reconstructed from sherds, and included in the Chang Foundation exhibition in 1998, op.cit., cat. no. 84.

Mr and Mrs Walter Sedgwick owned two dishes of this design, the reign-marked one now in the Asia Society, New York, mentioned above, and another without a reign mark, today in the British Museum, London. That dish, which has a very similar unglazed foot and base as the Xuande-marked examples, used to be attributed to c. 1500, but has now been re-dated, also to the Xuande reign, in Jessica Harrison-Hall, Ming Ceramics in the British Museum, London, 2001, no. 4:41. Being the only unmarked example, one might even question whether it could predate the Xuande period, especially since several designs reserved in white on a ground of sacrificial red glaze are well known from the Yongle period (e.g. Jingdezhen Zhushan chutu Yongle guanyao ciqi [Yongle Imperial porcelain excavated at Zhushan, Jingdezhen], Capital Museum, Beijing, 2007, cat. nos 30, 37 and 38).

With a blue glaze, this reserve decoration style had been experimented with already in the late Yuan dynasty (1279-1368), when several different techniques were tried out, none of them achieving such a smooth transition from the blue to the white areas. Not much more than a dozen pieces appear to be remaining from the Yuan period (Regina Krahl, White Dragon in a Sea of Blue, Littleton and Hennessy, Maastricht, 2014). The style does not seem to be preserved from the Hongwu (1368-1398) reign and so far, the only candidate for a Yongle (1403-1424) date would be the unmarked Sedgwick dish mentioned above. By the time this and related dishes were created in the Xuande period, the technique had certainly been perfected.

This design itself continued to be produced for over a century. The identification of the blossoms and fruits, which is difficult from the silhouettes alone, becomes clear when looking at the blue-on-white version of this design. A blue-on-white (fig. 1) and a brown-on-white dish of this pattern, both also inscribed with the Xuande reign mark, are in the National Palace Museum, Taipei, and were included in the Museum’s 1998 exhibition catalogue (op.cit., cat. nos 197 and 199); a blue-against-yellow Xuande version is in the Sir Percival David collection in the British Museum (Regina Krahl and Jessica Harrison-Hall, Chinese Ceramics. Highlights of the Sir Percival David Collection, London, 2009, pl. 35). This blue-and-yellow version eventually became the most popular and continued to be produced from the Chenghua (1465-1487) to the Jiajing (1522-1566) periods. A small number of dishes with other fruit and flower designs in white reserved on blue were also produced in the Xuande period, some larger and some smaller. The larger ones have the mark reserved in a cartouche below the rim, like the present piece, and the bases unglazed, since they probably had to be supported during firing, to prevent sagging; see for example, a dish with a central peony spray in the Palace Museum, Beijing (Mingdai Xuande yuyao ciqi/Imperial Porcelains from the Reign of Xuande in the Ming Dynasty, Beijing, 2015, pl. 89); and one with a lily spray excavated from the kiln site and included in the Chang Foundation exhibition 1998 (op.cit., cat. no. 82-3). Dishes smaller than the present piece have a glazed base, where the reign mark is inscribed within a double circle; a dish of this type, with a gardenia spray in the centre is in the National Palace Museum, Taipei, and was included in the Museum’s 1998 exhibition (op.cit., cat. no. 193).