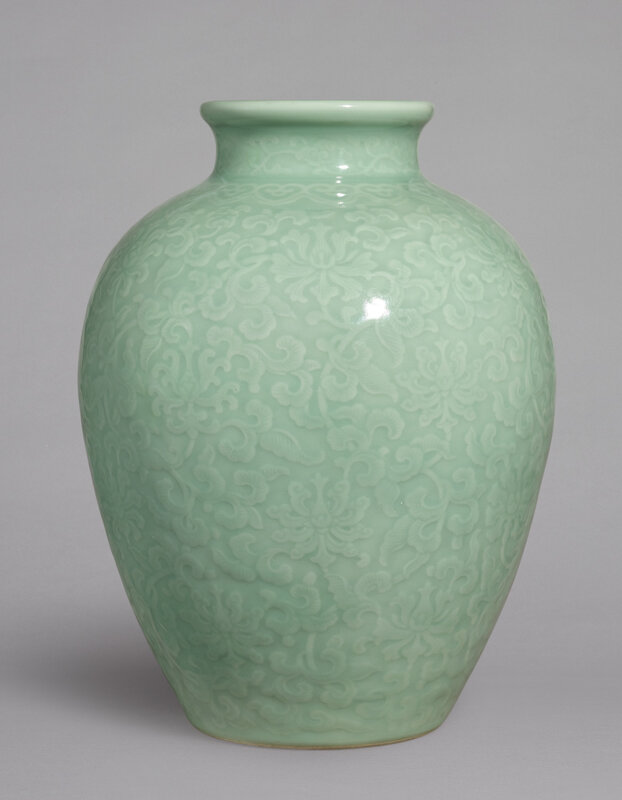 robustly potted with an ovoid body rising from a countersunk base to a short waisted neck and lipped mouth, the exterior crisply moulded with a dense design of large lotus blooms rendered in varying forms, each bloom depicted borne on undulating scrolls issuing curling leaves, all below a band of ruyi lappets, the neck bordered with a frieze enclosing a lingzhi scroll, applied overall with an even pale sage-green glaze transmuting to white on the raised outlines, the base inscribed in underglaze blue with a six-character seal mark.

Note: Decorated in low relief with a marvellous matrix composed of lush leafy lotuses, this jar is a fine example of celadon-glazed wares made during the Qianlong reign. Essentially inspired by Longquan celadon wares in the Ming tradition, the present jar reflects the Qianlong Emperor’s interest in antiquity while adapting ancient aesthetics to suit contemporary taste.

While drawing from Ming celadon traditions, the Qing craftsman has subtly imbued the present jar with a contemporaneity that firmly positions it within the taste of the Qianlong Emperor, as demonstrated by the elongated ovoid contours and the intricacy of the lotus motif on this jar in contrast to its robust Ming prototypes. Moreover, following the innovation by his predecessors, the Qianlong Emperor commissioned revival celadon wares on fine white porcelain body from Jingdezhen, as opposed to coarser Longquan stonewares. The glaze composition was also modified, and a more delicate translucent tone of the celadon glaze was achieved through lessening the amount of iron typically found in earlier Longquan celadons.