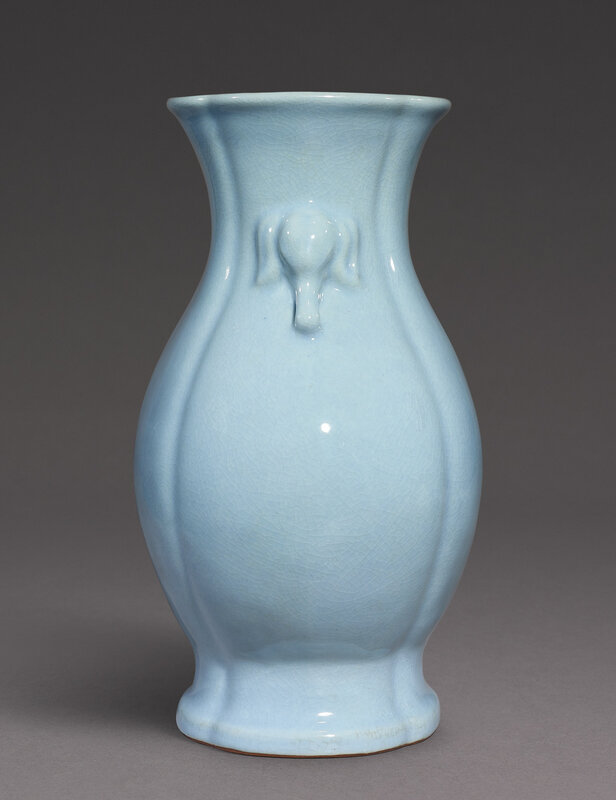 the lobed baluster body divided into four lobes simulating a crabapple bloom, robustly potted and rising from a splayed foot to a flaring neck, the waisted neck flanked by a pair of handles, each modelled in the form of an elephant's head with the curling trunk forming a loop, covered overall with an unctuous pale sky-blue glaze suffused with a dense network of crackles stopping neatly above the footring, the base inscribed in underglaze blue with a six-character seal mark.

Note: Brimming with elegance in both form and design, the present vase is a fine example of monochrome porcelain of the Qianlong period and alludes to the Emperor’s deep appreciation and respect for the past. While its luminous glaze features a subtle network of crackles in imitation of the fabled Ru wares of the Northern Song dynasty (960-1127), its form represents an adaptation of the archaic bronze hu shape. Pleasing to the eye and soft at the touch, the gentle curves of this vase testify to the craftsmen's ability to soften the somewhat austere archaic bronze shape to suit the sophisticated taste of the Qianlong Emperor (r. 1736-1795).

Monochrome vessels required the highest level of skill and precision in every stage of their production, from the purity of the clay and precision of the potting to the evenness of the glaze and control of the firing. This was especially true for vessels of such large dimensions and covered in glazes made in imitation of celebrated Song dynasty wares. The Qianlong Emperor and his predecessor, the Yongzheng Emperor (1723-1735), were truly passionate of ceramic ware produced in the Song period, which they not only collected but also commissioned the imperial kilns at Jingdezhen to reproduce and imitate. In the official record of porcelain supplied to the court from 1735 and compiled by Tang Ying (1682-1756), the brilliant Superintendent of the imperial kilns in Jingdezhen, two types of glazes inspired by Ru ware are listed: “Uncrackled Ju (-chou) glaze, with copper (-coloured) paste… Ju (-chou) glaze with fish-roe crackle of copper (-coloured) paste” (S.W. Bushell, Oriental Ceramic Art, London, 1981 (1896), p. 195). Both glazes were copied from prototypes in the imperial collection which had been sent from Beijing.

This vase is also striking on account of its crisply moulded elephant-head handles, a bold feature popular in the 18th century that dramatically heightens the visual impact of the piece. Elephant handles were favoured by the Qianlong Emperor also for their auspicious symbolism. The elephant is closely associated with Daoism and is the symbol of peace. During the Qianlong reign, real elephants were used in processions when celebrating the Emperor’s birthday, while representing a time for renewal during New Year festivities.

Vases of this elegant form and covered in a brilliant Ru-type glaze are rare, and no other closely related example appears to have been published. A Qianlong mark and period vase of similar dimensions but covered in a guan-type glaze, from the Huaihaitang collection, was included in the exhibition Ethereal Elegance. Porcelain Vases of the Imperial Qing, Art Museum, Institute of Chinese Studies, The Chinese University of Hong Kong, Hong Kong, 2007, cat. no. 32; and another was sold at Christie’s London, 15th May 2007, lot 255.

Qianlong mark and period vases of this form and with similar handles are also known decorated with famille-rose panels against a carved celadon-glazed ground, such as a vase in the Victoria and Albert Museum, London, illustrated in Chinese Porcelain of the Ch’ing Dynasty, London, 1957, pl. 28; a pair in the Liddell collection, illustrated in The Liddell Collection of Old Chinese Porcelain, Bluett & Sons Ltd., London, 1929, pl. 178 and 179; and another from the collection of the Albright-Knox Gallery, Buffalo, sold at Christie’s Hong Kong, 1st October 1991, lot 786, and again in our New York rooms, 19th/20th March 2007, lot 818.