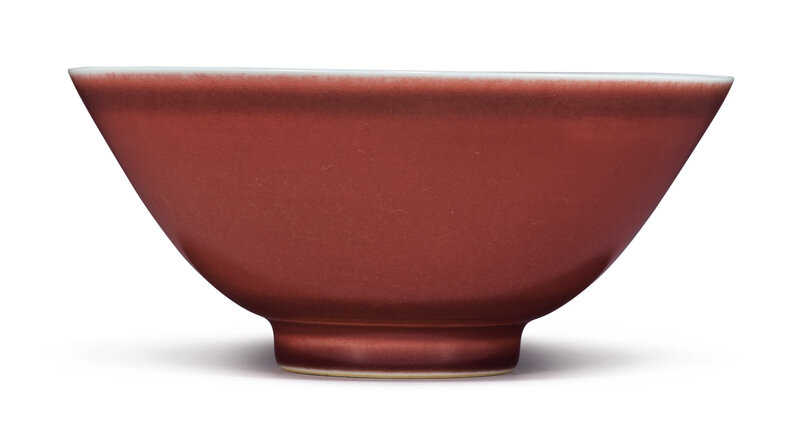 the deep sides flaring and supported on a straight foot, the exterior glazed in a glossy carmine coalescing to a deeper red below the mouth and at the foot, the rim, interior and recessed base glazed white, inscribed to the base with a six-character mark in underglaze blue within a double circle.

Note: Due to its unpredictability in the kiln, copper red glazes proved to be the most challenging for Chinese potters. However, as the color red is associated with celebration and happiness, these glazes were much in demand from the early Ming dynasty onwards. These glazes were revived and perfected during the Qing after a period of disuse towards the end of the Ming dynasty.

For similar examples, see one sold in our Hong Kong rooms, 9th November 1982, lot 242, and another from the estate of Charles Harrison McClintick, sold at Christie's New York, 2nd December 1989, lot 315. See also one with slightly rounder sides, illustrated in Catalogue of a Special Exhibition of Ch'ing-Dynasty Monochrome Porcelains in the National Palace Museum, Taipei, 1981, cat. no. 11.